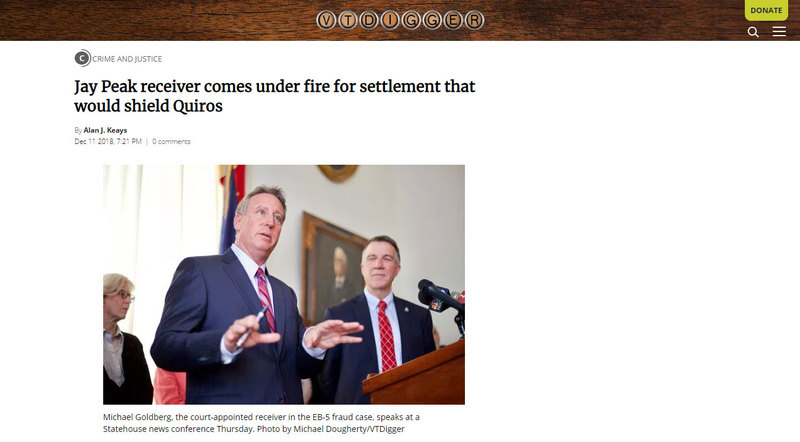 Alawyer for People’s United Bank says the man overseeing two Northeast Kingdom ski resorts at the center of the largest alleged fraud in the state’s history has cut too sweet a deal with the accused “mastermind” of the scheme.

Jonathan Minsker, a Florida attorney representing the bank, filed a motion asking a federal judge to reject a key part of a proposed settlement in a lawsuit filed by Michael Goldberg, a court-appoint receiver, against Ariel Quiros, the former owner of the Burke and Jay Peak resorts.

Minsker called the proposed deal, which would include a “bar order” prohibiting future claims from the receiver and investors in the EB-5 funded projects headed by Quiros, an “inappropriate and unjust windfall” for the Miami businessman.

The attorney added in the recent filing that “the sole purpose of the bar order is to benefit Quiros at the expense of others, such as (People’s), who have been caught up in the litigation arising from Quiros’s misdeeds. There simply is no legal or other basis to reward a wrongdoer such as Quiros in this manner.”

Neither Minsker nor Goldberg could immediately be reached Tuesday for comment.

People’s United Bank, which is headquartered in Bridgeport, Connecticut, has several branches in Vermont.

Federal and state regulars in April 2016 brought lawsuits against Quiros, and his former business partner Bill Stenger, Jay Peak’s former CEO, alleging the pair misused $200 million of the more than $450 million they solicited in EB-5 monies through immigrant investor program.

Regulators also alleged that Quiros siphoned off $55 million for himself, using some of that money meant for the development projects, including massive upgrades at Jay Peak, to pay his personal expenses, such as buying a luxury New York City condo.

Quiros earlier this year agreed to surrender $81 million in assets, including the two ski resorts, to resolve an investor fraud suit brought against him by the U.S. Securities and Exchange Commission.

However, other entities he still had an interest in had a stake in the properties.

As a result of the proposed settlement filed in a separate lawsuit brought by Goldberg, appointed by a federal judge to manage assets at the center of the case, Quiros is waiving any ownership rights in those entities.

Goldberg said that will help clear the way for him to sell both Jay Peak and Burke ski resorts.

“This was an important step because it enables me to distribute the sales proceeds to the victims shortly after the sale rather than engage in protracted litigation with Mr. Quiros over entitlement to the proceeds,” Goldberg said in announcing that proposed settlement last month.

“It will also save the estate hundreds of thousands of dollars in legal fees in obtaining a judgment that might not be very collectible,” he added. “I think the settlement is in the best interest of the victims.”

It would prevent People’s United Bank as well as others from bringing Quiros into pending litigation as a defendant, Minsker wrote, including in a case currently pending in federal court in Vermont alleging People’s “supposedly ‘aided and abetted’” Quiros.

Lawsuits brought by investors have accused People’s United Bank of allowing Quiros to use funds to purchase the ski resort that had been held in escrow accounts to fund certain development projects at the resort.

The proposed bar order is also “so broad” that would also prevent any party from “investigation” of claims against Quiros, Minsker wrote. That would allow the Miami businessman to seek to prevent other parties from issuing a subpoena for his testimony or for documents, Minsker wrote.

Two class-action lawsuits had been filed in federal court in Vermont by alleged defrauded investors, both naming People’s United Bank as a defendant, but not Quiros. Recently, an attorney representing a group of investors in one of those cases dismissed his lawsuit and said he will be joining the other, which remains pending.

In addition to People’s United Bank, former attorneys who represented Quiros have filed an objection to including a bar order as part of the settlement with Quiros. They have been battling for more than a year to recoup some of the $3 million they have said they are owed for defending the developer from investor fraud allegations before he fired them in March 2017.

Judge Darrin P. Gayles has yet to rule on any of the objections to the proposed bar order.

The proposed settlement between Goldberg and Quiros arose out of a lawsuit filed by the receiving In May 2016.

The lawsuit alleged that Raymond James helped Quiros come up with the scheme to commingle and “steal investors’ funds for his own use in breach of partnership agreements.”

More than a year ago, Goldberg reached a settlement with Raymond James in the suit for $150 million, with the financial services company neither admitting nor denying wrongdoing

That settlement with Raymond James also included a bar order, providing protection for the firm against future claims from the receiver and from investors in the EB-5 funded projects.

In the proposed settlement with Quiros, Goldberg has agreed to do his best to seek a similar bar order for the Miami businessman.

Minsker, representing People’s United Bank, said since the proposed settlement is not contingent on the the judge approving the bar order, only that the receiver push for it, the request should be denied.

“In fact,” the attorney wrote, “the only person who would benefit from the entry of the bar order is Quiros — who the SEC has accused of being ‘the architect of an enormous, eight-year-long fraudulent scheme in which he stole more than $55 million’ and “orchestrated the misuse of approximately $200 million.’”

Minsker added, “The Receiver has not, because he cannot, cited any cases in which a Court has entered a bar order that solely benefits the wrongdoer.”