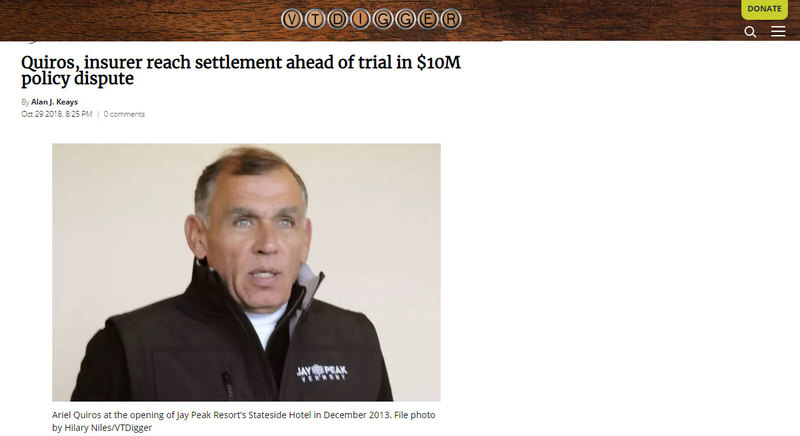 Days before a trial was set to begin, Jay Peak owner Ariel Quiros and his insurance company reached a settlement in a dispute over his claims that the firm should be on the hook to pay his defense expenses up to $10 million as he fights off investor fraud lawsuits.

The settlement in the case comes ahead of opening arguments that were slated to begin in a two-week trial this month in federal court in Miami, where Quiros resides and many of his businesses are based.

Terms of the settlement between Quiros and his insurer, Ironshore Indemnity Inc., a Minnesota-based corporation, have not yet been filed with the court and attorneys for the parties could not immediately be reached Monday for comment on the resolution.

The trial would have been the first one for Quiros, who has faced a slew of lawsuits, from angry investors to government regulators. A trial likely would have revealed many more details behind the largest fraud in the history of the federal EB-5 visa program.

Some of those lawsuits remain pending, though many have resulted in settlements.

The largest hit for Quiros came earlier this year when he agreed to surrender $81 million in assets, including Jay Peak ski resort, to resolve civil investor fraud claims brought against him by the U.S. Securities and Exchange Commission.

News of the settlement in the case involving his insurance company is included in a joint filing submitted by the attorneys for each side. “The Parties have reached a settlement of all claims and counterclaims asserted in this action,” that document stated.

Quiros filed the lawsuit in December 2016, about seven months after federal and state regulators in civil filings accused him and Bill Stenger, Jay Peak’s former president, of misusing $200 million they raised through the EB-5 program to fund massive upgrades at the ski resort and other development projects in northern Vermont.

The Miami businessman alleged in his lawsuit against Ironshore that under a policy he had with the company the firm was required to pay his legal fees in the state and federal actions, as well as others brought by investors.

Those legal bills for Quiros total more than $3 million.

Quiros’ lawsuit claims two consecutive policies, stretching from July 7, 2013, to Aug. 7, 2016, with a $10 million liability limit each, were taken out with Ironshore to insure Q Resorts, Quiros’ holding company that includes Jay Peak.

His attorneys highlight a part of the policy that states the insurance company covers claims during the dates the policy was in effect for a “wrongful act.” Under that policy, Quiros is entitled to “reasonable and necessary” legal fees to cover his defense, the lawsuit states.

The policy, according to the filing, defines a claim to include “a civil, criminal, governmental, regulatory, administrative, or arbitration proceeding made against any insured.” And, the lawsuit adds, a “wrongful act” includes an alleged “act, omission, error, misstatement, misleading statement, neglect or breach of duty.”

Ironshore, in court filings, had strongly contested the allegation it should be pay Quiros’ legal bills. The company also brought a counterclaim seeking to turn the tables against Quiros, arguing that he should be forced to pay for the firm’s cost of defending itself from the lawsuit.

“Quiros is not entitled to relief to the extent he seeks coverage for self-dealing or fraudulent acts under the Policy,” Joseph G. Galardi, a Florida attorney representing the insurer, wrote in a filing.

And, according to that filing, Quiros did not submit his claim in a timely manner and did not, in his application for coverage, disclose alleged actions that led to investor fraud lawsuits against him.

Michael Goldberg, a court-appointed receiver overseeing Jay Peak and other assets belonging to Quiros while the case brought against him by federal regulators remains pending, is also a party in the insurance lawsuit.

Court records added, “The Receiver’s obligations include looking to insurance for coverage of any claims to preserve the assets of the Receivership Estate, which includes Q Resorts.”

Goldberg could not be reached for comment Monday on whether his receivership would recover any money as part of the settlement between Quiros and his insurance company.

However, paperwork filed along with the settlement, said that Judge Darrin P. Gayles, who is presiding in the case brought against Quiros by federal regulators, must sign off on the settlement between Quiros and Ironshore.

“Approval of the settlement is expected to take approximately two to three months,” court records stated.