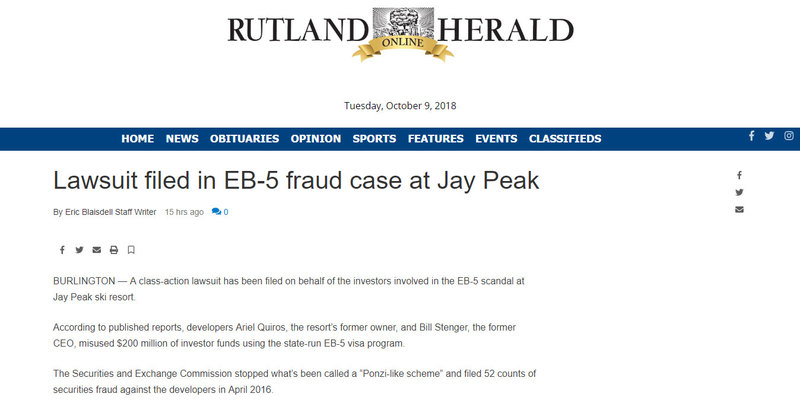 A class-action lawsuit has been filed on behalf of the investors involved in the EB-5 scandal at Jay Peak ski resort.

The Securities and Exchange Commission stopped what’s been called a “Ponzi-like scheme” and filed 52 counts of securities fraud against the developers in April 2016.

Now those that invested in the resort are suing People’s United Bank that held the funds as well as an attorney and his firm the investors say were involved in the scheme. The plaintiffs are from countries such as India, Venezuela and the United Kingdom. The EB-5 program was heralded by officials as a way for wealthy foreign citizens to invest in U.S. projects in exchange for quicker-than-normal access to a green card.

The lawsuit seeks $150 million in damages.

According to the lawsuit filed in U.S. District Court in Burlington last week, when an investor committed to a project at either Jay Peak or Burke Mountain, which was also owned by Quiros, the money was put into an escrow account controlled by People’s United. The suit said the bank then released those funds to Quiros, in violation of the terms the investors agreed to, and Quiros would go on to use those funds for other projects or for his own purposes.

According to the SEC, Quiros used investor money to pay his personal taxes and to buy two luxury condominiums in Manhattan.

“Quiros could not have executed his complex fraudulent scheme for almost eight years without People’s Bank’s knowing and substantial assistance. From the moment of Quiros’s involvement with Jay Peak, People’s Bank misdirected and commingled investor funds for Quiros in clear violation of both its escrow agreements with investors,” the suit said.

The bank did not return a request for comment Monday because it was Indigenous Peoples’ Day in Vermont, or Columbus Day in much of the rest of the U.S., which is a bank holiday.

The lawsuit also said David B. Gordon, a partner at Mitchell Silberberg & Knupp L.L.P., and his law firm were hired to represent Jay Peak in June 2013 as part of the SEC investigation. It said Gordon and MSK were aware of Quiros’ misuse of funds no later than May 2014. That’s when Gordon represented Quiros during a deposition with the SEC where the suit said Quiros admitted to diverting investor funds for his personal use.

“But when the Vermont (Department of Financial Regulation) opened an investigation into Quiros’s dealings on or around December 2014, Gordon and MSK intentionally and actively concealed Quiros’s admissions of fraud, and assured Vermont regulators that the EB-5 Project arrangements gave ‘investors the absolute maximum amount of safety they could have received,’” the suit said.

The lawsuit said Gordon and the firm obstructed the state’s investigation and in doing so they joined a conspiracy to mislead investors. The suit said that makes them just as liable as Quiros in the losses the investors endured.

Gordon did not return a request for comment Monday.