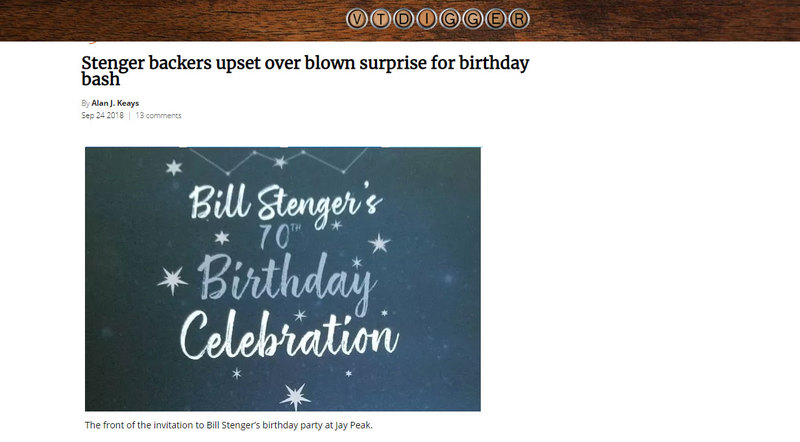 The surprise is blown and VTDigger is to blame.

That’s the take from  attorney as well as his son in response to a story from the news organization published online this weekend about a 70th birthday party planned at Jay Peak for the former resort president who regulators say nearly sent the facility into financial ruin.

“To run a story today about a surprise birthday party that my sister and I planned is over the line,” Jaime Stenger, Bill’s son, wrote to VTDigger in an email Sunday. “This is beyond journalism and is click bait. You should be ashamed of yourselves.”

He added, “I hope your children never have to deal with people like you. It’s disgusting.”

David Cleary, a Rutland attorney who represents Stenger, offered a similar assessment in a call to VTDigger.

He questioned the “newsworthiness” of such a story, and called it “yellow journalism.” He used the word “slander” in discussing the article and accused the news organization of “harassing” Stenger.

The party at Jay Peak is set for 5 p.m. Thursday under the resort’s clubhouse tent, according to an invitation for the event obtained by VTDigger.

According to Michael Goldberg, appointed by a federal judge in April 2016 to oversee Jay Peak and other related properties at the center of the EB-5 investor fraud scandal, the resort isn’t footing the bill for the party.

Neither Goldberg nor Steven Wright, Jay Peak’s general manager, said the party was a surprise in discussing it with VTDigger for the story that ran over the weekend. Bill Stenger told VTDigger last week he was not aware of such a party taking place. 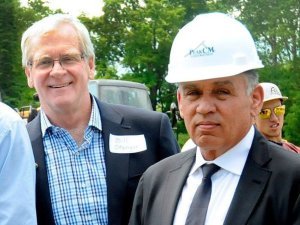 Stenger and his former business partner, Miami developer Ariel Quiros, who owned Jay Peak, were accused by state and federal regulators in lawsuits brought in the spring of 2016 of misusing $200 million of more than $350 million the two developers raised through the EB-5 immigrant investor program.

Both men have since reached settlements with the state of Vermont as well as the U.S. Securities and Exchange Commission. Stenger is paying a $75,000 penalty to the SEC, and $100,000 to the state over four years.

Quiros has settled his cases with state and federal regulators by agreeing to turn over more than $80 million in assets, including Jay Peak.

The Securities and Exchange Commission alleged that more than 800 foreign investors who were seeking green cards through the immigrant investment program were instead bilked through a “Ponzi-like” scheme.

The developments pitched by Stenger and Quiros to those investors include large-scale improvements at Jay Peak, as well as other massive development projects in Vermont’s Northeast Kingdom.

Jaime Stenger, Bill Stenger’s son who works at Jay Peak, in his email to VTDigger, pointed the finger of blame for the “misuse” of funds to Quiros, and says he has the documents that show it.

“You both know that Bill and the State were victims of a ‘con man,’” Jaime Stenger wrote. “Bill is a good man who actually built everything ‘he’ promised.”

He also referred to the largest of the failed projects, a proposed $110 million biomedical research center, known as AnC Bio Vermont, planned for Newport, as “Q’s idea,” referring to Quiros.

Jaime Stenger described VTDigger’s reporting on the Jay Peak scandal over the years as one-sided, adding, “My family has been quiet but incredibly hurt by what you print and what you allow anonymous commenters to say on your site.” 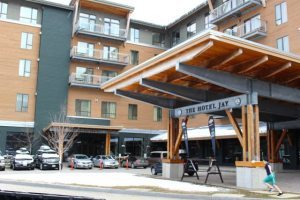 A document filed along with the settlement of the state of Vermont’s case against Stenger outlines the terms of the agreement, and the actions, or lack of actions, he took.

“That William Stenger, for his part, acknowledges and agrees that he did not adequately or properly supervise the administration of the investor funds entrusted to his care and oversight in connection with his role as the individual and/or co-general partner in the various EB-5 projects, which were initiated as a part of the EB-5 Immigrant Investor Visa Program,” the agreement stated.

“That as a result of William Stenger’s failure to properly supervise the investor funds in these various EB-5 projects identified in the State of Vermont’s Amended Complaint previously referenced, the funds became subject to misuse, misappropriation, and commingling, which jeopardized investor rights and opportunities.”

Later, the agreement stated, “Although William Stenger did not receive any of the misappropriated and misused investor funds, he acknowledges that appropriate oversight of the financial transactions involved in the projects would have prevented the misuse, misappropriation, and/or other Improper use of investors’ funds.”

Melissa Visconti, Quiros’ attorney, declined comment Monday on the allegations that Quiros was the “mastermind” of the alleged investor fraud scheme.

“I wish that I could comment because I would really love to, but I really can’t,” she said.

Visconti did say that she didn’t receive an invite to Stenger’s birthday celebration, and neither did Quiros.