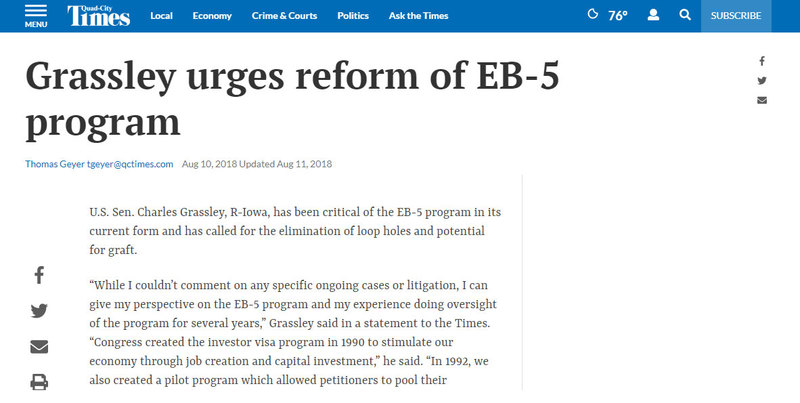 U.S. Sen. Charles Grassley, R-Iowa, has been critical of the EB-5 program in its current form and has called for the elimination of loop holes and potential for graft.

“While I couldn’t comment on any specific ongoing cases or litigation, I can give my perspective on the EB-5 program and my experience doing oversight of the program for several years,” Grassley said in a statement to the Times. “Congress created the investor visa program in 1990 to stimulate our economy through job creation and capital investment,” he said. “In 1992, we also created a pilot program which allowed petitioners to pool their investments in regional centers designated by U.S. Citizenship and Immigration Services. Since the regional center program’s creation, interest in the EB-5 program has grown. Today, almost all EB-5 petitioners invest in one of 903 approved regional centers.

“But as interest in the EB-5 Regional Center Program has grown, so have cases of fraud, corruption and threats to national security,” Grassley said. “There are many, many well-documented examples of the inherent problems in this program. I spoke about some recent examples at a hearing I convened in June. In fact, over the last five years, I along with several of my colleagues have written over 30 oversight letters highlighting the various vulnerabilities of this visa program.

“In recent years, I’ve worked on a bipartisan basis with colleagues in Congress to come up with legislative fixes that would put an end to the fraud and abuse,” he added. “Unfortunately, our work has been undercut by well-funded, big-city real estate interests—who stand to gain the most from the program’s flaws. If Congress is unwilling to implement the legislative reforms necessary to address rampant fraud, abuse and security vulnerabilities, the program should be scrapped altogether. The country and our immigration system would be safer, fairer and less corrupt.”

In a June 19 statement Grassley made as chairman of the Senate Judiciary Committee, he laid out several instances of graft in the program.

• In January, a group of over 120 Chinese nationals sued an Idaho real estate development company and claimed they were fraudulently coerced into investing over $60 million. The real estate company in question allegedly promised there was “zero risk” to invest in their specific EB-5 project, a claim that clearly violates the program’s requirements that capital be at risk. As a result, this specific EB-5 project was terminated by USCIS and the investors’ immigration status was jeopardized — all because this project misrepresented themselves in order to gain quick, easy money.

• In May, the SEC barred two EB-5 companies from selling securities after it was discovered the companies’ president and manager fraudulently raised $22.5 million in EB-5 capital from Chinese investors. According to the Securities and Exchange Commission, these two companies were supposed to use the raised money for the development of a condominium complex. Instead, the companies’ president and his wife stole more than $12 million in order to purchase homes for themselves.

• Also in May, two Maryland residents were charged with defrauding 31 immigrant investors and using money intended to create jobs after Hurricane Katrina for personal gain. An indictment claims the duo contracted with New Orleans to create a $15.5 million investment fund, but instead used the money to buy themselves vacation and rental properties.

In the June statement, Grassley said, “Several months ago, my staff was briefed by officials from the Department’s Fraud Detection and National Security Directorate on its recent EB-5 National Security Concern Assessment.

“Unsurprisingly, the report found that the program is susceptible to Ponzi schemes and financial fraud, and warned that current vetting by law enforcement systems may have missed national security concerns due to insufficiencies in vetting and data collection,” he said.