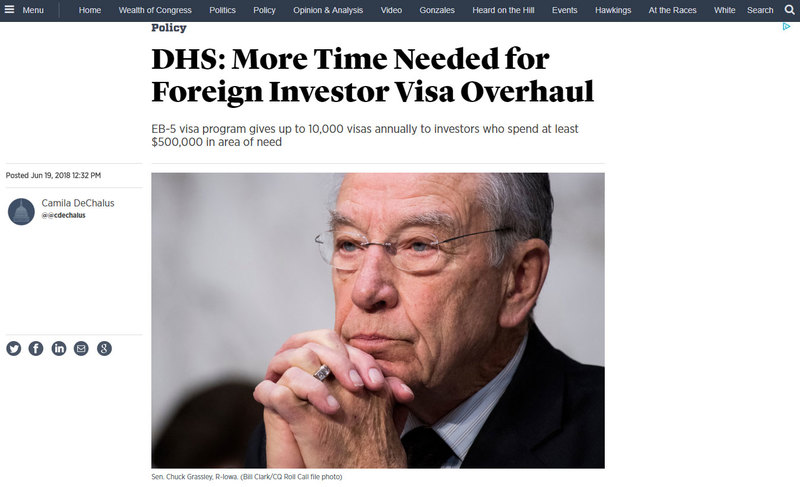 The Trump administration does not expect to finalize an overhaul of the EB-5 investor visa program before it expires Sept. 30, a top Homeland Security Department official told senators Tuesday.

“I don’t know, that would be hard to pull off,” said U.S. Citizenship and Immigration Services Director Lee Francis Cissna before the Senate Judiciary Committee, when asked if a proposed rule will be completed before the end of fiscal 2018.

Although Cissna could not give a timeframe on when the Trump administration would finalize new regulations to overhaul the visa program, he said the department is working toward finalizing the rule.

“From the moment I got sworn in back in October I have been pushing and pushing for those regs to be completed,” he said.

The EB-5 investor visa program allocates up to 10,000 visas annually to foreign nationals, offering them and their families permanent residence and the chance to seek citizenship later if they invest at least $500,000 into an enterprise in the United States in a qualifying rural or low-employment urban area.

The department has yet to finalize changes proposed by the Obama administration that would raise the minimum investment to $1.35 million and give the government more control over developments where investments would qualify.

Chairman Charles E. Grassley, R-Iowa, expressed continued frustration that DHS has not finalized the regulations. He has long pushed for changes to the program to address fraud and national security concerns. “How long does it take bureaucracy to move something? How far up the chain do you have to go to get what they told me they were going to do 18 months ago?” he said.

Sen. Dianne Feinstein of California, the top Democrat on Judiciary, has backed Grassley’s efforts and proposed legislation, co-sponsored by the chairman, that would end the EB-5 program and reallocate the visas to other employment-based visa classifications.

Feinstein has said that overhauling the visa program would eliminate a potential conflict of interest for Jared Kushner, Trump’s son-in-law and a White House adviser, whose family business has received financing from EB-5 investors.

Cissna said Kushner has had no involvement in shaping the department’s EB-5 overhaul.  “I have never talked to him and as far as I know he is not involved in anything we’re doing on EB-5 policy at USCIS,” Cissna said.

Congress last reauthorized the program with no changes in the fiscal 2018 omnibus spending law.

Cissna said Congress should let the program expire if lawmakers don’t pass legislation to overhaul the program. “I have seen cases where people have undermined this program and have committed fraud. I am committed to working with Congress to finding a legislative solution,” he said.

Other powerful senators, notably Majority Whip John Cornyn, R-Texas and Minority Leader Charles E. Schumer, D-N.Y., support the program, however, on the grounds that it spurs investment in U.S. projects and jobs for American workers.

Cornyn said he was “disappointed” that the senators could not agree on legislation that would overhaul the visa program earlier this year.