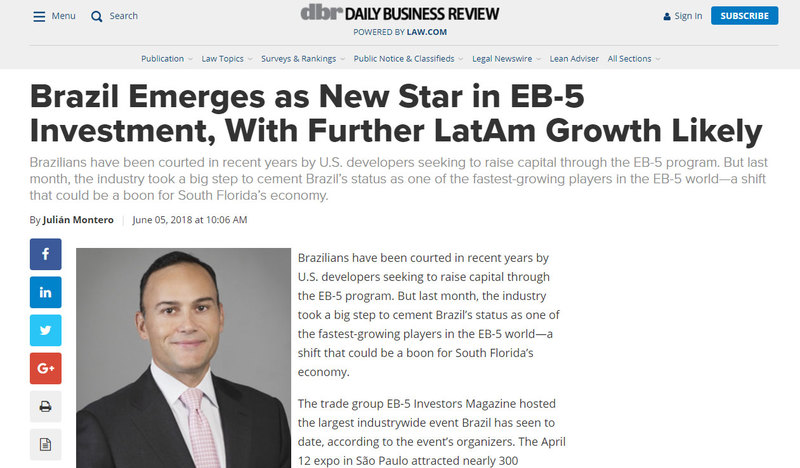 Brazilians have been courted in recent years by U.S. developers seeking to raise capital through the EB-5 program. But last month, the industry took a big step to cement Brazil’s status as one of the fastest-growing players in the EB-5 world—a shift that could be a boon for South Florida’s economy.

Brazilians have been courted in recent years by U.S. developers seeking to raise capital through the EB-5 program. But last month, the industry took a big step to cement Brazil’s status as one of the fastest-growing players in the EB-5 world—a shift that could be a boon for South Florida’s economy.

The trade group EB-5 Investors Magazine hosted the largest industrywide event Brazil has seen to date, according to the event’s organizers. The April 12 expo in São Paulo attracted nearly 300 attendees and brought in key sponsors including EB-5 regional centers from Florida, California and New York and other major stakeholders, such as the financial services company NES Financial. EB-5 Investors Magazine already has plans to return to Brazil in future years, to further educate potential investors and validate the EB-5 program in the local market.

Brazil is the third-largest market for EB-5 immigrant visas, after mainland China and Vietnam, according to 2017 State Department figures. China has long been a dominant force in the EB-5 investment world, but due to the allocation of EB-5 visas per country, Chinese investors are facing a wait of at least a decade to receive visas through the program, according to the Department of Homeland Security’s most recent Visa Bulletin.

This backlog has reduced the number of EB-5 investors from China and incentivized developers to raise capital from alternative markets, such as Brazil, which has a confluence of factors that make it an ideal place to raise EB-5 capital. The country has an estimated 165,000 millionaire households, with a diverse economy that includes manufacturing and professional services, according to the Capgemini Financial Services’ 2017 World Wealth Report. Recent political and economic instability are also driving immigration from Brazil.

With Brazil’s cultural and economic ties to Miami—the country is Florida’s top trade partner—Brazilian nationals’ growing participation in EB-5 investment is likely to boost our local economy. Not only are Latin American investors more likely to put money into Florida’s EB-5 projects than Chinese investors, who often prefer New York, but they also tend to move to Florida once they have their visas. Those first-generation immigrants and their children often start businesses in the United States, further growing the economy.

To be sure, China is still a big player in EB-5, and so is Vietnam, the second-largest market by visas granted in 2017. But Vietnam may not have the same potential for growth as Brazil. Although the Asian country’s number of millionaire households is growing, it’s still around one-tenth of Brazil’s millionaire population. The 282 immigrant visas granted to Brazilian nationals last year are not even a drop in the bucket compared to the potential the market holds.

If EB-5 industry groups continue to focus on wooing Brazilian investors, the conversation may expand to the rest of Latin America. Mexico, Colombia, Venezuela and Argentina all have a significant population of millionaires, cultural ties to the U.S. and other factors driving continued migration. Investors from those countries, like Brazilians, are likely to be interested in Florida.

It’s also a particularly active time for the EB-5 industry as a whole. Investors know the September 30 expiration of the program might lead to changes, and project leaders expect it may soon become harder to raise EB-5 capital. So it’s a perfect time for the industry to continue to hold informational seminars in Brazil. Developers, regional centers and other industry stakeholders can tap into the market’s potential by traveling to Brazil and other Latin American countries to meet with connectors: lawyers, accountants, wealth managers and chambers of commerce. It’s only a matter of time before the U.S. economy begins to see the results.