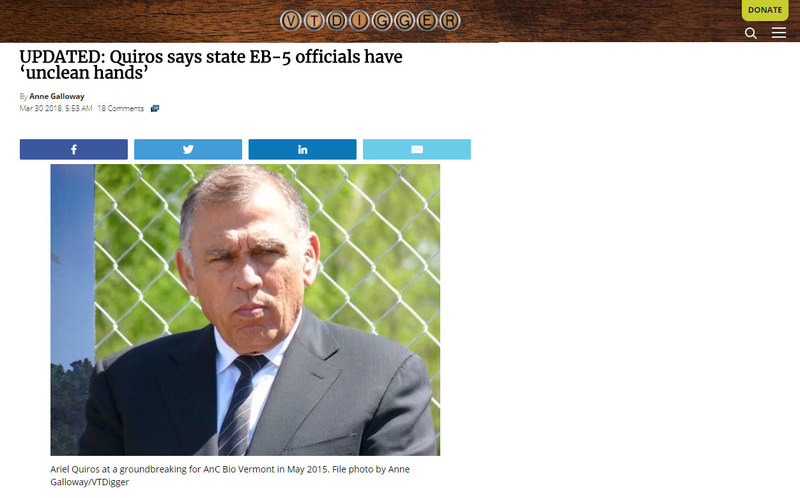 Ariel Quiros, the former owner of Jay Peak Resort, has filed a motion claiming that the state is partially responsible for allowing him to defraud investors.

The Miami businessman says the state, which sued him in April 2016 for defrauding investors, comes to the case with “unclean hands,” a legal term that is used to show the plaintiff is also liable.

Quiros’ attorneys filed an affirmative defense motion Thursday in Washington Superior Court arguing that the state acted unethically and “took no steps to stop Jay Peak or Mr. Quiros from handling [investor] funds in a way that the state knew or should have known violated the EB-5 visa program and/or state securities laws.”

In an affirmative defense, evidence is introduced that, if credible, negates liability even if the defendant committed the alleged acts.

In this case, Melissa Visconti, of the Miami firm Damian and Valori, and Ritchie Berger, of the Burlington firm Dinse Knapp McAndrew, are claiming that the state is also liable, because state officials who were responsible for overseeing the Jay Peak projects did not take steps to protect investors soon enough.

Visconti and Berger claim the state was negligent because officials in the Vermont EB-5 Regional Center allowed Quiros and his business partner Bill Stenger to continue to bring new investors into the developments for a three-year period after officials became aware of misuse of funds in 2013. State officials actively promoted the projects on behalf of Jay Peak during that time.

“The State contributed to and directly caused the legal problems that eventually befell both the Jay Peak EB-5 projects and the Vermont Regional Center and the Agency of Commerce and Community Development,” Visconti and Berger wrote.

Quiros settled with the Securities and Exchange Commission in February on 52 counts of securities fraud and has agreed to surrender $82 million in assets and $2 million in cash to defrauded investors. In April 2016, federal regulators charged Quiros and Stenger with misusing $200 million in foreign investor money. Qurios allegedly put $50 million in his own pocket.

The SEC began investigating the Ponzi-like scheme in 2013. The fraud was conducted under the purview of the state-run regional center over an eight-year period from June 2008 to April 2016. The state, which began its own investigation in 2015 and worked with the SEC on the federal case, allowed Stenger and Quiros to solicit new investors in the Jay Peak projects right up until federal charges were filed. In August 2017, the U.S. Citizenship and Immigration Service announced that it was shutting down the regional center because the state failed to stop the fraud sooner.

The state launched a similar case against Quiros two years ago. State officials and defense attorneys have failed to reach a settlement.

Kate Gallagher, an assistant Vermont Attorney General, who is handling the State v. Quiros case, said in an interview that the affirmative defense motion is “an attempt to distract” the court just days before a hearing Monday on a motion from the state asking Washington Superior Court Judge Mary Teachout for an emergency freeze on Quiros’ assets.

The state hopes to recover $5 million to $10 million from Quiros.

“I haven’t been able to look at this fully, but from what I’ve seen so far this is just absolutely an absurd argument,” Gallagher said.

“Essentially, what Mr. Quiros is saying is, you didn’t stop me from committing fraud,” Gallagher said. “It’s absurd. He’s essentially said, you should have told me I was violating securities laws, but what he doesn’t acknowledge is that he was concealing what he was doing the entire time. So, to suggest that somehow that the state should have stopped him from committing fraud, I mean it’s just the height of hubris in this context.

“It’s not a defense here,” she continued. “It doesn’t provide any kind of argument that would suggest that he did something wrong, which is the point.

The state has 15 days to respond to the counterclaim.

In the latest filing in the case Thursday, Visconti and Berger assert that the state is barred from seeking a second set of damages from Quiros because the state has “unclean hands” and acted in bad faith.

The defense attorneys say while the allegations in the state’s case mirror those in the SEC action and are based on the SEC’s probe, “there is a key difference.”

“The state of Vermont, unlike the SEC, was directly involved in the Jay Peak projects, and owed a duty to investors and creditors to diligently regulate and oversee the EB-5 program in Vermont,” Visconti and Berger write. “The state’s failure to meet those obligations constitutes a critical, and unaddressed, backdrop to its claims.”

USCIS concluded that the state was “responsible for any failures of the state’s EB-5 projects, including the Jay Peak entities, to comply with applicable securities laws.”

Visconti and Berger cite a series of memorandum of understanding between the state and the developers in which the regional center and Jay Peak were to collaborate on oversight, management and promotion of the projects.

The defense attorneys argue that Jay Peak submitted quarterly reporting requirements to the regional center. The Agency of Commerce and Community Development, however, never informed Quiros that the Jay Peak projects might be violating the law or that there were problems with the use of funds.

The commerce agency never confronted Jay Peak or ask Jay Peak “to cease operations based on the alleged violations of state securities laws that now form the basis of the state’s amended complaint,” Visconti and Berger wrote. “Instead the VRC continued to promote the Jay Peak projects and recruit investors until 2016, when the SEC unsealed its Action.

“In short, the VRC sought to perpetuate the Jay Peak investment program despite investor complaints, without diligently investigating the use of investor funds,” they write. “This was a consequential lapse.”

Visconti and Berger also cite the investor lawsuit against the state, Sutton v. State of Vermont, and claims by the Barr Law Group that the Vermont EB-5 Regional Center was actively involved in the investment scheme.

Under the doctrine of “unclean hands,” in which a plaintiff can be accused of acting unethically or in bad faith, the defense attorneys argue that the state is barred from seeking damages because of the actions, inactions and misconduct of state officials.

Gallagher said it’s one thing for investors to say the state was responsible. While she said the state doesn’t think the allegations in the Sutton case are true, but at least you can understand why an investor might make that statement. I mean this statement is saying you didn’t stop me from committing a crime, and oh so now I didn’t commit a crime. That makes no sense.”

“This is not a tort,” she said. “It’s a fraud. So comparative negligence doesn’t even come into play. So this idea that somehow that what the state did made what he did less criminal — I mean it just doesn’t change the fact that he is ultimately responsible for the funds that he stole from investors. Period. That’s it and we’re not jointly and severally liable for him. We had no idea what he was doing. We were not intimately engaged with him in defrauding investors. And that would be basically that there is joint and several liability with Mr. Quiros and the limited partnership defendants because they were in cahoots, working together to you know defraud investors. To suggest that we were working closely with Mr. Quiros to defraud investors is just silly.”

The duty of the state was to the federal government to create jobs, Gallagher said, “not a citation in an MOU.” There isn’t anything in the affirmative defense, she said, that points out what it is in those particular documents gives rise to joint and several liability — “because it doesn’t.”

Gallagher also dismissed the defense attorney’s claim that the state waited too long to investigate. She said the state brought the action in a timely manner. “I mean, they’re just grasping at straws here,” she said.

The defense attorneys also cite the federal court order, which requires that any funds obtained through disgorgement are in the exclusive purview of the receiver.

Gallagher said that isn’t true in the state’s case, and the receiver has filed an affidavit supporting the state’s motion to seek Quiros’ assets. “We’re not seeking restitution here,” she said. “We’re seeking them for our own independent violation of a securities fraud as a government body, not as an investor, and so it’s not a matter of recouping any kind of losses from third parties.”

No date has been set for trial in the state’s case, and discovery is in the preliminary stages.