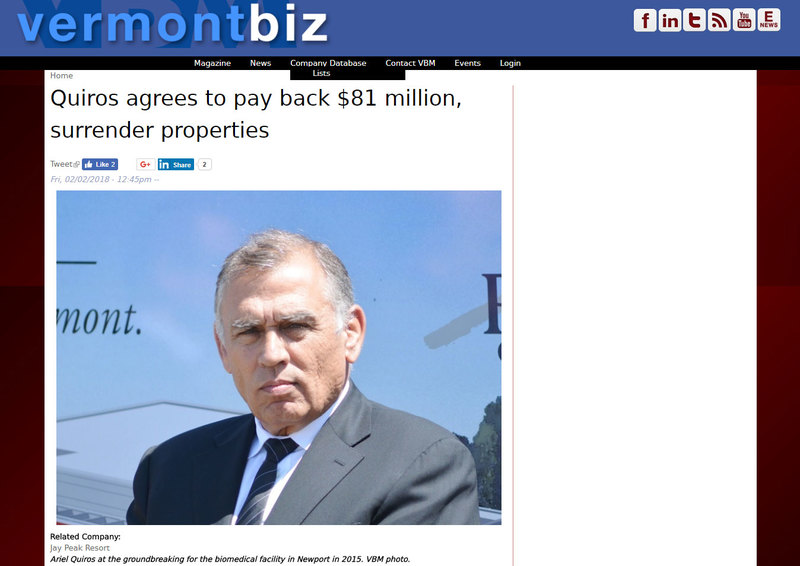 Ariel Quiros at the groundbreaking for the biomedical facility in Newport in 2015.

Vermont Business Magazine Ariel Quiros is no longer the owner of Jay Peak Resort and all told is liable for nearly $82.5 million resulting from the EB-5 fraud on immigrant investors. The Securities and Exchange Commission today announced that the Miami-based businessman behind an alleged scheme involving investments in the Vermont-based ski resort has agreed to pay back more than $81 million of investor money that he used illegally. According to an SEC complaint filed in 2016 (link is external) in federal court in Miami, Quiros allegedly misused more than $50 million in investor funds to purchase a different ski resort and to fund personal expenses such as income taxes and two luxury New York City condominium purchases. Investors were told their money would specifically be used for construction projects at the Jay Peak Resort and a nearby proposed biomedical research facility. Former Jay Peak President Bill Stenger, who previously settled his case involving the EB-5 fraud, will pay a $75,000 fine.

Companies owned by Quiros also allegedly failed to contribute approximately $30 million in investor funds toward Jay Peak construction, with two projects going uncompleted. This jeopardized investors' investments as well as their participation in the EB-5 Immigrant Investor Program under which Quiros and his businesses solicited the money.

In a settlement subject to court approval, Quiros agreed to be held liable for more than $81 million in disgorgement of ill-gotten gains plus a $1 million penalty, and he must forfeit approximately $417,000 in cash that was frozen after the SEC filed the case. Quiros also agreed to surrender ownership of the two condos and ski resort he purchased with investor funds and give up his stake in more than a dozen other properties, including the Jay Peak Resort. Under the proposed settlement, the properties would be turned over to the court-appointed receiver in the case for the purpose of selling them for the benefit of defrauded investors.

"In pursuing fraudulent actors, we seek not only to hold wrongdoers accountable, but also to return as much money as possible to victims," said Eric I. Bustillo, Director of the SEC's Miami Regional Office. "This settlement achieves both objectives by stripping Quiros of the proceeds of his fraudulent scheme and requiring him to turn over valuable property for the benefit of harmed investors."

"The SEC's emergency action halted an alleged massive fraud that Jay Peak, Quiros, and Stenger perpetrated on more than 700 investors from at least 74 countries," said Stephanie Avakian, Co-Director of the SEC's Enforcement Division.

"As a result of the SEC's action, a court-appointed receiver has successfully turned around the resort's finances, and the case will result in hundreds of investors receiving significant portions and, in some cases, all of their investments returned to them," said Steven Peikin, Co-Director of the SEC's Enforcement Division.

The SEC also announced that a business associate of Quiros, William Stenger of Newport, Vermont, agreed to settle the charges against him in the SEC's complaint. While Stenger was not alleged to have personally profited from the fraud, he agreed to pay a $75,000 penalty and be barred along with Quiros from participating in any future EB-5 offerings. Quiros and Stenger agreed to their settlements without admitting or denying the allegations in the SEC's complaint.

The SEC's litigation has been led by Robert K. Levenson and Christopher Martin and supervised by Andrew O. Schiff. The investigation, which is continuing, has been conducted by Brian Theophilus James, Tricia D. Sindler, Michelle Lama, and Mark Dee, and supervised by Chedly C. Dumornay. The SEC appreciates the assistance of the Vermont Department of Financial Regulation, Office of the Vermont Attorney General, and other authorities in Vermont.