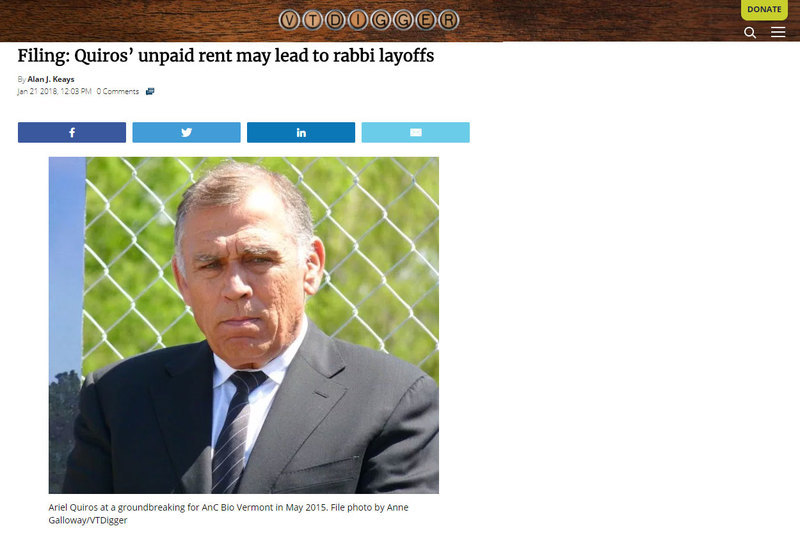 A religious education organization says it may have to reduce its staff of teaching rabbis unless it can collect money owed from a storage lease it had with the developer at the center of the Jay Peak EB-5 investor fraud scandal.

Miami Beach Community Kollel, Inc. has filed a motion seeking to intervene in a federal lawsuit brought by the U.S. Securities and Exchange Commission against that developer, Ariel Quiros.

The motion asks to judge presiding in the case to partially lift an assets freeze in place against Quiros so the organization can collect on the $24,627 it says it is due.

“The failure to receive the rent due is creating economic hardship and the Kollel may be forced to lay off teaching rabbis because of the failure,” the filing stated.

The SEC submitted a filing in the case late Thursday afternoon calling for the judge to deny the organization’s bid to intervene in the case.

“The need for a freeze in an action such as this one, where the defendant has defrauded hundreds of investors and creditors, is clear,” Robert Levenson, an attorney for the SEC, wrote. “Without a freeze to preserve Quiros’ assets for a potential disgorgement judgment for the benefit of investors, there would be hundreds of creditors and investors all attempting to jump over each other in court filings to grab whatever assets they could to the detriment of other creditors and investors.”

The warehouse facility where Quiros had leased space was given to the Miami Beach Community Kollel as a donation, with rent money from the space going to finance the group’s activities, according to the organization’s filing seeking to intervene in the case.

Miami Beach Community Kollel formed in 1995 “to serve the religious and cultural needs of the Jewish community of Miami Beach and South Florida,” according to the organization’s website.

“Its goal is to attract Rabbinical talent to Miami, and to provide educational resources for all members of the Jewish faith,” according to the website. “The Kollel strives to building a stronger Torah environment by enhancing all aspects of Jewish religious life in Miami Beach.”

Quiros, a Miami businessman, is storing furniture, a boat, car parts, an off-road vehicle and two U.S. Army jeeps from World War II, among other items in the storage facility, court documents filed in the case stated.

Quiros, through his company GSI of Dade County Inc., signed a lease in December 2015 for the 8,022-square-foot storage facility in Opa Locka, Florida, the filing stated. The lease called for a monthly payment of $2,782, court records stated.

The lease expired a year later, on Dec. 31, 2016, resulting in a “month to month tenancy,” the motion stated, adding that monthly lease payments continued on time through April 2016.

That’s when the state and federal regulators brought separate investment fraud lawsuits against Quiros and Bill Stenger, former Jay Peak president. The lawsuits accuse the two developers of misusing $200 million raised for improvements at the ski resorts and other development projects in Vermont’s Northeast Kingdom.

The two developers raised the funds through the federal EB-5 visa program. Investors who put up at least $500,000 in a qualified project that meets job creation requirements become eligible for permanent U.S. residency.

As a result of the federal action, Quiros’ assets have been frozen and put under a receivership. Quiros has reached a deal with federal regulators to resolve that case, but it is still awaiting final approval from the SEC. Terms of that settlement have not been disclosed.

Levenson, the SEC attorney, wrote the SEC “sympathizes with the Kollel’s predicament and the cash flow difficulties it has encountered.” He said the receiver intends to establish a claims process for unpaid creditors later in the case.

“The Kollel will have the opportunity through an orderly claims process, in which all claims are considered at the same time and paid according to priority and the amount of available cash, to seek its back rent,” Levenson wrote. “It will have an opportunity to ask the Court for a ruling on its claim if it is not satisfied with the Receiver’s initial determination.”

Between May 2016 and Sept. 14, 2017, no rent payments were made for the storage space, resulting in a total bill, including taxes and fees, of $52,349, according to the recent filing. On Sept. 14, 2017, the court-appointed receiver, Michael Goldberg, paid the organization $44,512 in back rent, but did not pay the accumulated late fees and attorneys fees, the motion stated.

Since that time, the receiver has not paid any rent, resulting in a bill as of Jan. 1 of $24,627, including fees, the filing stated.

“None of the monies owing are owed from before the start of the receivership. All monies owed are the result of the receiver, Quiros, and GSI failing to pay rent as it was due,” the filing stated.

If the request to lift the asset freeze for payment is denied, the organization asked the judge to permit it to start eviction proceedings against Quiros in state court, even as the federal case remains pending.