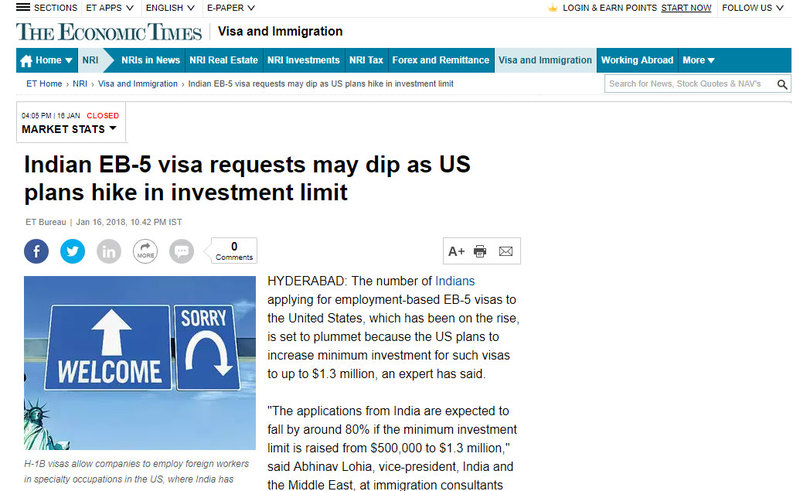 The number of Indians applying for employment-based EB-5 visas to the United States, which has been on the rise, is set to plummet because the US plans to increase minimum investment for such visas to up to $1.3 million, an expert has said.

"The applications from India are expected to fall by around 80% if the minimum investment limit is raised from $500,000 to $1.3 million," said Abhinav Lohia, vice-president, India and the Middle East, at immigration consultants CanAm Enterprise.

EB-5 visa, also known as the 'golden visa', provides permanent US residency for applicants and families upon investing a minimum of $500,000 and creating 10 jobs. The time taken to get a green card, or permanent residency in the US, through EB-5 route is 2-2.5 years while it takes 10-15 years for holders of other visas such as the H-1B to get a green card.

The number of EB-5 visa applicants from India has more than doubled since 2014 and the country is anticipated to surpass Vietnam this fiscal to become the second largest applicant country after China. In 2016-17, more than 500 Indians applied for EB-5 visas against 354 applicants in the previous year. "Sectors like real estate, restaurants and hotels in the US have been the major attraction among the Indian investors through EB-5 route," Lohia said. "Indians also eye Silicon Valley to set up their business through the EB-5 route as it gets easier to reach out to the investor groups," he said.

H-1B visas allow companies to employ foreign workers in specialty occupations in the US, where India has been the biggest beneficiary.