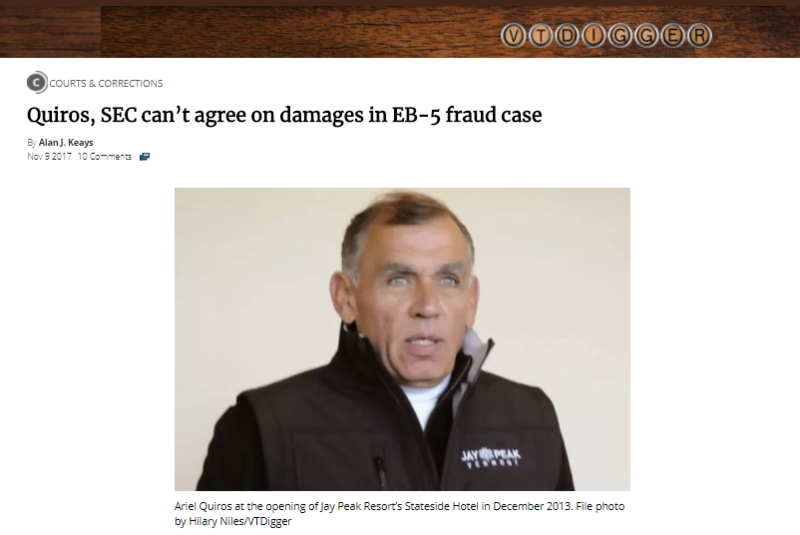 Federal regulators and the attorney for Jay Peak developer Ariel Quiros have failed to reach agreement on how much he should pay in penalties and damages in the largest EB-5 investor fraud case in the history of the program.

Attorneys for the two parties have previously discussed numbers that are far apart.

Lawyers for the U.S. Securities and Exchange Commission once pegged the figure at as high as $191.8 million. Counsel for Quiros, a Miami businessman and Vermont ski mogul, has said that number is much closer to zero.

Lawyers for both sides met last week in a mediation session and apparently failed to narrow that large gap.

“The parties did not reach a settlement, but continue negotiations started at mediation,” Robert Levenson, an SEC attorney, wrote in a one-paragraph filing this week in the case against Quiros pending in federal court in Miami.

Melissa Visconti, a Florida attorney representing Quiros, was out of the office Thursday. However, in response to a question, she replied by email, “I have nothing to report except that we continue to work with the SEC in the hopes of reaching a resolution of the case.”

VIsconti added that she could not comment on whether the parties are close or far apart in the negotiations.

Howard Tescher of the Tescher Mediation Group of Fort Lauderdale, Florida, is serving as mediator.

If the two sides can’t come to an agreement, a court hearing may be needed before Judge Darrin P. Gayles, who is presiding in the case.

The SEC and Quiros reached a partial settlement in the case this summer, with the Northeast KIngdom developer agreeing not to contest the investor fraud allegations against him as they are laid out in a 52-count lawsuit.

As part of that agreement, Quiros is not admitting or denying those allegations. That left the only matter to be decided any monetary damages or penalties Quiros must pay.

Levenson has not publicly commented or included in court filings how much he believes that should be.

At a hearing in May 2016, the SEC had asserted Quiros could be liable for up to $191.8 million in disgorgement, or in “ill-gotten gains.”

Quiros, in earlier filings in SEC case, has claimed the profits he made were legitimate from development fees investors knew about as contained in legal documents. And, if regulators hadn’t halted the developments, his attorneys claimed Quiros would have been able to able to complete later projects that were left unfinished.

When the partial settlement in the case was reached this summer with Quiros, his attorney said she believed that the amount her client should pay is zero, though added that she understood that it would be a matter of negotiation with the SEC.

Lawsuits brought last year by state and federal regulators accuse Quiros, Jay Peak’s owner, and Bill Stenger, the resort’s former president, with misusing more than $200 million they raised through the federal EB-5 immigrant investor program. The money was meant to fund massive upgrades at the resort as well as as other developments in Northeast Kingdom communities.

The SEC also alleged that Quiros “looted” $50 million in investor funds for his personal use, using the money to pay for such big items as his taxes and a luxury condo in New York City.

Foreign investors in the EB-5 visa program become eligible to receive green cards if their investment of at least $500,000 in a qualified project leads to the create of a required amount of jobs.

Stenger settled his case with the SEC in September 2016. He agreed to cooperate with investigators, and a civil penalty may be levied based on his level of cooperation.

The lawsuit by the state of Vermont against the two men remains pending.