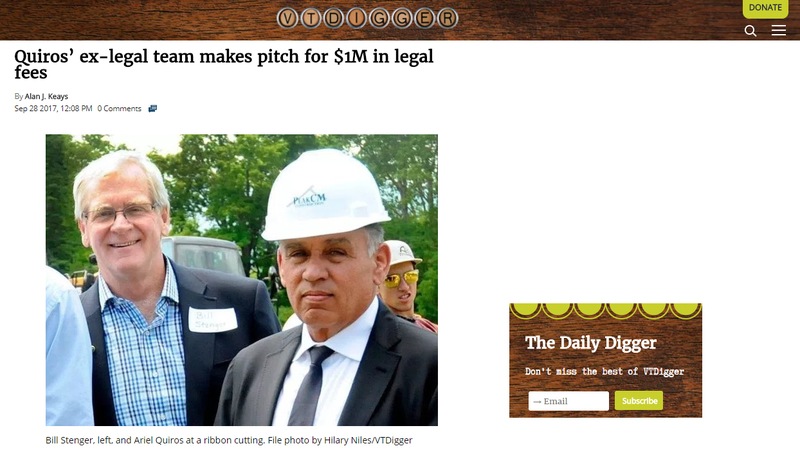 The former legal team for Jay Peak owner Ariel Quiros is asking a judge to support their latest proposal to recoup some of the $3 million they say they are owed for defending the developer from investor fraud allegations before he fired them.

One of Quiros’ former lawyers, Scott Cosgrove, filed a recent motion requesting a judge “modify” a court-ordered freeze of Quiros’ assets to allow the attorneys access to as much as $1 million from his insurance company, Ironshore Indemnity, to cover at least a share of their fees.

“To be clear, if the Court approves this motion, it will not be ordering Ironshore to pay any amount and will not preclude Quiros from objecting, if relevant, outside this litigation to payment by Ironshore to (his former legal team),” Cosgrove wrote on behalf of Quiros’ onetime lawyers.

He added, “The Court would only be modifying the Asset Freeze so that it is not an obstacle to such payment.”

Previously, the U.S. Securities Exchange Commission, which leveled an investor fraud lawsuit against Quiros in April 2016, objected to requests from the developer’s former attorneys to modify the asset freeze, fearing that money will be siphoned away from defrauded investors.

However, neither the SEC nor Michael Goldberg, the court-appointed receiver overseeing Quiros’ frozen assets, including Jay Peak ski resort, object to the latest request.

That’s because, at least in part, Quiros’ former legal team has agreed that if their request is granted, they will drop earlier filings and appeals in the SEC case seeking to intervene in the matter to obtain money to get paid for legal fees they believe they are owed.

That includes dropping an appeal of a ruling earlier this year by Judge Darrin P. Gayles, who is presiding in the SEC against Quiros pending in U.S. District Court in Miami, that denied the developer’s former legal team’s bid to intervene in that case.

The SEC case against Quiros is being heard in Florida, which is where Quiros lives and many of his businesses are based.

Quiros’ ex-lawyers have appealed that ruling by Gayles to the 11th U.S. Circuit of the Court of Appeals in Atlanta, where is it currently pending. That appeal will be dropped, the former attorneys say, if Gayles grants their latest request.

And, their filing states, “(Quiros’ former attorneys) will not file any further motions seeking to modify the asset freeze.”

The SEC wrote in a recent motion that it supported the request by Quiros’ former attorney, calling it “advantageous” to defrauded investors.

“Through (Quiros’ former legal team’s) agreement not to seek any further modification of the asset freeze to pay their fees, it will protect assets belonging to the Receivership for the benefit of investors from being used to pay the two law firms’ fees,” the SEC filing stated.

Gayles has previously declined to step into the $3 million dispute between Quiros and his former legal team over fees.

Quiros submitted a filing this week asking the judge to decline again, contending that the developer’s former attorneys aren’t entitled to any payment from his insurance company.

“(T)herefore, the issue of whether any such payments are subject to the asset freeze should not be before this court,” Melissa Visconti, a Miami attorney now representing Quiros, wrote.

Visconti also contended in her filing that the fees sought by Quiros’ former legal are “unreasonable.”

Quiros last year filed his own lawsuit against his insurer, Ironshore, contending a policy he had with the company provides him up to $10 million in coverage for costs in defending himself against such legal actions as the one brought by the SEC, as well as other parties.

Ironshore has argued it is not responsible for providing that coverage under the policy, However, the company has said while that case works through the legal system, according to court records, it did agree to pay Quiros upfront to cover some of his attorney expenses.

The insurer reached a private “Interim Funding Agreement” with Quiros that called for a payment of up to $1 million to paid by the insurer only to specifically “approved firms,” including those that made up his former legal team.

That is the money Quiros’ former legal team is now seeking to collect.

Judge Gayles has ruled against permitting such payments under that agreement, contending they would be subject to freeze of Quiros’ assets in the SEC case.

Quiros fired his former legal team consisting of attorneys from the firms Leon Cosgrove LLC and Mitchell, Silberberg & Knupp, in March. The move by Quiros to terminate them came almost a year after the SEC and state regulators brought legal action against him.

Cosgrove, in a response filed on behalf of those attorney, wrote, “Over the course of nearly a year, LC and MSK incurred $3,058,203.86 in fees and hard costs defending Quiros in separate lawsuits brought by the SEC, the State of Vermont, a court-appointed receiver, and an army of highly sophisticated plaintiffs’ lawyers.”

He added, “This amount is actually very low, considering the number of matters, the seriousness of alleged wrongdoing, potential criminal exposure, complicated factual and legal issues, and very large amount in controversy.”

Quiros and Bill Stenger, Jay Peak’s former CEO and president, are accused in the state and federal lawsuits of misusing $200 million of the more than $350 million they raised for massive upgrades at the resort and other developments through the federal EB-5 immigrant investor program.

Stenger has since settled his case with the SEC. Quiors has also reached a partial settlement with the SEC, with the only remaining issue to be decided what damages and penalties he must pay, if any.