Class-action fraud suit can go ahead against People’s bank, Quiros 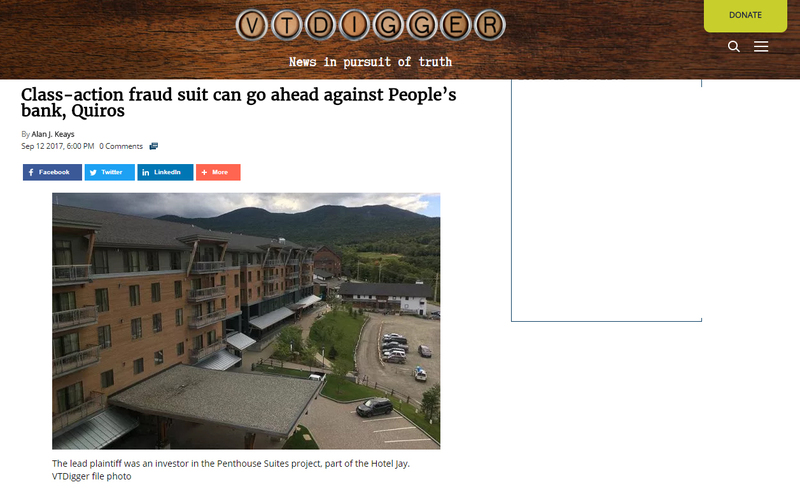 The lead plaintiff was an investor in the Penthouse Suites project, part of the Hotel Jay.

A federal judge has given the green light for a proposed class-action investor fraud lawsuit to proceed against Jay Peak owner Ariel Quiros and a bank he used.

The recent ruling by Judge Federico A. Moreno in federal court in Miami comes over the objections of the bank and the ski resort developer.

The lawsuit, led by Brazilian investor Alexander Daccache, accuses Quiros and People’s United Bank in an alleged scheme to improperly use hundreds of millions of dollars in investor funds meant to pay for developments at Jay Peak and Burke Mountain ski resorts, as well as projects in Newport.

The case had been on hold since earlier this year when one of the defendants, Raymond James & Associates Inc., reached a nearly $150 million settlement with Michael Goldberg, a court-appointed receiver now overseeing the assets at the center of investor fraud allegations brought by federal and state regulators.

The settlement barred further lawsuits against Raymond James and its employees, and as a result the financial institution has been dropped as a defendant from the proposed class-action lawsuit. Also dropped as a defendant was Joel Burstein, Quiros’ former son-in-law, who served as the branch manager of a Raymond James office in Coral Gables, Florida.

The lawsuit by Daccache and other investors alleges People’s played a role in a scheme to defraud them.

“People’s Bank transferred investors’ escrow funds in flagrant violation of the terms of the offering documents and escrow agreements, and in doing so, breached its agreements as well as fiduciary duties it owed to the investors,” Thomas Tucker Ronzetti, an attorney for the investors, wrote in a motion earlier in the case opposing the bank’s bid to be dismissed from the proceeding.

The attorney added, “People’s Bank was a substantial and active participant in a massive fraud that caused millions of dollars in damages to Plaintiffs and the Class.”

People’s has argued for the case to remain on hold at least until the judge ruled on the bank’s filing to dismiss the lawsuit. In that motion, People’s argued in part that the federal court in Miami lacked jurisdiction over the bank, a non-Florida resident which does no business in the state and has no offices there.

The lawsuit is pending in federal court in Miami, which is where Quiros lives and many of his businesses are based. 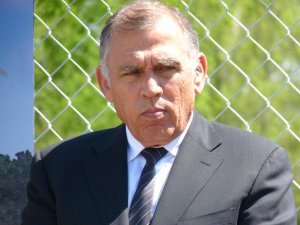 Quiros also has a pending motion to dismiss the case, and he argued for maintaining the stay on the lawsuit until a ruling on that matter.

People’s also contended that if the stay in the case is lifted, the only matter left for the court to decide should be any damages investors may have incurred, especially in light of the recent multimillion-dollar settlement with Raymond James and a recent agreement in a case brought by the U.S. Securities and Exchange Commision against Quiros.

The SEC accuses Quiros and his onetime business partner, Bill Stenger, the former president and CEO at Jay Peak, of raising money from foreign investors to fund specific developments, then using $200 million in a “Ponzi-like” scheme to cover losses in other projects.

In addition, the SEC claims Quiros “looted” $50 million to pay for personal expenses, including a luxury condo in New York City.

In that agreement with the SEC, Quiros promises not to challenge the allegations against him, leaving open only the question of any damages or penalties he should pay.

The Raymond James settlement resolves claims Goldberg brought over the firm’s alleged role in the “Ponzi-like” scheme. Money from the settlement goes to several entities, including unpaid contractors, and to provide refunds to certain investors. Money also will be used to finish some of the projects.

People’s United Bank argued in its filing that any damages in the class-action case should be offset by any money investors have received from previous settlements.

Daccache, the lead plaintiff, who lives in Brazil, invested $500,000 in the Penthouse Suites project, which is part of the Hotel Jay, in 2010 under the federal EB-5 visa program. EB-5 investors put up at least $500,000, plus an administrative fee, in a qualified project. If that investment creates at least 10 jobs, the investor becomes eligible for permanent U.S. residency.

According to the Daccache lawsuit, the action was brought on behalf of a proposed class of 836 people who invested more than $400 million in the projects headed by Quiros and Stenger.

Jonathan E. Minsker, a Florida attorney representing People’s United, could not be reached Tuesday for comment.

Melissa Visconti, Quiros’ attorney, said in an email Tuesday that she was disappointed but not surprised by the ruling to lift the stay.

“It is hard to get a stay under the circumstances we had,” she wrote. “We will now work with all parties to set a workable discovery and litigation schedule.”