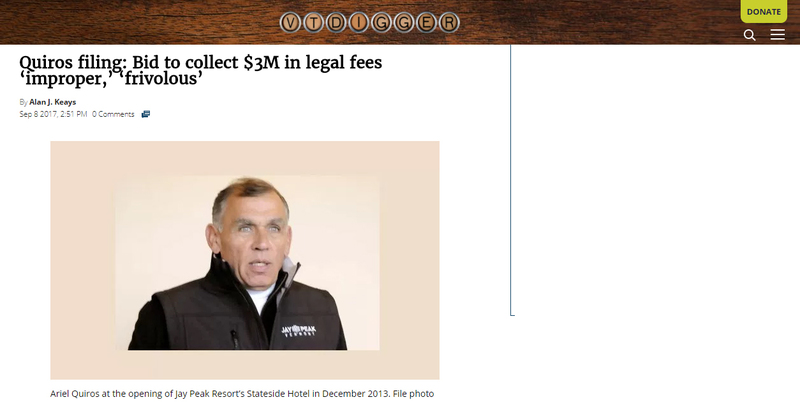 Jay Peak owner Ariel Quiros is firing back at his former legal team’s request to collect $3 million in fees for defending him from investor fraud allegations before they were fired.

Quiros’ former attorneys have submitted a slew of legal filings in recent months seeking payment of the fees, only to rebuffed by a judge who has refused to become involved in the dispute.

The law firms are acting against the interests of their former client and pursuing claims that, as this Court has already observed, are a private claim between a client and his former lawyers and have no place in this action,” Visconti wrote in a nine-page filing.

Visconti reiterated Thursday a position she has previously stated about the payment of fees for her client’s former lawyers, saying it was a matter for a separate legal proceeding, and should not be in brought into the investor fraud case.

She added that she was hopeful that the judge would not hold a hearing on the matter, but instead issue a ruling in her client’s favor based on the filings.

Scott Cosgrove, an attorney representing Quiros’ former lawyers, could not be reached Thursday for comment.

Quiros terminated his previous legal team, which included attorneys from the firms Leon Cosgrove LLC and Mitchell, Silberberg & Knupp, in March. Those attorneys had represented Quiros for almost a year against legal action taken against him by state regulators and the U.S. Securities and Exchange Commission, as well as a host of other investor fraud lawsuits.

The SEC accuses Quiros and his former business partner, Bill Stenger, Jay Peak’s former CEO and president, of misusing $200 million of more than $350 million raised through the federal EB-5 immigrant investor program to fund development projects at the resort and nearby towns.

In addition, the SEC alleges that Quiros “looted” $50 million in investor funds to pay his personal expenses, including taxes and the purchase of New York City luxury condo.

Quiros recently reached a partial settlement with the SEC in which he agreed not to challenge the allegations him, leaving only the matter of damages and penalties to be determined.

His former legal team stated in their filing that the $3 million they are trying to collect in legal fees and expenses is not excessive.

“This amount is actually very low, considering the number of matters, the seriousness of alleged wrongdoing, potential criminal exposure, complicated factual and legal issues, and very large amount in controversy,’ Cosgrove wrote on behalf of Quiros’ past lawyers.

They have asked federal Judge Darrin P. Gayles, who is presiding in the SEC case, to modify a freeze on Quiros’ assets to allow them access to funds so they can get paid for their past work. The judge has taken no action on that request.

Earlier this year, Gayles rejected a request from the former legal team in a bid to get payment, ruling it was not a dispute that he would take up. Quiros’ past lawyers have appealed that decision to the 11th U.S. Circuit Court of Appeals in Atlanta, where it remains pending.

Visconti, Quiros’ new attorney, wrote in her recent filing that the appeal should play out before any consideration is given to any new attempt to collect the fees.

Last month’s motion by Quiros’ former lawyers covers the same issues as the appeal before the 11th Circuit, Visconti wrote, adding that the motion “should be denied to avoid the confusion and waste of time that would result from dual jurisdiction.”

Michael Goldberg, the court-appointed receiver overseeing Quiros’ frozen assets, including the Jay Peak ski resort, also recently filed a motion opposing the move to collect the past legal fees at this time.

The fired attorneys contended in the latest motion that a recently approved $150 million settlement between Goldberg and Raymond James & Associates Inc., a financial institution used by Quiros, had changed the situation from time of their previous filing. The settlement with Raymond James resolved claims that the firm’s employees assisted the developer in carrying out the “Ponzi-like” scheme described by the SEC in court records.

Goldberg, in his response, said that all the funds from the Raymond James settlement have already been allocated, with the money going to pay bills for contractors, completing unfinished projects and reimbursing defrauded investors.

He termed the filing by the former attorneys for Quiros “an opportunistic attempt to capitalize” on the Raymond James settlement to collect their unpaid fees.