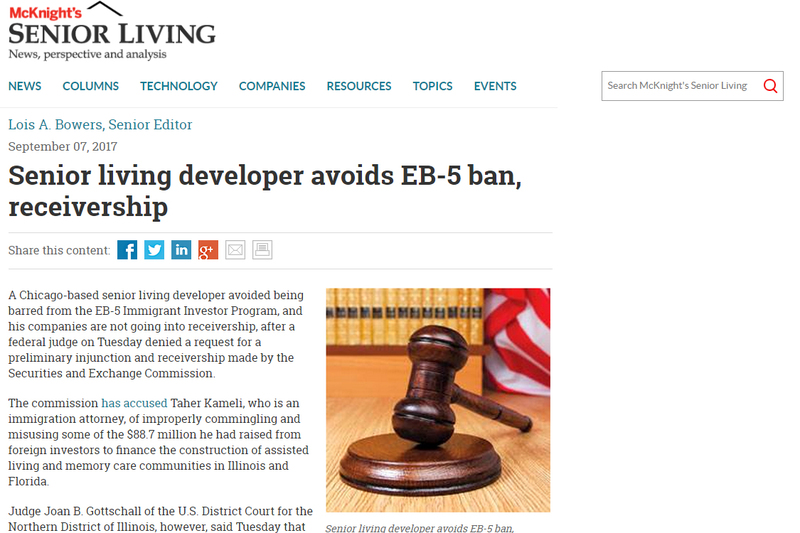 A Chicago-based senior living developer avoided being barred from the EB-5 Immigrant Investor Program, and his companies are not going into receivership, after a federal judge on Tuesday denied a request for a preliminary injunction and receivership made by the Securities and Exchange Commission.

The commission has accused Taher Kameli, who is an immigration attorney, of improperly commingling and misusing some of the $88.7 million he had raised from foreign investors to finance the construction of assisted living and memory care communities in Illinois and Florida.

Judge Joan B. Gottschall of the U.S. District Court for the Northern District of Illinois, however, said Tuesday that the commission “in numerous instances has not presented fully developed arguments to show why defendants' actions violated securities laws.”

Gottschall also said the SEC had not addressed evidence presented by the defendants — which in addition to Kameli include his companies, Chicagoland Foreign Investment Group and American Enterprise Pioneers — to refute the commission's claims. Therefore, she added, the SEC's request for ancillary relief and receivership also were denied.

“I am glad that the judge provided the defendants with an opportunity to fairly present their side of the case in this stage of the proceedings,” Kameli told McKnight's Senior Living on Wednesday. The case is ongoing.

In June, the SEC accused Kameli and his companies of defrauding at least 226 investors — most of them from China or Iran — who were participating in the EB-5 Immigrant Investor Program from 2009 to 2016. The program offers a potential path to citizenship for foreigners who invest at least $500,000 in specific projects that create at least 10 permanent full-time jobs in the United States.

Rather than use investor funds solely for the senior living project for which an investor was solicited, the SEC alleged, Kameli diverted millions of dollars to fund other projects and to make unrelated payments. He also allegedly spent a significant portion of investor proceeds for the benefit of himself, his brother and his companies, according to the commission.

Kameli and his companies sought investors for four communities in Illinois and four in Florida, the SEC said. Only one community, Bright Oaks of Aurora in Aurora, IL, has been completed, according to the commission. That community is listed as a relief defendant in the lawsuit.