Quiros can use IRS refund on taxes, $15,000-a-month expenses 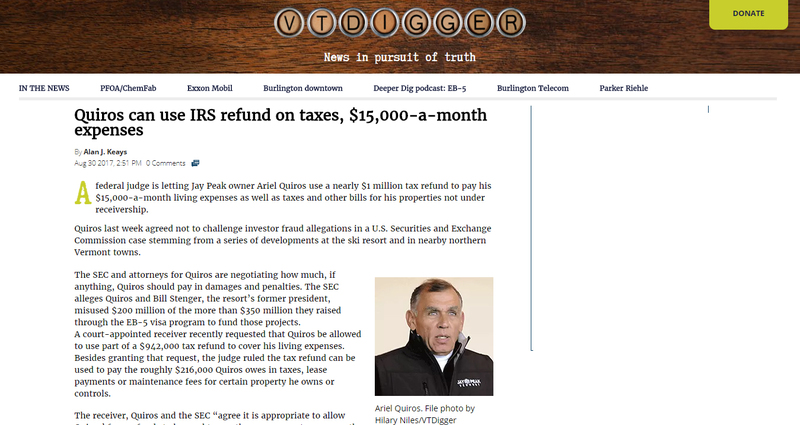 A federal judge is letting Jay Peak owner Ariel Quiros use a nearly $1 million tax refund to pay his $15,000-a-month living expenses as well as taxes and other bills for his properties not under receivership.

Quiros last week agreed not to challenge investor fraud allegations in a U.S. Securities and Exchange Commission case stemming from a series of developments at the ski resort and in nearby northern Vermont towns.

The SEC and attorneys for Quiros are negotiating how much, if anything, Quiros should pay in damages and penalties. The SEC alleges Quiros and Bill Stenger, the resort’s former president, misused $200 million of the more than $350 million they raised through the EB-5 visa program to fund those projects.

A court-appointed receiver recently requested that Quiros be allowed to use part of a $942,000 tax refund to cover his living expenses. Besides granting that request, the judge ruled the tax refund can be used to pay the roughly $216,000 Quiros owes in taxes, lease payments or maintenance fees for certain property he owns or controls.

The receiver, Quiros and the SEC “agree it is appropriate to allow Quiros’ frozen funds to be used to pay these expenses to preserve the status quo and the value of these assets” while the case is pending, wrote Michael Goldberg, the court-appointed receiver overseeing Quiros’ other assets, including Jay Peak ski resort, that are part of the SEC case.

Judge Darrin P. Gayles had previously ordered that the $15,000-a-month living expenses come from a mortgage on a luxury condo Quiros owns in New York City. Those funds are no longer available because Goldberg paid off the mortgage to avoid foreclosure, according to the recent filing.

The judge’s new order allows the tax refund to be used to pay living expenses from September through December, which would lead to a four-month total of $60,000.

The tax refund check was directed to Quiros and his wife jointly, Goldberg wrote in the filing. The SEC and Goldberg have argued the entire refund is subject to an earlier court-ordered freeze of Quiros’ assets associated with the fraud case.

Quiros, through his attorney, has contended that only his half of the money is subject to that freeze.

To avoid litigation, all parties agreed Quiros will endorse the entire check to Goldberg for his firm to hold until there’s a final determination about the disposition of the refund, Goldberg wrote.

Goldberg wrote that he believes “certain of the properties were purchased or maintained with investor funds and the receivership may have a claim to those entities,” which would ultimately aid investors in recovering funds.

So far, the court has already approved Quiros using up to $275,000 of the refund to pay the attorneys he hired in March from the firm Damian & Valori LLP. If Quiros is successful in his lawsuit against his insurance company for coverage of his defense costs, that money would be reimbursed to the receivership.

Quiros fired his previous lawyers in March, but they are suing to recover more than $3 million they say he owes them.

The receiver’s filing does not list the value of the properties, just the amount owed in the taxes. An attachment to the recent filing listed 30 entities on which Quiros owes taxes, maintenance fees or other costs.

The properties and other items on that list are among the assets frozen in the case, but are not part of the receivership, according to Melissa Visconti, the attorney representing Quiros.

“Because he has no money, all his money is frozen, all those cost have just been sitting there and mounting,” Visconti said Tuesday.

She declined to say exactly why Quiros and wife obtained such a large refund check other than for an overpayment of taxes.

For Quiros’ listed primary residence in Key Biscayne, Florida, he owes property taxes of $28,103 for 2016.

In another example, according to the filing, Quiros hasn’t paid a monthly fee for an office condo in Miami since the SEC case was filed in April 2016.

Quiros has also been leasing an 8,022-square-foot warehouse in Opa Locka, Florida, with a monthly payment of $2,782, which also hasn’t been paid since the filing of the SEC lawsuit. He is storing furniture, a boat, car parts, an off-road vehicle and two U.S. Army jeeps from World War II, the filing states.

Goldberg wrote that there is enough value in the items stored in the warehouse to keep paying the rent.

The listing contains 14 properties in Vermont, including 12 in Jay, one in Lyndonville and another in East Burke. The taxes on those properties range from $16,000 to a little more than $1,000. The properties include residences, condos and land.