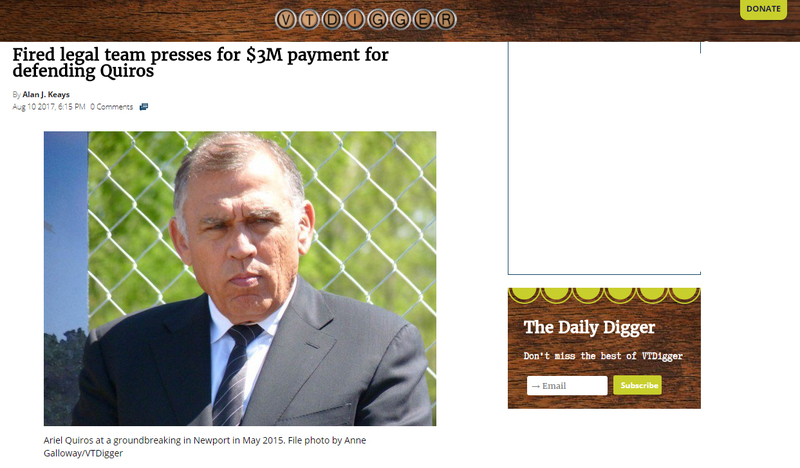 Ariel Quiros at a groundbreaking in Newport in May 2015.

Former attorneys for Jay Peak owner Ariel Quiros are renewing their push to get paid more than $3 million in legal fees they racked up defending the developer from investor fraud allegations before he fired them.

However, his new attorney says the former legal team is going about getting paid from her client the wrong way.

“We don’t agree with their approach,” Melissa Visconti, Quiros’ current attorney, said Thursday. “At some point they are entitled to go after their fees because they had a contract with him. He’s never said that’s not the case. But this isn’t how it works.”

Instead of seeking to intervene in the investor fraud case brought against her client by the U.S. Securities and Exchange Commission, Visconti said the former attorneys could file a separate legal action.

“They can go after their reasonable fees based on the amount on the time that they worked at a reasonable hourly rate,” she said.

Quiros fired that legal team, consisting of attorneys from the firms Leon Cosgrove LLC and Mitchell, Silberberg & Knupp, in March. The move by Quiros to terminate them came almost a year after the U.S. Securities and Exchange Commission and state regulators brought legal action against him.

One of Quiros’ former lawyers, Scott Cosgrove, wrote in a recent filing that, “Over the course of nearly a year, LC and MSK incurred $3,058,203.86 in fees and hard costs defending Quiros in separate lawsuits brought by the SEC, the State of Vermont, a court-appointed receiver, and an army of highly sophisticated plaintiffs’ lawyers.”

“This amount is actually very low, considering the number of matters, the seriousness of alleged wrongdoing, potential criminal exposure, complicated factual and legal issues, and very large amount in controversy.”

Cosgrove did not return a call Thursday seeking comment.

Quiros and Bill Stenger, Jay Peak’s former CEO and president, are accused in the state and federal lawsuits of misusing $200 million of the more than $350 million they raised for massive upgrades at the resort and other developments through the federal EB-5 visa program.

Cosgrove, in the recent filing, is asking a judge presiding in the SEC case to unfreeze about $2 million of Quiros’ assets to allow the legal bills to be paid.

Cosgrove also asked that $1 million from Quiros’ past insurance company cover the remaining portion of the expenses. Quiros and that insurance company, Ironshore Indemnity, are currently involved in litigation over whether his legal bills should be covered under his policy.

Previously, Judge Darrin P. Gayles, presiding in the SEC case against Quiros, declined to step into the $3 million dispute between Quiros and his former legal team.

The latest filing does address that decision by the judge.

“The Court has already indicated that it does not want to resolve a fee dispute, and LC and MSK agree that this not the place for Quiros to do so,” Cosgrove wrote in the filing.

“But, to allow Quiros to procure legal services through promises only to renege on the eve of payment does nothing to protect investors and the public from Quiros (the stated purpose of the asset freeze), but rather allows this Court and its asset freeze to become a mechanism to take unfair advantage of LC and MSK.”

The fired attorneys also argue in their latest filing the situation has changed. They contend that’s because of a nearly $150 million settlement reached between a court-appointed receiver currently overseeing Quiros’ frozen assets and Raymond James & Associates Inc., a financial institution used by the developer.

“Now, the Receiver has secured a monumental $150 million settlement from Raymond James,” Cosgrove wrote in the filing, “which assures investors will not suffer out-of-pocket losses and – given that the value of assets still frozen by the Court likely exceed $150 million more – means there are ample funds available for very large additional payments to investors or the Government (including for punishment), if they are warranted or agreed to.”

Cosgrove also states that the judge has allowed Quiros’ new attorneys, from the firm Damian & Valori, to be paid $275,000 “upfront” from frozen assets.

“By contrast, LC and MSK were to be paid in arrears and were only denied payment after incurring time and money defending Quiros,” Cosgrove wrote.

In October, the judge allowed Quiros to use $80,000 from proceeds of a mortgage he took out on a New York City condo to pay the legal bills he had accumulated at that time. That $80,000 approved by the judge was well short of the almost $1.5 million the attorneys had been seeking.

“A payment of $80,000 represented a massive loss for Quiros’s legal advisers,” Cosgrove wrote in the recent filing. “Without any assurance of further payment, LC and MSK were on the verge of withdrawing as counsel.”

However, the filing stated, Quiros “implored” them to keep working for him, even as the legal bills kept mounting.

The filing added that Quiros’ new lead counsel, Visconti, had “expressed assurances” that she wanted his prior attorneys to be paid and she was “impressed” with their work.

“It appears she was trying to gain assistance during the transition, in an unavailing attempt to secure funds for herself to which she was not contractually entitled,” Cosgrove wrote. “Ms. Visconti has subsequently sought to block any payments for MSK and LC for a year’s work.”

Visconti reiterated Thursday that Quiros’ former attorneys need to the follow the proper procedure to get paid.

And she added, “It’s got to be a reasonable amount of time and money.”