Rags-to-riches: Bellevue developer who conned hundreds gets 4 years in prison 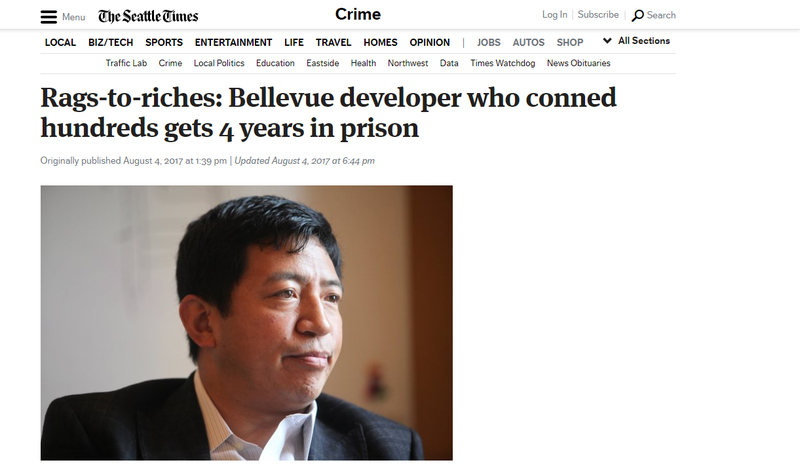 Developer Lobsang Dargey was sentenced Friday for conspiracy to commit wire fraud and concealing information from the federal government, charges that stemmed from his diversion of millions of dollars gathered from some 280 Chinese investors who hoped to earn green cards for permanent U.S. residency under the EB-5 visa program.

Lobsang Dargey, 43, scammed about 280 investors from China out of $24.2 million, money he diverted while collecting $235 million to invest in projects they hoped would lead to green cards and U.S. residency.

His life began in Tibet, where he slept near animals in a farmhouse and trekked across the Himalayan Mountains as an impoverished young man. Improbably, Lobsang Dargey eventually scrapped his way to the American dream — settling in a luxurious Bellevue home as a successful developer, becoming a U.S. citizen married to the sister of a tennis star, raising three kids.

Dargey’s fairytale life, it turned out, involved one of the biggest frauds of the decade in the Seattle area, scamming hundreds of investors out of tens of millions of dollars for projects from Everett to Belltown.

On Friday, two years after the scheme was uncovered by federal authorities, a federal judge in Seattle sentenced him to four years in prison, followed by three years of supervised release. In addition, he had previously agreed to pay about $24 million in restitution.

The case was one of the first of its kind in the country, involving a federal law that allows foreign investors to get green cards in exchange for funding job-creating projects in the United States. The EB-5 program, as it is known, has been particularly popular in helping fuel Seattle’s record development boom.

Prosecutors with the U.S. Attorney’s Office said Dargey had raised some $235 million in all, luring people in China with a “green card guarantee.” He obtained at least $500,000 from each foreigner for projects he actually wasn’t investing in himself.

Instead, he used money he siphoned off to buy a $2.5 million house in Bellevue and prop up his other projects, and went on lavish shopping sprees totaling hundreds of thousands of dollars. He dropped nearly $32,000 on one trip to Tiffany’s and rang up a $1,387 dinner tab at John Howie Steak in Bellevue. He also used phony bank statements to obtain big loans from private banks and institutional investors.

Assistant U.S. Attorney Seth Wilkinson said Dargey preyed on his foreign investors’ desire to experience the same American dream Dargey had realized. A victim’s representative who spoke through a translator at the sentencing said the fraud “shattered those dreams,” as it did for many other Chinese families.

Many of his victims reported that they had sold their properties in China to raise the investment funds, and had moved to the United States on temporary visas to start new lives in anticipation of getting a green card. But most of the investors have already been denied green cards in light of the fraud, and the others are bracing for a similar fate.

“He stole their futures in this country,” Wilkinson said.

In all, Dargey, 43, scammed about 280 investors from China out of $24.2 million while raising about 10 times that amount over three and a half years ending in 2015, prosecutors said.

The Securities and Exchange Commission froze his companies’ assets in August 2015 after an investigation. This past January, he pleaded guilty to two felony counts — conspiracy to commit wire fraud and concealing information from the federal government — and agreed to pay the money back in restitution, in exchange for a prison sentence capped at 10 years.

The U.S. Attorney’s Office had urged U.S. District Court Judge Robert Lasnik to impose the full 10-year sentence, citing the size of the fraud and the toll it took on the lives of his investors.

But Lasnik was clearly moved by dozens of letters of support from Dargey’s allies, who said Dargey was not greedy but merely got in over his head. People in the packed courtroom had come from as far as Tibet to show their support. Dargey had sent money back to Tibet and previously led successful projects renovating rundown buildings in Everett.

His attorney, Bob Mahler, said Dargey had apologized and shown remorse for his crimes. He produced psychologists who said many of Dargey’s actions were the result of his ADHD (Attention-Deficit/Hyperactivity Disorder) and PTSD (Post-Traumatic Stress Disorder), and the fact that he had just a third-grade English reading level.

Mahler said Dargey made efforts after the fraud was uncovered to ensure a new developer could take over his stalled Potala Tower apartment and hotel project in Seattle, which was just a hole in the ground when the SEC intervened. Construction has since resumed under new management, three years after Dargey joined Mayor Ed Murray for a ceremonial groundbreaking. Dargey’s plans for future projects in South Seattle and Shoreline have since been scrapped.

The investors hope to ultimately be made whole, financially, even if their green cards — their primary motivation for the investments — never materialize.

Mahler added that the funds he spent lavishly on cars and dinners were also about attracting new business, saying he had to play the part for foreign investors.

Lasnik said he had never received so many total letters — dozens and dozens from both victims and supporters — in his nearly 30 years on the bench.

The judge noted that most immigrants work hard to ensure future generations can prosper, while Dargey did the opposite with his “reckless behavior.” But he said there was clearly good inside Dargey, calling him of “great moral fiber and character.”

After his sentence was handed down, Dargey stared straight at the ground, expressionless. He later hugged his wife, Tami Agassi — sister of tennis great Andre Agassi — his daughter and other supporters.

The family now lives in Las Vegas. Dargey is expected to report to a satellite prison camp in Lompoc, California.

The federal EB-5 program was established to give foreigners a green card if they invest at least $500,000 in a project in a jobs-starved area. It’s helped fund more than $2 billion in projects in the Puget Sound region, making Seattle one of the hottest places in the country for foreign EB-5 investment.

But the program has long been under fire, since the projects often flow to wealthier areas, and there have been many reports of fraud, locally and around the country. The Wall Street Journal reported earlier this week that Jared Kushner’s company has been subpoenaed over one of its EB-5 projects in New Jersey.

Still, major criminal prosecutions remain rare. The local U.S. Attorney’s Office said it could only find one other person to be sentenced under a similar federal EB-5 criminal fraud, a case from Illinois earlier this year. The SEC has also filed several similar cases in civil actions, including some locally.

Congress continues to weigh whether to extend or end the EB-5 program, with a vote possible as soon as next month.