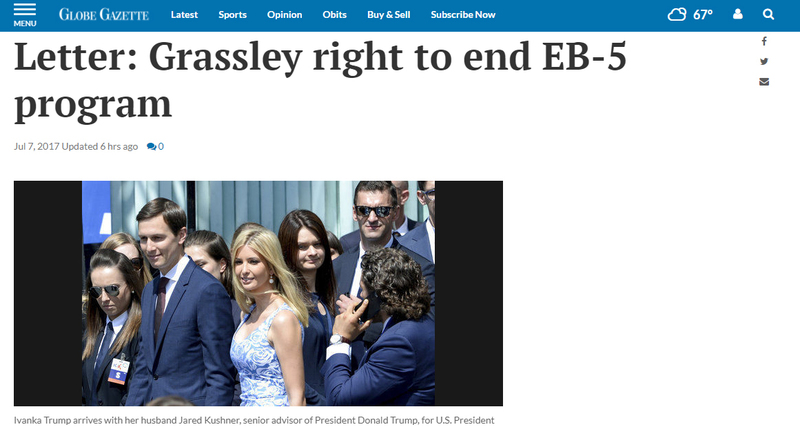 The EB-5 Immigrant Investor Program was created by Congress in 1990 in order to "stimulate the U.S. economy through job creation and capital investment by foreign investors." It gives foreign nationals who invest at least $500,000 in U.S. development projects faster access to green cards for themselves and their families to buy their way into the USA ahead of others.

It is believed the political climate in China and a growing upper middle class has contributed to an increase in applicants, because many have a large amount of money.

President Trump signed into law renewal of a program offering permanent residence in the United States to affluent foreigners investing money in real estate projects here that could benefit the president’s extended family.

Mr. Trump’s son-in-law and top adviser, Jared Kushner urged wealthy Chinese in Beijing to consider investing $500,000 each in a pair of Jersey City luxury apartment towers the family-owned Kushner Companies planned to build. The family ties of Nicole Kushner Meyer of Kushner Companies, and sister of Jared, were touted to the Chinese.

These events demonstrate the peril of the Trump and Kushner families maintaining close ties to their business interests creating the impression they could profit from Donald Trump’s presidency.

Jared Kushner plays a central role on China policy. That role has strengthened the Kushner family name in a nation accounting for over 80 percent of the EB-5 visas issued. In fact, Kushner Companies — when Mr. Kushner was still at the helm — had received $50 million in EB-5 financing for a separate New Jersey Trump-branded luxury high-rise tower in Jersey City that opened late last year.

Sens. Chuck Grassley (R-Iowa) and Dianne Feinstein (D-Calif.) co-signed a bill to end the EB-5 program because it supports luxury projects like the Kushner deal instead of promoting job creation in rural America or distressed urban areas as intended.