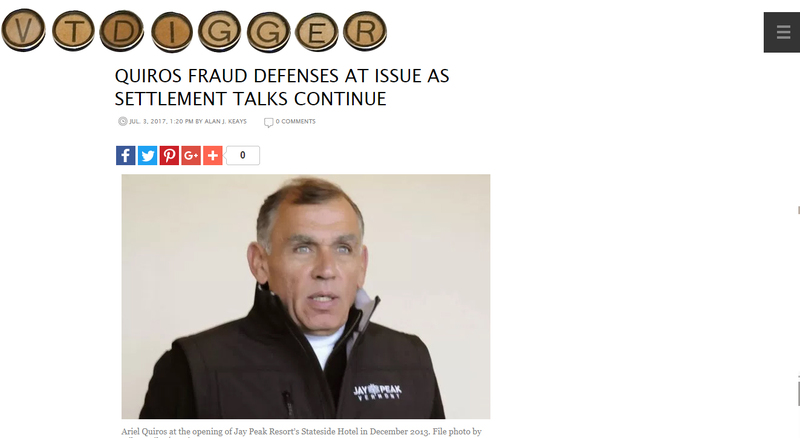 A federal judge is facing dueling filings over what defenses Jay Peak owner Ariel Quiros can raise to investor fraud allegations, though it’s still unclear if the case will even make it to trial.

That’s because his new attorney says the ski mogul is continuing to cooperate with regulators and attorneys for the U.S. Securities and Exchange Commission. But the lawyer declined to comment when asked if a settlement is near.

“Both the SEC and us are going to continue to proceed with the litigation,” said Melissa Visconti, Quiros’ attorney, “but we’re hopeful that we can resolve it before we have to do too much more litigating.”

She did submit a filing on her client’s behalf raising three possible defenses to the investor fraud allegations leveled against him last year in a lawsuit by the SEC.

“It’s really just a procedural thing. We are obligated to file an answer to the complaint,” Visconti said. “This case is not stayed pending our discussions.”

Attorneys for the SEC could not be reached for comment.

The SEC attorneys did file a recent motion arguing that some defenses Quiros is raising to the investor fraud allegations shouldn’t be allowed.

Robert Levenson, an SEC lawyer, seeks in that filing to prevent Quiros from using two out of three defenses that a court filing says he may assert, if the case should proceed to trial.

Quiros had initially raised 34 possible defenses in a filing several months ago and later reduced those to eight. Then, after retaining new legal counsel in March, his team filed a motion cutting that number again, to three.

“But,” Levenson wrote in his recent filing, “even on third try, Quiros’ second and third affirmative defenses still are improper and insufficiently pled, and the Court should strike them.” The SEC attorney does not address another of Quiros’ possible defenses that raises issue with the statute of limitations of allegations against him.

The SEC lawsuit brought in 2016 states that Quiros, along with Bill Stenger, Jay Peak’s former president, ran a “Ponzi-like” scheme to defraud immigrant investors in a series of massive developments at Jay Peak as well as other projects at Burke ski area and in the city of Newport.

Stenger and Quiros, according to filings, misused $200 million out of more than $350 million raised from investors through the federal EB-5 visa program. The suit also accuses Quiros of “looting” more than $50 million to pay personal expenses, from taxes to a luxury New York City hotel.

Levenson is arguing that one of the defenses Quiros is raising is not even a defense at all. That’s because it deals with a matter that would be taken up after a trial, not during.

Attorneys for Quiros, in their filing, state he is entitled to “contribution from others and/or a set-off” against claims in the SEC lawsuit that others, in whole or in part, caused the alleged losses, including “financial services providers, accountants, and professionals,” and those “alleged losses have been repaid in whole or in part by Defendant Quiros and others.”

A court-appointed receiver now overseeing the properties at the heart of the fraud case has recently reached a nearly $150 million settlement with Raymond James & Associates Inc., a financial institution that Quiros had used. That settlement provides money to cover some of the losses by investors, as well as to the complete unfinished projects their money was supposed to pay for.

Quiros, in his filing listing his defenses, does not name Raymond James. Regardless, Levenson wrote, that defense raises questions that aren’t decided at trial, but when determining what penalty should be assessed.

Levenson is also seeking to strike Quiros’ proposed defense involving claims that he relied “in good faith” on information and opinions of professionals, including “attorneys, accountants, and financial services providers.”

The SEC attorney wrote that Quiros does not supply facts in support of that defense.

“It does not identify the specific attorneys, accountants, and financial service providers who purportedly provided Quiros with any advice,” Levenson wrote, later adding, “The defense does not list dates or the circumstances under which any professional provided advice to Quiros, what advice Quiros sought, or what information he disclosed to any professional from whom he sought advice or who provided advice.”

If the two defenses aren’t stricken, Levenson asked the judge to at least require Quiros’ attorney to refile and provide more specific information.

Visconti, Quiros’ attorney, said she worked with SEC attorneys to reduce the number of possible defenses and did cut them down by more than half. However, they couldn’t reach consensus on everything.

“We agreed to most of them, but we didn’t agree to all of them,” she said. “We figured the best thing to do was to let the court decide what’s appropriate.”