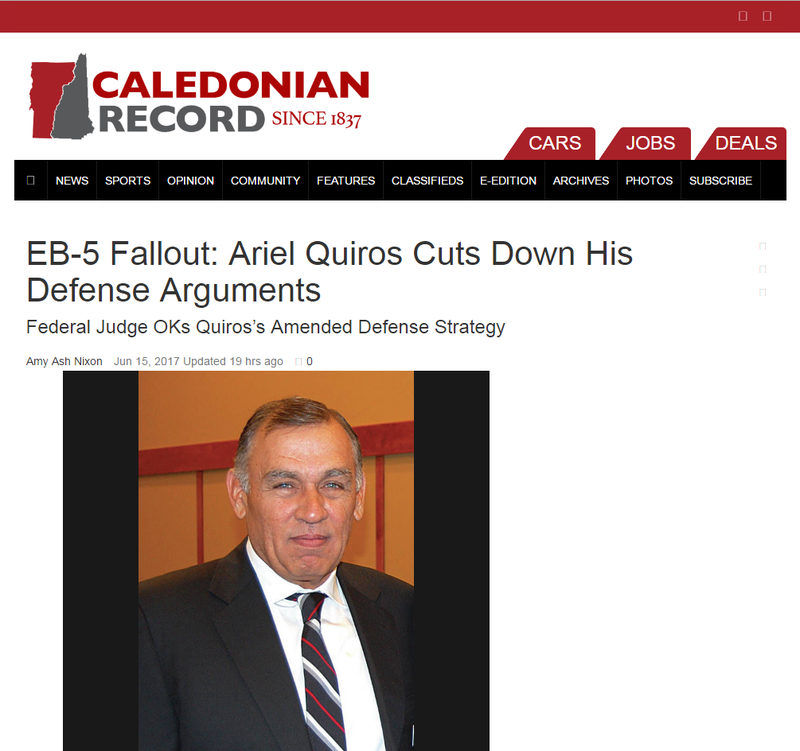 Ariel Quiros, the embattled owner of Burke Mountain and Jay Peak resorts - which have been under federal receivership for more than a year since he was accused of masterminding an alleged Ponzi-like securities fraud scheme - has reduced the number of defenses he plans to mount in his trial from eight to three.

Initially, Quiros had claimed 34 defenses against the charges brought by the Securities and Exchange Commission.

One of the claims Quiros intends to assert is that he is not to blame because he made decisions based on the expertise of professionals including attorneys, accountants and financial service providers. He’s also claiming the statute of limitations has passed for some of his alleged wrongdoing and he can’t be prosecuted.

Quiros is demanding a jury trial for all issues which the court has now said are appropriate to contest, in a motion granted and entered in U.S. District Court in Miami, Florida, over the weekend, court documents posted Monday show.

In April 2016 Quiros was accused by the SEC and the Vermont Attorney General of having orchestrated an eight-year long scheme to defraud hundreds of immigrant investors in the EB-5 program; he and his former business partner, Bill Stenger, were jointly alleged to have misappropriated more than $200 million.

Quiros alone faced the more egregious accusation of having used the investors’ funds as his “personal piggy bank” and stealing outright another $55 million plus.

In a 42-page exhibit attached to the motion boiling his defenses down to the three which have met muster with a federal judge, Quiros denies many of the allegations against him, but admits to ownership in the properties, and having raised funds through investors for the multiple projects he spearheaded.

Repeatedly in the exhibit, Quiros says he “… lacks knowledge or information sufficient to form a belief about the truth of the allegations,” related to various aspects of the federal case against him. In dozens of instances, Quiros denies the allegations outright.

The federal receiver in the case, Michael Goldberg, recently announced in a press conference at the Vermont Statehouse that he and his attorneys had secured a settlement of $150 million with Raymond James, a financial services company Quiros had worked with in his E-5 empire.

The company did not admit to any wrongdoing, and once the judge okays the settlement, many investors will be made whole, as well as contractors and vendors associated with the Northeast Kingdom developments.

Quiros, a Miami businessman whose assets have been frozen as the government prepares for his trial in the fall of 2018, has maintained the funds he took were his profits, outlined in investor documents, which he claims he never misrepresented.

In another motion filed in recent days, Quiros was granted a motion to have more time to file his objection to the Raymond James settlement and to reserve the right to appear at the hearing on the settlement.

The deadline had been June 5, and Quiros was given until Monday to file objection and reserve his right to be at the upcoming settlement hearing.

Quiros is not party to the settlement, but is affected directly by the terms of the agreement.