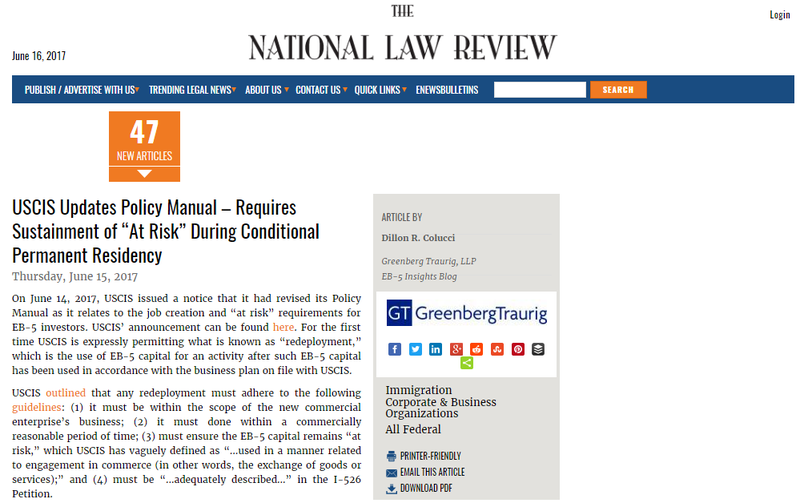 On June 14, 2017, USCIS issued a notice that it had revised its Policy Manual as it relates to the job creation and “at risk” requirements for EB-5 investors. USCIS’ announcement can be found here. For the first time USCIS is expressly permitting what is known as “redeployment,” which is the use of EB-5 capital for an activity after such EB-5 capital has been used in accordance with the business plan on file with USCIS.

USCIS outlined that any redeployment must adhere to the following guidelines: (1) it must be within the scope of the new commercial enterprise’s business; (2) it must done within a commercially reasonable period of time; (3) must ensure the EB-5 capital remains “at risk,” which USCIS has vaguely defined as “…used in a manner related to engagement in commerce (in other words, the exchange of goods or services);” and (4) must be “…adequately described…” in the I-526 Petition.

These guidelines make it quite clear that in order to comply with the “at risk” requirement in a redeployment scenario, the EB-5 capital must be deployed into an actual commercial activity which involves the exchange of goods and services. This would appear to rule out the redeployment of EB-5 capital into financial products such as treasury bills, stocks, mutual funds, or money market investments. These requirements also appear to constrain redeployment to commercial activity which is “…within the scope of the new commercial enterprise in existence at the time…” of filing the I-526 Petition. Thus, for those EB-5 investors who have already filed, any redeployment will likely have to be something similar to the original use of the EB-5 capital.

This new policy by USCIS is significant because it realistically mandates redeployment for a new commercial enterprise which has an EB-5 investor born in mainland China. For reference, EB-5 investors born in mainland China are subject to what is known as retrogression, whereby they must wait a certain period of time to obtain an immigrant visa after receiving approval of their I-526 Petition. The projected wait time is currently estimated at 5-6 years for individuals who are filing I-526 Petitions today. Accordingly, an EB-5 investor born in mainland China will not become a conditional permanent resident for approximately 6 years, at which point they will be a conditional permanent resident for 2 more years. Thus, the effect of USCIS new policy is that EB-5 capital must be invested in a commercial activity for approximately 8 years, with only commercially reasonable interruptions during those years.