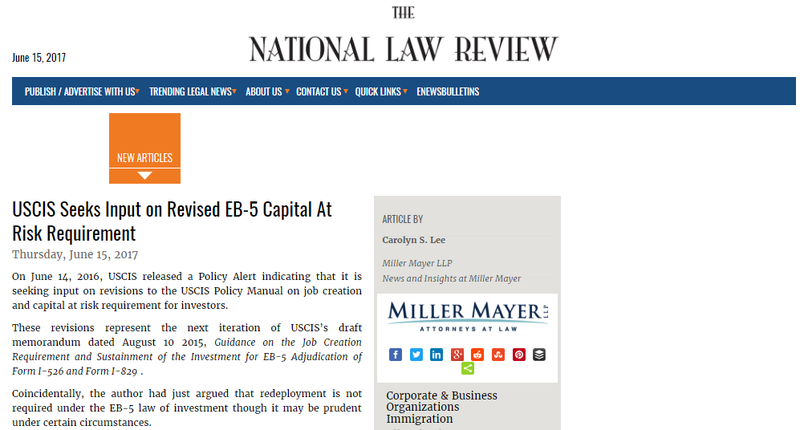 On June 14, 2016, USCIS released a Policy Alert indicating that it is seeking input on revisions to the USCIS Policy Manual on job creation and capital at risk requirement for investors.

These revisions represent the next iteration of USCIS’s draft memorandum dated August 10 2015, Guidance on the Job Creation Requirement and Sustainment of the Investment for EB-5 Adjudication of Form I-526 and Form I-829 .

Coincidentally, the author had just argued that redeployment is not required under the EB-5 law of investment though it may be prudent under certain circumstances.

The revised USCIS Policy Manual appears to agree with this analysis in some respects and depart from it in others. The published highlights of the revised policy are:

Although the published Policy Alert indicates that the guidance in the revised Policy Manual is “effective upon publication,” the open comment period ending June 28, 2017 indicates that further revisions may be forthcoming.

Comments should address whether the revisions reflect sound interpretation of existing statute, regulations, and precedent decisions regarding EB-5 investment.  Comments should also address whether the cited decision Matter of Ho which deals with pre-job creation facts for I-526 eligibility is appropriate basis for a new requirement of business activity that “must actually be undertaken” after the job creation requirement has been satisfied.

If USCIS desires to see the new commercial enterprise continue to be engaged in some commercial activity after repayment of EB-5 proceeds, such a policy may be more appropriately keyed instead to the definition of “commercial enterprise.” EB-5 regulations define “commercial enterprise” as “any for-profit activity formed for the ongoing conduct of lawful business”. Stakeholders may continue to debate the pros and cons of USCIS policy, but the legal basis for requiring continued business activity would be sounder on that basis than stretching the “at risk” test beyond its bounds.