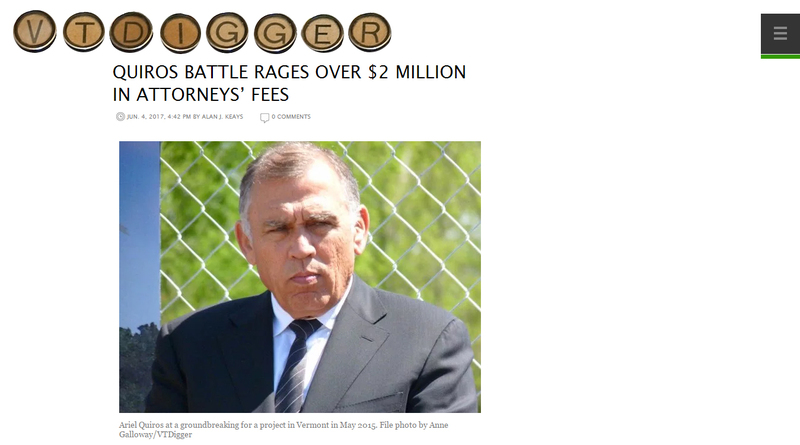 Ariel Quiros at a groundbreaking for a project in Vermont in May 2015.

The owner of Jay Peak ski resort facing investor fraud allegations is engaged in an increasingly bitter dispute with his former attorneys over more than $2 million in legal bills he racked up before firing them earlier this year.

Quiros’ former attorneys from the Florida-based firm of León Cosgrove dispute that contention. They argue they are only trying to defend themselves against accusations from their onetime client, who is facing several legal actions, including one by the U.S. Securities and Exchange Commission.

“The León Cosgrove firm continues to pursue its own interests without regard to the interests of their former client and, as well, continues to cause Mr. Quiros’ current counsel, counsel for the Receiver and for the SEC, and the Court to waste time and resources dealing with frivolous and improper litigation tactics,” Melissa Visconti, a Florida attorney now representing Quiros, wrote in a recent motion.

Attorney Derek León, on behalf of the León Cosgrove firm, submitted a response, disputing the actions as “frivolous.”

“Quiros seemingly believes that — despite his written assurances to the contrary — he has the right to refuse to pay his former counsel without explanation,” the attorney wrote.

Magistrate Judge Edwin G. Torres at a hearing Thursday agreed to grant a protective order Quiros’ attorney requested. The order allows Quiros to not respond to discovery requests from his former attorneys in a case where they are not a party. However, the magistrate judge denied a request to impose any sanctions against Quiros’ previous legal team for making earlier discovery requests.

The case is being heard in federal court in Miami. Quiros lives in Miami and has many businesses with addresses in that city.

Visconti, reached Friday, said that while she understood her client’s former attorneys want to get paid for their work, they are not following the proper avenue by trying to intervene in cases in which they are not a party.

“It’s going about it the wrong way,” she said. “This is a distraction for his lawyers when we’d rather be focusing on the real issues in the SEC case.”

The dispute is playing out as a side issue in a lawsuit brought by Quiros against his former insurer, Minnesota-based Ironshore Indemnity. He is seeking coverage for his legal costs in defending himself against the investor fraud allegations leveled against him in various lawsuits, including the one by the SEC.

His former attorneys say they are entitled to money from the insurer to help pay the more than $2 million they say Quiros owes them for representing him since the spring of 2016, when the state of Vermont and the SEC filed separate investor fraud lawsuits against him.

Quiros fired his former attorneys in March. In a court filing, the reasons cited included “excessive bills and failing to follow the instructions of the client or to keep the client apprised of developments in litigation in which Mr. Quiros was a part.”

Visconti, in a recent filing, wrote that Quiros’ former attorneys are no longer a party to the pending lawsuit over the insurance coverage and shouldn’t be allowed to intervene.

In addition to the insurance coverage case, Quiros’ former attorneys have sought to intervene in the pending lawsuit brought by the SEC against him as they make their claims for attorneys fees.

Judge Darrin P. Gayles, presiding in the SEC case, denied that request as well as a following motion to reconsider that decision. Quiros’ former attorneys have since filed a notice appealing that issue to the 11th U.S. Circuit Court of Appeals in Atlanta.

“The León Cosgrove firm’s tactics fly in the face of Judge Gayles’ Order and are impeding Mr. Quiros’ ability to freely negotiate with the SEC, the Receiver, and (Ironshore) in this action,” Visconti, Quiros’ current attorney, wrote in her filing.

“Notably, in the Motion for Reconsideration, León Cosgrove revealed an attorney-client communication from Mr. Quiros, although the privilege has not been waived by Mr. Quiros,” she continued.

León, in his motion, said that accusation was false, laying out his argument in footnotes to the main filing.

“To respond to Quiros’s allegations about (León Cosgrove) performance as his counsel, (León Cosgrove) included a March 9, 2017 thank-you note from Quiros — written days prior to the termination — in which he praised his former counsel,” León wrote. “Unfortunately, Quiros’s current counsel now alleges that this thank-you note revealed an attorney-client communication from Mr. Quiros, although the privilege has not been waived by Mr. Quiros.”

León added, “Second, and more importantly, a client is not free to level accusations against his former counsel, and then invoke the attorney-client privilege to prevent the attorney from defending himself. When a client makes an allegation against a lawyer, the lawyer may reveal confidential communications to respond to the accusation.”

Quiros, a Miami businessman who owned Jay Peak, and Bill Stenger, Jay Peak’s former president, are accused of misusing $200 million of the $350 million they raised in an eight-year span from immigrant investors under the federal EB-5 visa program. The money was meant to pay for improvements at the northern Vermont ski area and other projects in Newport and Burke.

Quiros is also accused of looting $50 million of that money to pay for personal expenses, including a condo in New York City worth more than $2 million, and to pay his personal taxes.

The change in attorneys for Quiros also brought about a change in strategy. His previous legal team filed a slew of motions in his defense, challenging the accusations against him. His new legal team has a new mantra: Cooperate.

The change in tactics, Visconti has said, will hopefully lead to a “global resolution” of the cases against Quiros.