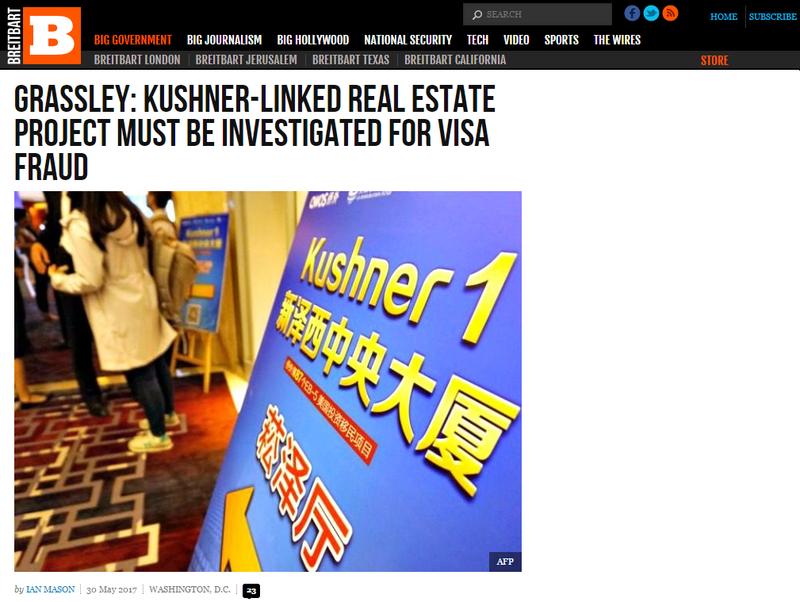 The request comes after revelations that Nicole Kushner Meyer, sister of White House Senior Advisor Jared Kushner, gave an investment pitch at the Beijing Ritz Carlton for the nearly $1 billion “1 Journal Square” real estate development in New Jersey, a project of the Kushner Companies of which Jared was CEO until he joined the administration.

Ms. Meyer urged the Chinese businessmen to “invest early” in order to get in line now for “golden visas” to the United States, a reference to the much-maligned EB-5 visa program. The apparent implication was that investors should rush to invest $500,000 in the project, and therefore qualify for a program, before EB-5 reform strengthen requirements.

More troublingly, the presentation touted the Kushner Companies’ continuing relationship with Jared Kushner and the Trump administration. Allegedly, Meyer showed photographs of Jared Kushner and President Donald Trump on a large projection screen, telling the Chinese that “In 2008, my brother Jared Kushner joined the family company as CEO, and recently moved to Washington to join the administration,” and that 1 Journal Square, “means a lot to me and my entire family.”

Grassley, a long-time critic of the EB-5 program, immediately expressed his concern about the presentation, asking DHS to categorically rule out any special treatment for Kushner Companies investors. On Wednesday, he followed up by demanding an investigation. In a press release announcing the dispatch of the letter, Grassley’s office said:

The letter itself cites a Reuters report as finding six instances in which the Kushner Companies’ Chinese partner offered assurances of EB-5 visas and quotes a Chinese investor as saying, “They said the president would make sure it came through.”

The letter goes on to say:

In response, Grassley is asking to be fully apprised as to the SEC and DHS opinions as to whether a violation of law has occurred.

This request represents the latest action in Senator Grassley’s ongoing scrutiny of the EB-5 visa program, which is designed to provide residency rights to foreign investors who contribute a half million dollars or more to projects likely to create jobs for Americans. The program has been noted for scandals and problems almost since its inception in 1990.

For example, the now infamous investment project in Vermont’s Jay Peak ski resort, led to a developer, Ariel Quiros, having his assets frozen last year for allegedly holding EB-5 visas out to foreigners and then misusing the money he raised, including $50 million for his own personal expenses. Earlier this year,  a large-scale fraud in New York came to light, apparently using EB-5 visas as a tactic to entice mostly Chinese investors.

Most recently, raids were conducted in California in relation to a different alleged $50 million investment fraud, again involving promises of EB-5 visas for Chinese investors. In that case, visas were allegedly extended to several of the most-wanted criminal fugitives in China. According to the China Daily, three of the 100 most-wanted public corruption and bribery fugitives, including one facing a potential death penalty, invested in the Los Angeles-area-based real estate scheme.

That bill, which Sen. Dick Durbin (D-IL) joined as a third co-sponsor in March, is pending before the Senate Judiciary Committee.