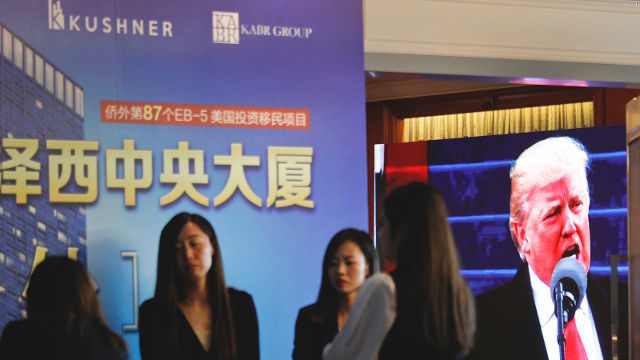 Republican senator Chuck Grassley of Iowa has demanded that an investigation be carried out into the Chinese company Qiaowai, which has been working on behalf of Kushner Companies to entice wealthy Chinese to invest in the well-connected real estate company's latest project with promises of US visas.

In January, Jared Kushner, Ivanka Trump's husband, sold his shares of Kushner Co. to take on a new -- and controversial -- position as senior White House advisor to his father-in-law, though that has done little to prevent the family company from getting wrapped up in charges of government corruption and profiteering. 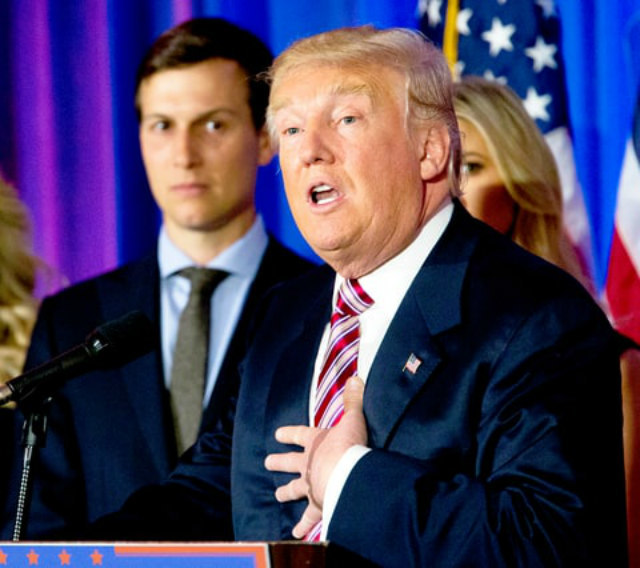 Earlier this month, Jared's sister Nicole Kushner Meyer got in trouble during a fundraising tour in China by mentioning her brother while pitching wealthy Chinese on investing in the company's One Journal Square project. Meyer later apologized, stressing that Jared no longer plays any part in the family company, canceling her appearances at the rest of the company's planned presentations in China -- though the show went on without her with the help of Qiaowai.

Kushner Companies is aiming to build two apartment complexes in Jersey City, New Jersey with some serious financial help from rich Chinese investors through the EB-5 visa program, a program that has become more and more controversial in recent years because of its loose guidelines for immigration and business. 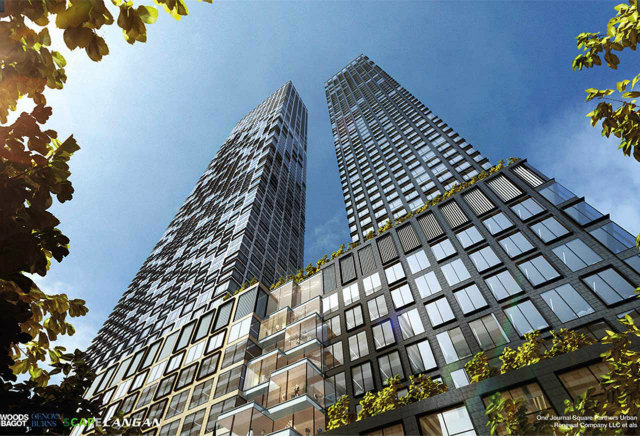 One Journal Square is planned to consist of two towers, one of which will be 79 stories high, and 744 rental units.

According to The New York Times, the EB-5 program offers investors a green card visa if they invest $500,000 in an US business, however this offer remains conditional and participants' visas will not necessarily be approved.

But, that wasn't what Qiaowai announced to potential investors in January. According to Reuters, the company's website contained at least six promises that investing in One Journal Square would guarantee a visa for all participants.

Reuters also points to a company WeChat post from May 5th that reads: "[The project] in a real sense guarantees a permanent green card and the safety of the investment principal, and we consider it one of the best of Qiaowai's 87 projects to date!"

In case that's not enough to attract investors, Qiaowai's website also notes that company president and founder Ding Ying had met with Donald Trump shortly after his inauguration, and that their good relationship would make it easier for investors to acquire a visa.

"The fact that Ms. Ding has once again been invited to attend a presidential inauguration shows that the US Congress values and approves of the Qiaowai group," the site said.

However, Reuters contacted a spokesman for Vice President Mike Pence, who said that he had no recollection of a meeting between Ding and Trump ever taking place (of course, Pence's memory can be a bit foggy at times). 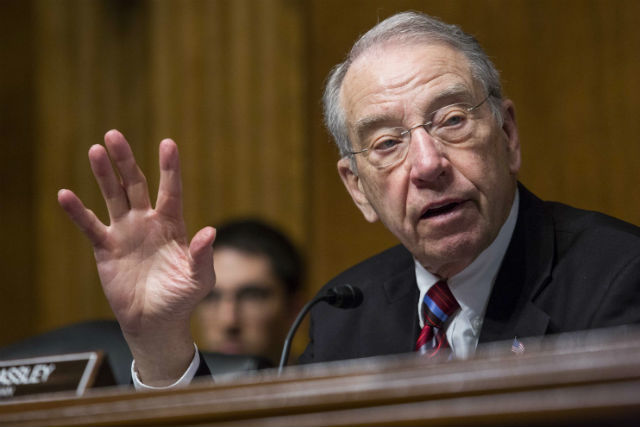 On May 24th, Grassley, the chair of the Senate Judiciary Committee, wrote a letter to the Department of Homeland Security detailing his concerns about how Qiaowai was abusing the EB-5 program, making “potentially fraudulent statements and misrepresentations."

"Given all of these concerns, a closer look at Qiaowai Group and the U.S. Immigration Fund are clearly warranted, as reports suggest both companies have long employed questionable practices,” he wrote, according to The Hill.

Meanwhile, Kushner Companies continues to deny any involvement in the false statements.

"No one at Kushner Companies was aware of any statement or guarantee," company spokeswoman Risa Heller said according to The New York Times. "They did not and would not authorize that kind of language." 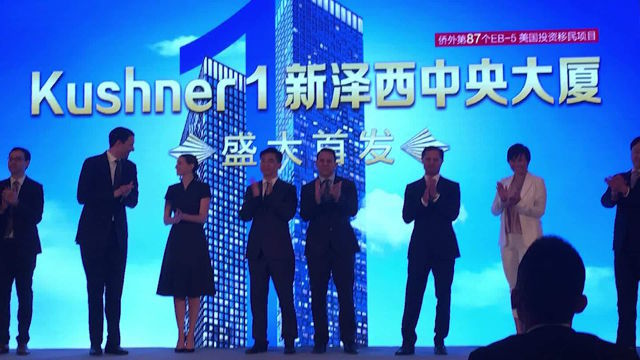 Grassley's proposed investigation would not only target companies using the EB-5 program, but the nature of the program itself. The NYT notes that EB-5 began in 1990 with the intention of giving poor neighborhoods a financial boost, but quickly turned into a cheap way for the wealthy to obtain overseas investments. Its reputation for corruption has made it a prime target for criticism.

Following reports about the Kushner Companies' fundraising efforts in China, many have spoken out against Jared Kushner's government role and how it could lead to corruption. Meanwhile, others are at least happy that the whole scandal has brought the EB-5 program to the public's attention: 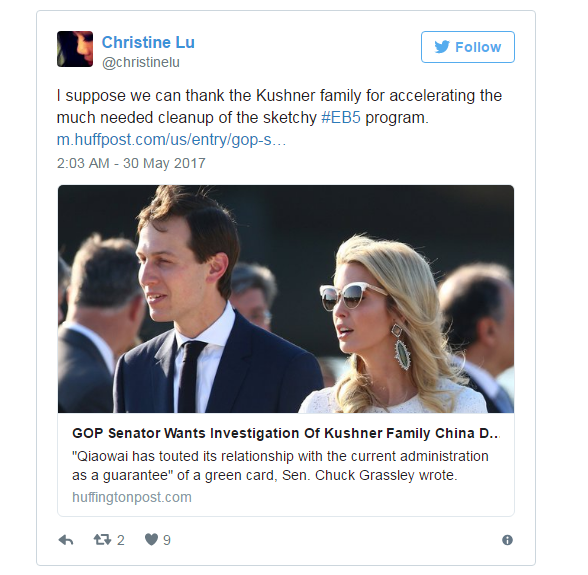 The New York Times reports that Trump himself was even miffed at Kushner for how his family's company had apparently used his image and office to attract investors, making snide remarks directed at Kushner during West Wing meetings. 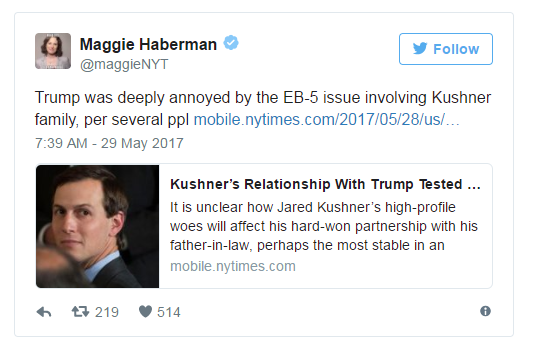 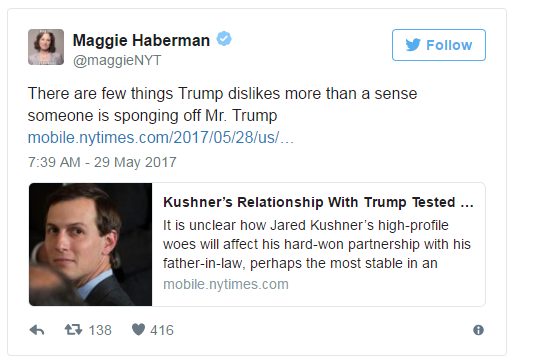