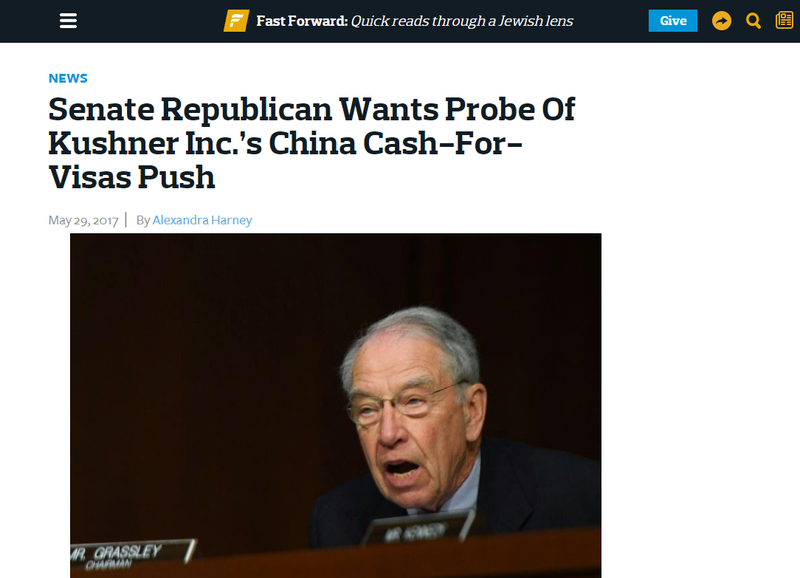 The chairman of the Senate Judiciary Committee has called for an investigation into “potentially fraudulent statements and misrepresentations” made by companies promoting investment in a property development involving the family company of White House advisor Jared Kushner.

Chuck Grassley, a Republican senator from Iowa, requested a review of claims made by Chinese migration agency Qiaowai and the U.S. Immigration Fund (USIF) in the marketing of the One Journal Square project in Jersey City, New Jersey to potential investors in China.

Grassley flagged his concerns to the Department of Homeland Security and the Securities and Exchange Commission in a May 24 letter that was later posted on his website.

Jupiter, Florida-based USIF contracted with Beijing-based Qiaowai to market projects including One Journal Square to potential investors through the controversial EB-5 scheme. The program offers qualified foreign investors the chance at a green card in exchange for a $500,000 investment in a U.S. business.

Kushner Companies is also working with KABR Group, a private equity fund, on the One Journal Square project, according to marketing materials on Qiaowai’s website. The developers are seeking to raise $150 million, or 15.4 percent of the funding, from EB-5 investors.—Reuters