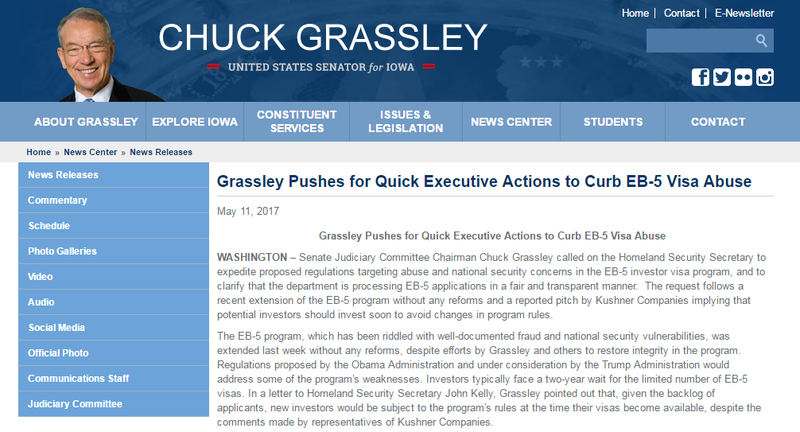 Senate Judiciary Committee Chairman Chuck Grassley called on the Homeland Security Secretary to expedite proposed regulations targeting abuse and national security concerns in the EB-5 investor visa program, and to clarify that the department is processing EB-5 applications in a fair and transparent manner.  The request follows a recent extension of the EB-5 program without any reforms and a reported pitch by Kushner Companies implying that potential investors should invest soon to avoid changes in program rules.

The EB-5 program, which has been riddled with well-documented fraud and national security vulnerabilities, was extended last week without any reforms, despite efforts by Grassley and others to restore integrity in the program. Regulations proposed by the Obama Administration and under consideration by the Trump Administration would address some of the program’s weaknesses. Investors typically face a two-year wait for the limited number of EB-5 visas. In a letter to Homeland Security Secretary John Kelly, Grassley pointed out that, given the backlog of applicants, new investors would be subject to the program’s rules at the time their visas become available, despite the comments made by representatives of Kushner Companies.

“As you know, EB-5 applicants ordinarily wait at least two years for a petition to be processed and for visas to become available.  Ms. Meyer’s statements, however, could seem to imply that foreign nationals who invest with the Kushner Company will receive special treatment and expedited approval.  It is appropriate for the Department to clarify and affirm that no foreign investors will receive preferential treatment, that applications will be processed in the order in which they are received—subject to any existing backlog—and that future applications will be subject to the proposed regulations, when approved,” Grassley said in the letter.

In the letter, Grassley called on the Trump Administration to continue moving forward with the regulations in an open and transparent manner.