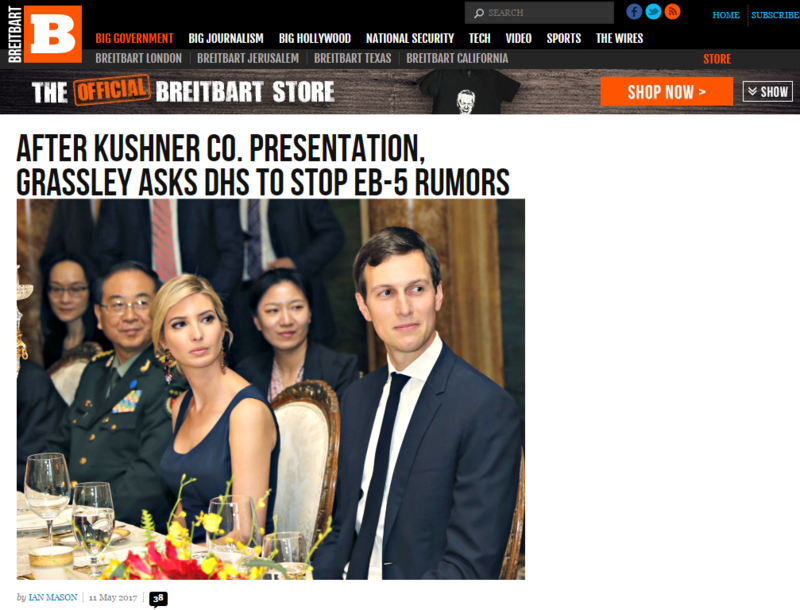 Sen. Chuck Grassley (R-IA) penned a letter to Secretary of Homeland Security John Kelly Wednesday, urging his department to get ahead of rumors circulating in China over EB-5 investor visas.

The long-troubled EB-5 program allows foreign businessmen who invest $500,000 or more in an American business venture to receive green cards for themselves and their families. The program was catapulted into the headlines this week when it became clear Nicole Kushner Meyer, sister of White House Senior Adviser Jared Kushner, had included a pitch to “invest early” in a Kushner Company real estate project in New Jersey, suggesting the Chinese should get in line for these “golden visas” before potential reforms crack down on their issuance.

The EB-5 program was begun in 1990 and has recently been the subject of numerous scandals and frauds, some seeing it as little more than way for rich foreigners to buy U.S. permanent legal residence and a path to citizenship.

Ariel Quiros, the man behind the now infamous investment project in Vermont’s Jay Peak ski resort, had his assets frozen last year when it became clear he was effectively using the project to solicit investments from foreigners hoping for EB-5 green cards and then misusing the money, allegedly including $50 million for personal expenses.

In January, a massive real estate investment fraud was unearthed in New York enticing foreigners, mostly Chinese, to invest in the hopes of securing EB-5 visas.

Last month, raids were conducted in California in relation to another alleged $50 million investment fraud that attempted to get EB-5 visas for Chinese, including several of the most-wanted criminal fugitives in China. According to the China Daily, three of the 100 most-wanted public corruption and bribery fugitives, including one facing a potential death penalty, invested in the Los Angeles-area-based real estate scheme.

The entire program was set to expire at the end of last month, but the funding resolution passed by the Republican controlled House of Representatives renewed it without change. One GOP Senator, John Cornyn (R-TX), is reported to be floating legislation to expand the program.

Nicole Kushner Meyer’s presentation to investors Saturday at the Beijing Ritz Carlton raised eyebrows across media and political circles when it was revealed she had emphasized to Chinese investors the possibility of securing EB-5 visas as a perk of investing in her company’s nearly $1 billion “1 Journal Square” real estate project in New Jersey.

Until recently, Jared Kushner was CEO of the Kushner Company and Meyer touted this family connection. Showing photographs of both Jared Kushner and President Donald Trump she told the Chinese businessmen, “In 2008, my brother Jared Kushner joined the family company as CEO, and recently moved to Washington to join the administration,” and that the project, “means a lot to me and my entire family.”

The potential implication of Kushner family influence assisting these Chinese in receiving EB-5 visas was strong enough to compel Sen. Grassley to write to Secretary Kelly.

Wednesday’s letter from Grassley, Chairman of the Senate Judiciary Committee, urges DHS to make clear to the Chinese that no preferential treatment will be given to investors in the Kushner Company’s projects and that they will be placed in the same backlog of EB-5 applicants as everyone else, currently estimated at around two years.

The letter also reiterates Grassley’s determination that the entire EB-5 program be reformed. He and ranking Judiciary Committee Democrat Diane Feinstein (D-CA) introduced legislation to completely eliminate the program in February. In her statement accompanying the introduction, Feinstein said, “The EB-5 program is inherently flawed. It says that U.S. citizenship is for sale. It is wrong to have a special pathway to citizenship for the wealthy while millions wait in line for visas. I agree that the time has come to end EB-5 … The Securities and Exchange Commission has filed charges in case after case of fraud connected to this troubled program. I look forward to working with Chairman Grassley to advance our legislation.”