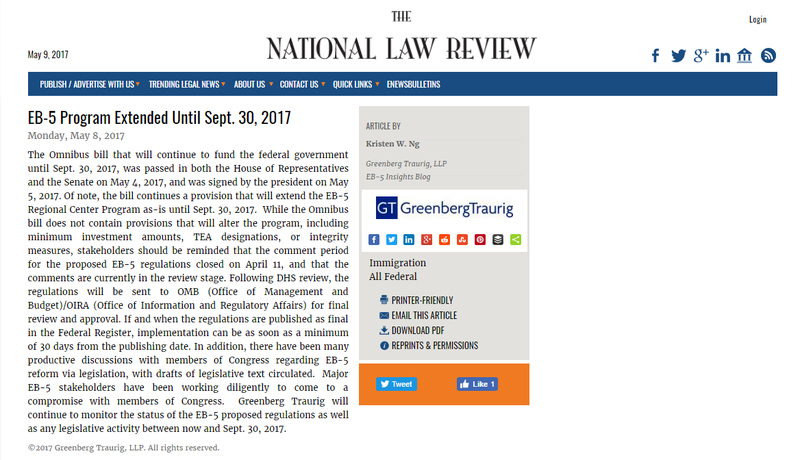 The Omnibus bill that will continue to fund the federal government until Sept. 30, 2017, was passed in both the House of Representatives and the Senate on May 4, 2017, and was signed by the president on May 5, 2017. Of note, the bill continues a provision that will extend the EB-5 Regional Center Program as-is until Sept. 30, 2017. While the Omnibus bill does not contain provisions that will alter the program, including minimum investment amounts, TEA designations, or integrity measures, stakeholders should be reminded that the comment period for the proposed EB-5 regulations closed on April 11, and that the comments are currently in the review stage. Following DHS review, the regulations will be sent to OMB (Office of Management and Budget)/OIRA (Office of Information and Regulatory Affairs) for final review and approval. If and when the regulations are published as final in the Federal Register, implementation can be as soon as a minimum of 30 days from the publishing date. In addition, there have been many productive discussions with members of Congress regarding EB-5 reform via legislation, with drafts of legislative text circulated. Major EB-5 stakeholders have been working diligently to come to a compromise with members of Congress. Greenberg Traurig will continue to monitor the status of the EB-5 proposed regulations as well as any legislative activity between now and Sept. 30, 2017.