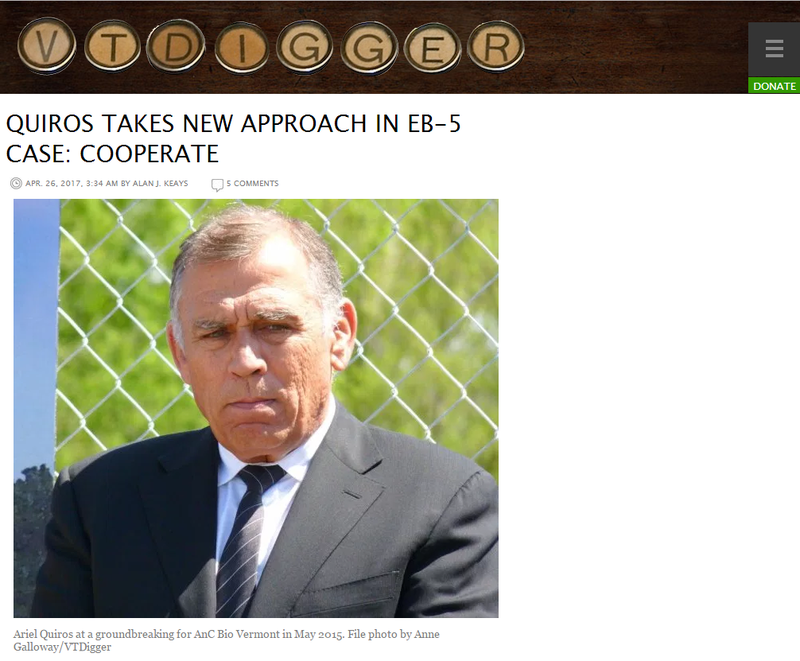 A new lawyer for Ariel Quiros, the Jay Peak owner who is accused of 52 counts of federal securities fraud, says her client is taking a different tack.

Melissa Visconti, a Miami attorney representing Quiros, said Tuesday that instead of continuing the fight the charges that were brought against him more than a year ago, he is now working with authorities.

Quiros fired his previous legal team last month after racking up more than $2 million in legal fees. The lawyers claim they have not yet been paid.

Some of those attorneys represented Quiros even before the U.S. Securities and Exchange Commission and state regulators brought civil investor fraud lawsuits against him in April 2016. Quiros is accused of defrauding hundreds of millions of dollars from EB-5 investors in developments at the Jay Peak ski area and other projects in the Northeast Kingdom.

Visconti said her client’s past team had a “contentious” approach, which she said has “not served Mr. Quiros well so far.”

The attorney described her client as “very distressed.”

“He’s not doing much because all of his businesses and assets are frozen,” Visconti said.

The change in strategy, she said, will hopefully lead to a “global resolution” of the the cases against Quiros.

The firm where she works, Miami-based Damian & Valori LLP, specializes in cases involving the SEC and receiverships, she said.

Federal court in Miami is also where many of the investor lawsuits against Quiros are pending.

Quiros lives in Miami and several of his businesses are based in the city.

Visconti comes to the case with experience in the criminal justice system, serving 11 years as a federal prosecutor.

She said Quiros will also “very willingly cooperate with federal prosecutors” in the ongoing criminal probe of the fraud.

She declined to discuss any possible talks or settlements in cases against her client, adding that she only took on the lawsuit about a month ago and was still getting up to speed on the many facets of the case.

To help get acquainted with the entities involved in the case, she said she recently traveled to Vermont to get a look at the some of the developments leading to the investor fraud allegations against Quiros. She made stops in Jay Peak and Burke Mountain before flying back Tuesday to Miami.

“I know I haven’t commented before,” she said Tuesday. “We are just started to expand our comments a little bit.”

Federal and state lawsuits say Quiros, along with Bill Stenger, Jay Peak’s former president, ran a “Ponzi-like” scheme to defraud EB-5 immigrant investors in a series of massive developments at Jay Peak as well as other projects in Burke and Newport.

In the EB-5 program, foreign investors put up $500,000, plus a $50,000 administrative fee, into qualified projects. If that investment leads to the creation of 10 American jobs, the investor becomes eligible for permanent U.S. residency.

Stenger and Quiros, according to filings, misused $200 million of those investors funds, with Quiros allegedly “looting” more than $50 million to pay personal expenses, from taxes to a luxury New York City hotel.

In a recent filing, Visconti raised several possible defenses her client could raise against the fraud allegations.

According to federal rules, the attorney said, she is required to file an answer to the lawsuit, as well as list available defense. It shouldn’t signal, she said, that her client is not willing to cooperate in the case.

In that case, the court-appointed receiver, Michael Goldberg, announced a $150 million settlement with Raymond James, a financial firm that had been used by Quiros to perpetrate the Ponzi scheme.

Goldberg, as the receiver, oversees the properties and other assets at the center of the fraud cases against Quiros and Stenger.

Visconti confirmed Tuesday that Quiros “really does want to work with everyone to make sure his story is being told.”