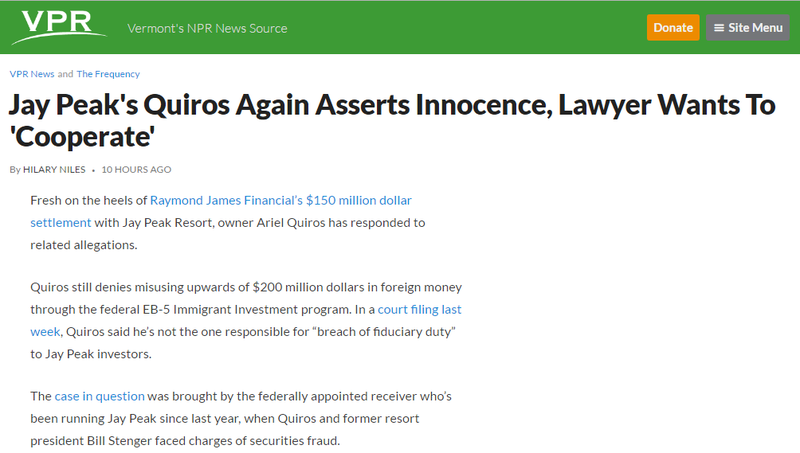 Quiros still denies misusing upwards of $200 million dollars in foreign money through the federal EB-5 Immigrant Investment program. In a court filing last week, Quiros said he’s not the one responsible for “breach of fiduciary duty” to Jay Peak investors.

The case in question was brought by the federally appointed receiver who’s been running Jay Peak since last year, when Quiros and former resort president Bill Stenger faced charges of securities fraud.

But, it was Quiros’s new lawyer who filed the response. And Melissa Visconti says she’s setting a new tone in Quiros’s defense.

Visconti says Quiros’s prior counsel took a contentious approach that didn’t serve Quiros well. Case in point: Raymond James and Bill Stenger each have reached settlements in cases against them.

"Our sense is that everybody sort of dropped out, and Mr. Quiros was there holding the bag, so to speak," Visconti says. "So we’re trying to make sure that he has an opportunity to give his side of the story."

In addition to denying the charges, her filing asserts that the receiver’s lawsuit is invalid, in part, because Stenger is not also named as a defendant.