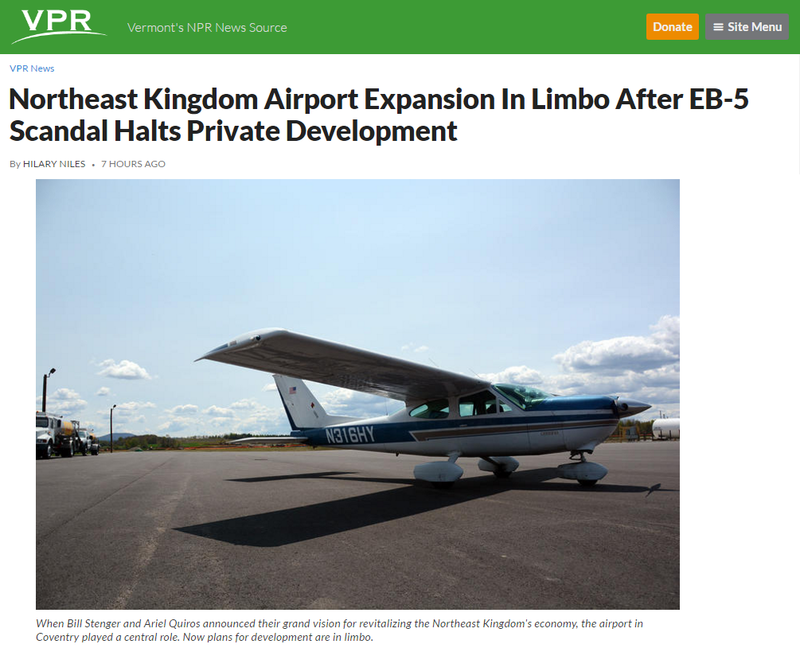 Ray Pronto’s story starts simple enough. He left his hometown of Newport and landed in Pennsylvania, in the Pittsburgh area, where he founded a business in title insurance and loan closings. The company grew — a lot.

“And then I sold that for quite a bit more money than I thought I’d ever see in my life," Pronto says. "And just for basically shits and giggles, I got into the country music business. And the first artist that me and my partner signed was Taylor Swift. And things went pretty well on that. And I just sold my interest to him a couple years ago. So I’ve had a couple businesses that did very very well."

Now, when Pronto comes back to Newport to visit family who still live in the area, he charters a private jet.

Lately, Pronto’s in good company at Newport’s tiny, state-owned airport — which is actually in the neighboring town of Coventry.

In the wake of last year's fraud charges involving foreign investments in Jay Peak, Vermonters have heard a lot about that resort, and about Burke Mountain and downtown Newport.

But Jay Peak owner Ariel Quiros and president Bill Stenger had still other plans for the Northeast Kingdom — plans that prompted a $27 million investment in the Newport airport's runway. 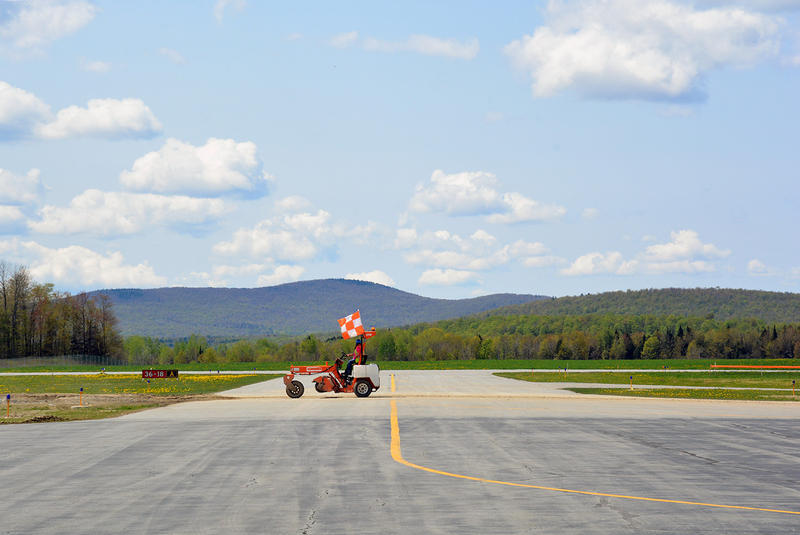 A construction vehicle motors across the runway at the Coventry airport in May, 2016. Since the runway has been extended to 5,000 feet, Newport can now handle private jets. But other development has ground to a halt.

Gauvin says since the runway was extended to 5,000 feet, Newport can now handle private jets — not just the small propeller planes whose traffic has long kept the airport limping along.

"It was just two guys came in, a crew of four people, eight seats," he says. "They had a full queen sized bedroom in the back, and a full bathroom. Yeah. Nice." Gauvin laughs. "It was a treat to go into that one, that was pretty sweet. And that’s a $52 million bird ... Yep. We have no idea, do we?” He laughs again.

Gauvin’s not talking about Ray Pronto — it was someone he had never met before, whose "$52 million bird" left an impression.

And that’s kind of the point. The longer runway accommodates bigger planes. It also makes takeoffs and landings easier for smaller planes in all sorts of weather. Seeing new faces and new planes tells Gauvin the multi-million dollar runway improvements, funded mostly with federal grants, are paying off. Gauvin says a lot of air traffic comes from tourists visiting Jay Peak and other area attractions.

"I am strongly supportive and will ensure that that development continues.” — Guy Rouelle, Vermont Agency of Transportation head of aviation

But the business it generates is a far cry from what was envisioned in the airport’s Master Plan, which was formulated mainly around aviation developments promised by Jay Peak owner Ariel Quiros and president Bill Stenger. When the men announced their grand vision for revitalizing the Northeast Kingdom’s economy, the airport played a central role.

“Yeah, in 2012 Jay Peak came in the picture," Gauvin recalls. "They had plans, big picture plans, everybody knew that.”

Those plans included a new terminal building to house a customs outpost, an airplane manufacturing facility, a bonded warehouse for import/export businesses, a new hangar and maintenance facility and more.

The “new and improved” airport would be necessary to service all the businesses Quiros and Stenger promised to bring to Newport: a Korean biomedical plant, a waterfront conference center and marina on Lake Memphremagog, a mixed-use “Renaissance Block” downtown. 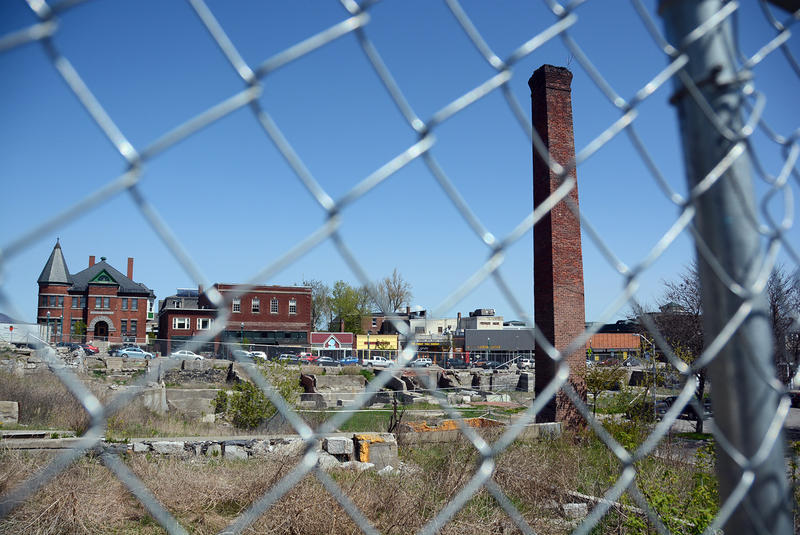 A razed block in downtown Newport, shown here in May of 2016, was the planned home of a mixed-use Renaissance Block that failed to materialize.

Trish Sears worked for years to promote both the downtown and airport developments.

Related: A Year After EB-5 Crackdown, Newport Is Taking Action On A Demolished Downtown Block

"We really did believe that especially having the AnC Bio coming in, that they would need to get their devices and different things in and out very quickly, by FedEx or some other service," Sears says. "We expected some researchers coming in from other places that would go there.”

The Legislature even officially renamed the Newport State Airport the “Northeast Kingdom International Airport” in 2015 — a year before federal and state authorities charged Quiros and Stenger with operating a Ponzi-like fraud.

Sears says the goal had been not just to build up the airport, but to really utilize the airport as a catalyst for economic development in the region. She helped secure federal approval of the airport as a recognized Foreign Trade Zone, which offers tax advantages to import/export businesses.

"And there were supposed to be warehouses up there as well, which really would have made the foreign trade zone hub more of a magnet for other businesses that are around that could use it," Sears says.

The airport build-out was not to be funded by the so-called EB-5 immigrant investor money caught up in those fraud allegations. Nonetheless, when all of Quiros’ assets were frozen because of the case, his long-delayed private developments at the airport ground to a halt.

"We still have an asset. How do we continue on the trajectory of what we can control to do that?” — Trish Sears

The runway has been built, along with other infrastructure improvements. But without Quiros’ money, none of the private developments the runway was supposed to accomodate have been built — not the terminal, not the customs office, not the aircraft manufacturing, not the bonded warehouse. Likewise, all the businesses planned for downtown Newport stalled — before they even started.

Guy Rouelle is the head of aviation for Vermont’s Agency of Transportation. He’s the one who got the federal funding to pay for the runway extension. And he says that, despite the setback, he did not oversee construction of a “runway to nowhere.”

“Absolutely not," Rouelle says. "I will, in any — whatever capacity I sit in — ensure there will be development at that airport. And that’s not a cryptic message. I’m just saying I am strongly supportive and will ensure that that development continues.”

Still, there’s a lot of ground to make up. Trish Sears says it's been hard to come to terms with the let-down.

“It’s been a hard year. I’s been a very hard year to, to go through the stages of grief, and of being angry, being sad, being depressed," Sears says. "We’re still working, though, and I think we always have — we still have an asset. How do we continue on the trajectory of what we can control to do that?”

Now, an airport steering committee is being formed to solicit proposals from different private investors, who may help the state and local towns eventually tap the airport’s economic development potential.