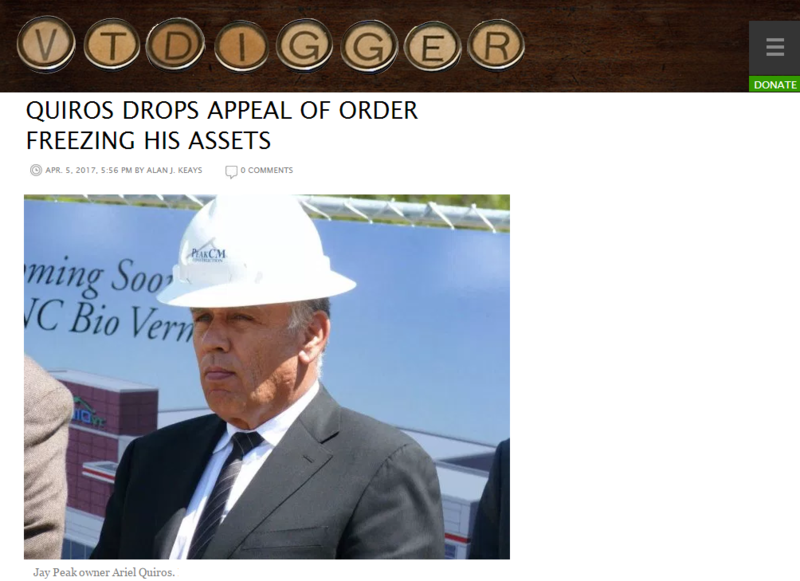 Jay Peak owner Ariel Quiros has dropped his challenge to a ruling that freezes his assets while he awaits trial in the largest alleged EB-5 investor fraud case in the program’s history.

An attorney for Quiros recently filed a notice withdrawing his appeal of a preliminary injunction against him that froze his assets accumulated through investor funds, including Jay Peak and Burke Mountain ski resorts.

Quiros had filed an appeal of that ruling shortly after it was issued by federal Judge Darrin P. Gayles in late November. That decision was in a case brought against him last April by the U.S. Securities and Exchange Commission.

Gayles presides over the SEC case in federal court in Miami where Quiros resides and many of his businesses are located.

The motion to withdraw the appeal came on March 31, the deadline that had been set for Quiros to submit his motion to the 11th U.S. Circuit Court of Appeals in Atlanta. In that filing, he was expected to make arguments about why the preliminary injunction ruling should be overturned.

His former attorneys included those who worked for the firm Leon Cosgrove LLC in Coral Gables, Florida, and several lawyers from Mitchell Sliberberg & Knupp LLP, which has offices in New York City, Los Angeles and Washington, D.C.

Lawyers with the latter firm include David Gordon, who has appeared in court on Quiros’ behalf and represented the Miami businessman as far back as 2014 in depositions taken by the SEC.

The appeals court this week approved Quiros’ request to withdraw the appeal, and the SEC did not object.

The frozen assets, including the ski resorts, are now overseen by a court-appointed receiver, Michael Goldberg.

Goldberg and SEC attorneys could not be reached Wednesday for comment. Lawyers, both past and present for Quiros, did not respond to calls.

Miami Judge Gayles granted the SEC’s request for a preliminary injunction in a strongly worded ruling. The judge wrote that with “severe recklessness,” Quiros intentionally defrauded investors, enriched himself and misappropriated funds.

Also, Gayles added, the SEC had provided “a compelling and well-documented account of one man’s use of his control over multiple entities to squander investor funds, enrich himself, and, ultimately, commit securities fraud.”

In addition to freezing assets, the judge barred Quiros from raising more money through the EB-5 visa program as he heads toward a civil trial, which is set for September 2018.

The SEC, in a complaint filed last April, alleges that Quiros and Bill Stenger, Jay Peak’s former CEO, mishandled $200 million of the $350 million they raised in federal EB-5 immigrant investor funds for seven of eight projects promoted by the developers.

Of that money, the SEC accuses Quiros of “looting” $50 million to cover personal expenses, such as the payment of his taxes and the purchase of the a New York City luxury condo.

The developers raised the money over an eight-year span to pay for major expansions and renovations at Jay Peak, including the building of three hotels and a water park, in addition to other projects in Vermont’s Northeast Kingdom.

One of the other projects, AnC Bio Vermont, a $110 million proposed biomedical research center, had been deemed “nearly a complete fraud” by the SEC.

Because the preliminary injunction froze Quiros’ assets, he was unable pay $3 million in legal bills for his previous legal team, according to court filings.

He sued his insurance company, arguing his policy should cover his legal defense. The company is contesting that claim, but has agreed to provide some money to Quiros, about $100,000 according to court records, as he battles the cases against him.

That $100,000 in funding, according to an order issued this week by Judge Gayles, won’t got to his former attorneys. Instead, the judge said, the money will be used to pay for the services of his new counsel.

In allowing the $100,000 for Quiros’ new attorney, Gayles added that he wasn’t precluding a request for additional funds in the future.

Attorneys are still fighting, court records state, over who should be entitled to be paid with those funds from the insurance company, his previous lawyers or his current one.

A hearing is set for April 12.

Quiros’ former legal team have also filed a “charging lien” in the Miami businessman’s lawsuit that remains pending against his insurance company. The lien is against “any recovery proceeds obtained” by Quiros,’ the filing states.

His past attorneys say in court records that they have only been paid a fraction of the nearly $3 million in legal bills that have accrued in their representation of Quiros since shortly after the federal lawsuit was brought against him last April.

In October, the judge allowed Quiros to use $80,000 from proceeds of a mortgage he took out on a New York City condo to pay legal bills.

The former attorneys have also represented in a similar investor fraud case filed by the state against Quiros and Stenger. He also faces several other lawsuits from investors.

Stenger has settled the SEC case against him. He still faces the lawsuit from the state of Vermont as well as other legal action from investors.

A criminal investigation has been underway since last year.