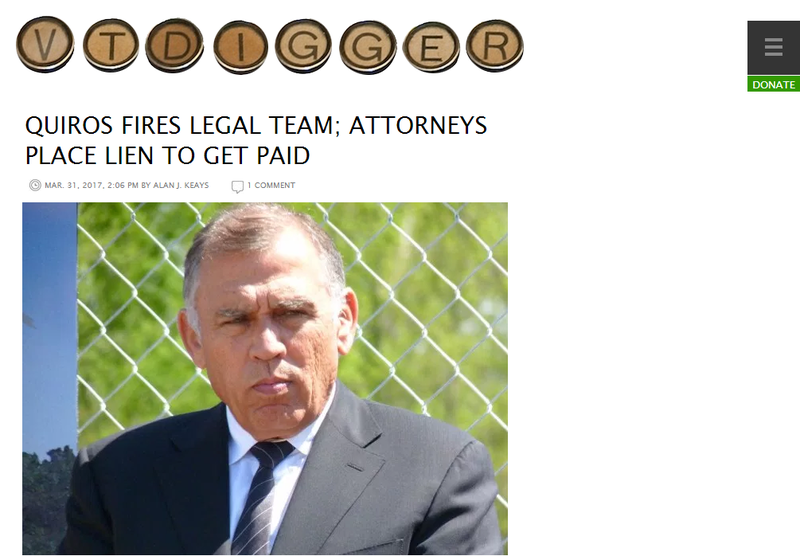 Jay Peak owner Ariel Quiros has fired his lawyers, who have racked up more than $2 million in bills defending him against a federal fraud lawsuit involving $350 million in foreign investors’ funds.

Meanwhile, some of those unpaid attorneys have placed a “charging lien” on any money Quiros may recover from a separate lawsuit he filed against his insurance company seeking coverage for his legal defense.

“Defendant Ariel Quiros has terminated the undersigned law firms and instructed them to do no further work on this matter,” attorney Scott Cosgrove wrote in a motion filed this week in federal court in Miami.

“This motion is not filed for the purposes of delay, and undersigned counsel has taken all steps reasonably practicable to protect the client’s interests,” he added.

The filing says Quiros has replaced his legal team with Miami-based Melissa D. Visconti of Damian & Valori LLP. The case is pending in Miami, where Quiros lives and many of his businesses are located.

Judge Darrin P. Gayles has not yet acted on the request for the legal team to withdraw.

The attorneys have represented Quiros since shortly after the U.S. Securities and Exchange Commission filed a lawsuit in April accusing him of fraud.

The lawyers seeking to withdraw include those with the firm of Leon Cosgrove LLC in Coral Gables, Florida, and several attorneys from Mitchell Sliberberg & Knupp LLP, which has offices in New York City, Los Angeles and Washington, D.C. Lawyers with the latter firm include David Gordon, who has appeared in court on Quiros’ behalf.

The filing does not state a reason for the termination. However, there is another filing this week by the Cosgrove firm in a separate lawsuit brought by Quiros. In that motion, attorneys who had been representing the Miami businessman are again asking a judge to allow them to withdraw from the case.

“Quiros terminated the undersigned law firm’s services, and has made no payment on his outstanding debt,” the filing states. “León Cosgrove, LLC has invested significant time and expenses pursuing Quiros’s claims, and has already provided a benefit to Quiros.”

That motion was filed in a lawsuit brought by Quiros against his insurance carrier seeking coverage for his defense. At the time it was filed in December, his legal bills were pegged at more than $2 million.

The Cosgrove firm in that case has also submitted notice of a “charging lien” against “any recovery or proceeds obtained” by Quiros.

At the time of the filing of the insurance lawsuit, his attorney argued that Quiros faced “financial ruin” and possible abandonment by his legal team if the insurance company did not cover his defense costs and he were forced to default.

The issue of legal fees has been ongoing for Quiros since Judge Gayles in the federal investor fraud case froze most of his assets. In October, the judge did allow Quiros to use $80,000 to pay his legal bills, a fraction of what he had been seeking at that time to pay more than $1.5 million in legal expenses.

Attempts to reach attorneys in the case, both the old one and new one for Quiros, were not successful. SEC attorney Christopher Martin also could not be reached for comment.

Quiros apparently worked out a deal with the insurance company, Ironshore Indemnity, to pay for some of his legal cost while the lawsuit over the coverage proceeds, according to court filings.

His attorneys did not state in court records how much the insurance company was willing to put up. However, the SEC is asking a judge to block Quiros’ access to those funds.

“(The SEC) understands from the Receiver that the insurance company has agreed for now to pay Quiros’ attorneys $1 million in fees and costs, and that a significant portion of that money will cover back bills from December 2016 until the present,” the SEC’s filing states.

Quiros’ attorneys argued in their motions that without access to those funds, they would be forced to leave the case.

“Quiros’s attorneys believe they have an important role in ensuring justice is done in the pending matters,” according to the filing, “but they simply cannot continue to expend additional time and funds on the case if not assured payment.”

A hearing on the matter is set for April 12 in federal court in Miami.

Quiros, along with Bill Stenger, Jay Peak’s former president, are accused of misusing $200 million of the $350 million they raised in an eight-year span from immigrant investors under the federal EB-5 visa program. The money was meant to pay for improvements at the northern Vermont ski area and other projects in Newport and Burke.

Quiros is also accused of looting $50 million of that money to pay for personal expenses, including a condo in New York City worth more than $2 million and to pay his personal taxes.

Quiros denies any wrongdoing, contending in part that he was entitled to the money he received as profits from development fees that were outlined in documents provided to investors.

In the EB-5 program, foreign investors put $500,000, plus a $50,000 administrative fee, into qualified projects. If that investment leads to the creation of 10 American jobs, the investor becomes eligible for permanent U.S. residency.