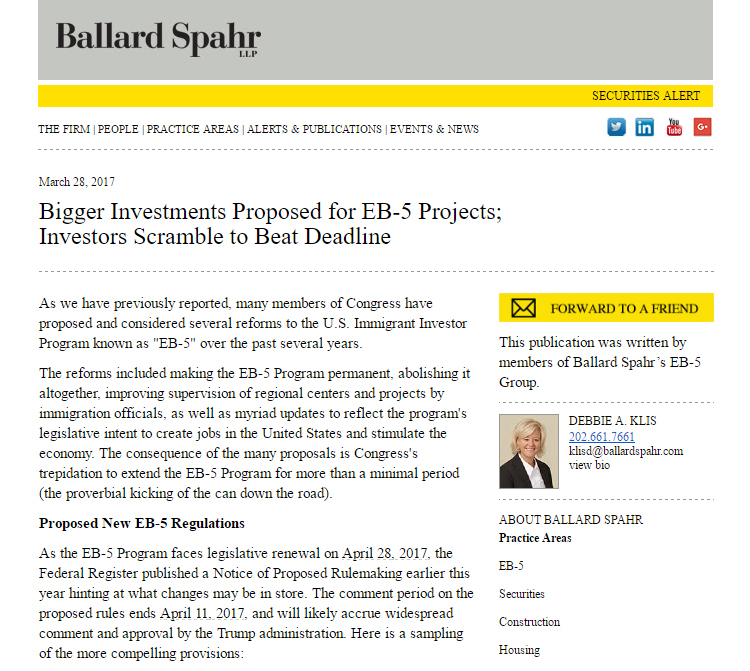 As we have previously reported, many members of Congress have proposed and considered several reforms to the U.S. Immigrant Investor Program known as "EB-5" over the past several years.

The reforms included making the EB-5 Program permanent, abolishing it altogether, improving supervision of regional centers and projects by immigration officials, as well as myriad updates to reflect the program's legislative intent to create jobs in the United States and stimulate the economy. The consequence of the many proposals is Congress's trepidation to extend the EB-5 Program for more than a minimal period (the proverbial kicking of the can down the road).

As the EB-5 Program faces legislative renewal on April 28, 2017, the Federal Register published a Notice of Proposed Rulemaking earlier this year hinting at what changes may be in store. The comment period on the proposed rules ends April 11, 2017, and will likely accrue widespread comment and approval by the Trump administration. Here is a sampling of the more compelling provisions:

Increase to Minimum Investment Amount. The Notice proposes to increase the minimum investment amount to investors in the EB-5 Program to adjust for inflation since investment amounts were set in 1990. The proposal would increase the standard minimum investment to $1.35 million from $500,000 for projects located in a Targeted Employment Area (TEA) and to $1.8 million from $1 million for projects that are not. The TEA amount, set at 75 percent of the standard, would be $1.35 million in 2017. This dramatic increase is disagreeable to all concerned in the EB-5 process and many have advocated for a more gradual phase-in of adjustments. Interested parties are urged to continue to appeal to Congress and the Trump administration for more reasonable amendments.

Concern about the escalation in the minimum investment has caused a rush among wealthy would-be EB-5 Program participants in China, according to published reports. Additional concern by would-be participants in China is compounded by the impending rules enacted by the Chinese government severely limiting foreign currency transfers out of China, which are effective July 2017.

Retention of Priority Date. In a measure that would bring great relief to many parties after many years of advocating by U.S. Citizenship and Immigration Services (USCIS), the Notice proposes to allow an EB-5 petitioner to use the priority date of an approved I-526 petition for any later-filed petition because of a failed project or failed regional center or other subsequent change of any nature. The Notice does not limit why the investors must file a subsequent I-526 petition.

For nearly four years, a regional center seeking expansion of its geographic area had the ease of relying on investors filing I-526 petitions with an amendment request without having to wait for USCIS approval. That policy, set in a May 2013 memo, is superseded by the revised I-924 form published on December 23, 2016, which requires advance amendment for future geographic area advancements. The USCIS will adjudicate all I-526 petitions filed before December 23, 2016, based on the guidance from the May 2013 Policy Memo.

On the other hand, all I-526 petitions filed on or after December 23, 2016, must relate to a geographic area already approved, otherwise it faces automatic denial due to disqualification at the time of filing. Going forward, the EB-5 program has reverted to the pre-May 2013 Policy Memo era where an advance I-924 amendment application to expand the geographic scope of a regional center must be approved before investors can file an I-526 petition based on that expanded geographic area, which will slow the growth of expansion and project investment. In view of the USCIS plan to hire up to 247 employees during fiscal year 2017, the processing times for such amendments should be reduced. The change to the procedure has severe consequences for pending I-526 applications. We have urged the USCIS to reconsider its sudden change to the procedure which will bring harm to the unwary investor.

Preparing for an Audit. The USCIS recommends that before the site inspections, all information originally submitted with any application or certification (and any updates to prior forms) should be available. It is also recommended to organize documents pertaining to projects, marketing, and investors in advance as USCIS' audit team may spontaneously request additional information to verify material provided previously.

Ballard Spahr's EB-5 Group brings together attorneys experienced in securities, private equity, business and finance, real estate, tax credits, and corporate law to assist clients to utilize the EB-5 Program to accomplish their goals. The EB-5 Program has led to nearly $15 billion of foreign investment in the United States and more than 220,000 jobs.