Three things Congress should know about reforming the EB-5 program 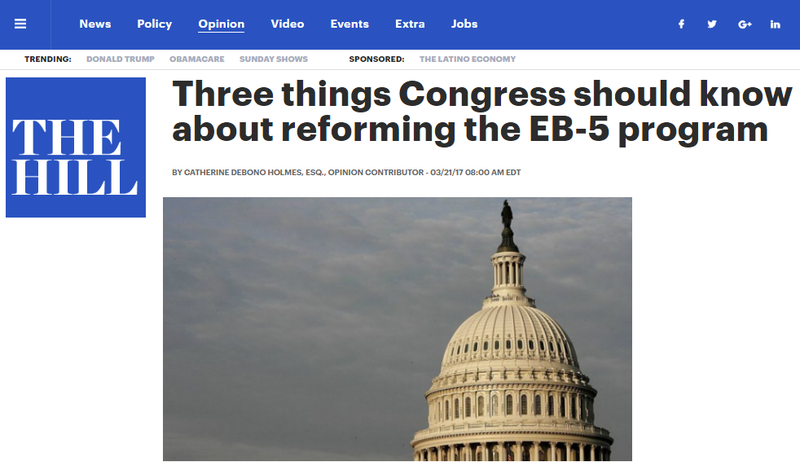 Amid the strident calls for reform or termination of the EB-5 investor visa program, there are some essential facts about EB-5 investors and the EB-5 investment market that should be considered, but have not been part of the debate.  These are facts that help explain why most EB-5 investors select large projects in big cities over small projects in urban areas, and what kind of reforms might change those incentives.  In addition, there are reforms that can and should be adopted to prevent the types of fraud that have tainted the EB-5 program, that are not included in the pending DHS regulations, but should be included in any EB-5 reform legislation.

Why are most EB-5 investors not investing in rural and severely economically distressed areas and what can be done about it?

Some critics of the EB-5 program blame "gerrymandering" of targeted employment areas as the reason why big projects in metropolitan areas raise the most funds using the EB-5 program.  But there is more to the problem than that, and it has to do with the risk that EB-5 investors will lose their visa if the project they invest in fails, through no fault of their own.

In essence, the rules of the EB-5 Program penalize EB-5 investors by denying them their visas if the projects they invest in are not completed or are closed by the owners before those projects have created at least 10 jobs for every EB-5 investor in the project. Even worse, if an EB-5 investor wants to try again and invest in another EB-5 project, the investor has to refile a new application and start over.

For investors from mainland China, who are now 80 percent of all applicants under the EB-5 program, that means another six to eight years' wait. It is understandable that most EB-5 investors, who cannot personally visit or do any due diligence to compare projects, would conclude that investing in a project in a large city with a large developer will give them a better chance of obtaining their visa than a project in a rural or severely economically distressed area. Any reform of the program needs to address the risks to the EB-5 investors of investing in smaller projects in rural or severely economically disadvantaged area, such as be reducing the time period required to obtain a visa for investments in those areas, or retaining their eligibility for a visa if a project fails.

Can EB-5 investment amounts be increased without killing the market and losing the capital this program brings to the US economy?

DHS is proposing to increase the standard minimum investment amount from $1 million to $1.8 million (an 80 percent increase), and from $500,000 to $1.35 million (a 170 percent increase) for projects in a targeted employment area.  These amounts would still be less than the investment required to obtain visas in other countries such as Australia, the United Kingdom and New Zealand, but those countries allow investors to invest in relatively safe investments, such as government bonds, whereas the EB-5 program requires that an investment be made in a project that has a risk of loss (which carries with it the risk of losing the investor's visa, as well as their money). By increasing the required minimum amount too much too fast, it could have the effect of driving investors to other countries whose investor visa program risks are lower than in the U.S.

On the other hand, gradual increases in the required investment amount, particularly if they are known well in advance, can be planned for and accepted by many potential EB-5 investors. It is particularly important that investment amount increases not be made to apply retroactively to investors who have already made their investments in projects who may not be able to increase their investment, or to projects which have already accepted investors, because changing the rules retroactively would be unfair and potentially catastrophic to both the investors and the businesses that have relied on the existing rules in making their investment decisions.

How can the EB-5 investment market reduce or eliminate fraud?