Where is the Love? Arkansas Republican Senator Tom Cotton’s Bill Seeks to Reduce Legal Immigration by Half 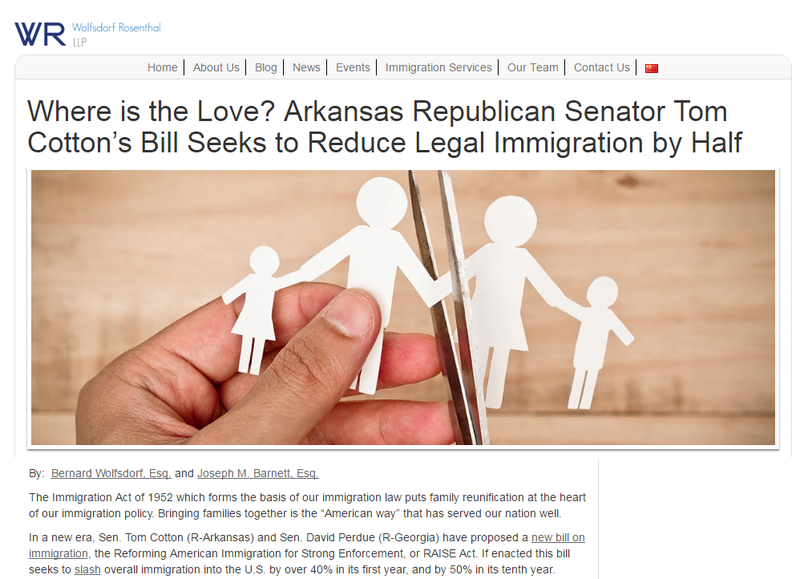 In a new era, Sen. Tom Cotton (R-Arkansas) and Sen. David Perdue (R-Georgia) have proposed a new bill on immigration, the Reforming American Immigration for Strong Enforcement, or RAISE Act. If enacted this bill seeks to slash overall immigration into the U.S. by over 40% in its first year, and by 50% in its tenth year.

This approach is consistent with President Trump’s avowed policy to reduce the number of immigrants into the U.S.  Despite the overwhelming evidence that demonstrates the clear economic benefit of immigrants in the U.S., the Republican senators attribute a decline in wages by U.S. workers to increased immigration by low-skill workers.

The current immigration system allows U.S. citizens and green card holders to petition for certain relatives to come and live permanently in the U.S.  The RAISE Act would eliminate the following types of relatives from obtaining a green card through family-based immigration:

This proposal is inconsistent with one of the major principles currently underlying US. Policy on legal permanent immigration – the reunification of family. Moreover, spouses, parents and children of U.S., citizens, many of whom have been patiently waiting in line for years, will lose out if this bill is enacted to law.

The RAISE Act is not the type of comprehensive immigration reform needed to bring U.S. immigration policy into the 21st century. The U.S. can help our citizens in need, to improve their lives and welfare of our nation, and lead the world into the challenging 21st century. We need smart, compassionate and effective immigration reform that promotes America’s interest by bringing the best and brightest, uniting families, providing skilled and lesser-skilled workers, and welcoming refugees and asylees in a system based on due process and fairness. Finally, we must provide a roadmap to legalization for hardworking, law abiding undocumented persons so they can come out of the shadows, pay taxes and obtain legal stat us. Both President Bush and President Obama, tried and failed, so we can only hope President Trump and Congress will do the right thing and show love for our nation and for our citizens by making America greater and keeping it great.