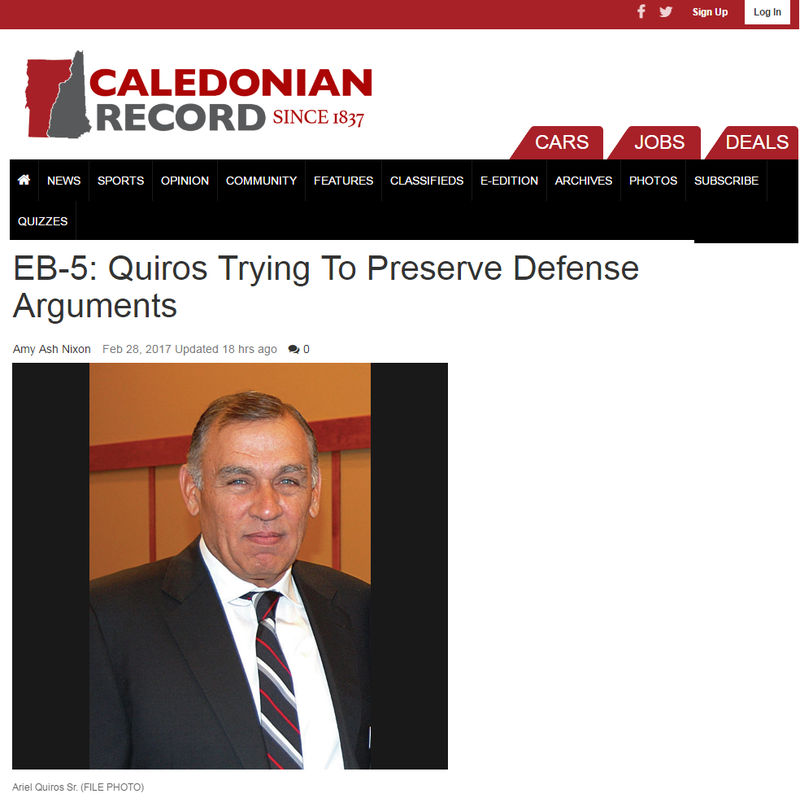 Ariel Quiros, the accused mastermind of an alleged Ponzi-like scheme at various Northeast Kingdom economic development projects, is fighting the Securities and Exchange Commission’s attempt to block the eight defense strategies he plans to mount in his trial next year.

Last April, Quiros and his former business partner, Bill Stenger, were accused of a massive securities fraud, in which federal and state officials accused them of misappropriating more than $200 million of immigrant investor funds in the EB-5 program; Quiros was further accused of having allegedly diverted more than $55 million more of investor funds for personal use.

Quiros, a Miami businessman whose assets have been frozen as the government prepares for his trial in the fall of 2018, has maintained the funds he took were his profits, outlined in investor documents, which he claims he never misrepresented.

In U.S. District Court in Miami, Florida, in recent days, Quiros and his legal team filed a 17-page motion opposing the SEC’s recent efforts before the court asking to strike all of Quiros’s affirmative defense arguments.

The SEC, in a Feb. 1 filing in federal court, asked U.S. District Court Judge Darrin F. Gayles to strike all eight of Quiros’s defenses to the complaint the federal agency brought against him, calling them “improper.”

The SEC legal team accuses Quiros once again of “looting” from investor funds.

The EB-5 program promises immigrant investors permanent green cards once their investments can be linked to job creation or retention.

The federal court put a federal receivership in place last April to oversee the Northeast Kingdom Economic Development Initiative properties, including Burke Mountain and Jay Peak, which has been operating the resorts and other businesses, and trying to pay down millions in debts owed in property taxes, to vendors, and contractors.

Ultimately, the properties will be sold.

The receivership is also working to advocate for the allegedly wronged investors.

Initially, Quiros had claimed 34 defenses against the charges brought by the SEC, but he later filed an amended answer in January of this year, reducing the number of affirmative defenses down to eight.

Among the defenses Quiros is claiming are a statute of limitations in the case the SEC has built against him.

Another of his defenses attempts to distance his responsibility from what allegedly took place saying he “relied in good faith upon the information, opinions, reports or statements prepared or presented by one or more officers or employees of Raymond James & Associates, Inc.”

“It is clear this is nothing more than an impermissible shotgun pleading designed to clutter the case with extraneous issues,” the SEC motion claims of that defense.

The SEC legal team conferred with Quiros’s counsel before they filed the strike motion to try to “narrow the issues by asking Quiros is he would withdraw any of his affirmative defenses. Quiros declined to do so and indicated he would oppose this motion,” the SEC motion states.

The motion opposing the SEC action was filed on Feb. 22 in federal court, the record shows.

Quiros’s attorneys state that all eight defenses are proper.

“Mr. Quiros is merely required to put Plaintiff on notice of his defenses,” his attorneys argue. “The Court should reject Plaintiff’s (SEC’s) argument that Mr. Quiros’s affirmative defenses are inadequately pled.”

The motion claims that the SEC is seeking “disgorgement from Mr. Quiros of at least $191.8 million. As the Court is aware, Mr. Quiros contends that plaintiff’s disgorgement calculations are vastly overstated – particularly given that five out of the seven construction projects at issue are fully built and operating”

“In light of what Mr. Quiros believes to be an inflated disgorgement figure, he should be allowed to argue that such a recovery by the SEC would be an impermissible forfeiture,” his attorneys argue. “Because Mr. Quiros is entitled to plead, and has adequately pled, each of his eight affirmative defenses, the Court should deny Plaintiff’s Motion to Strike in its entirety.”