Insurer Says Quiros Owes The Company, Not Other Way Around 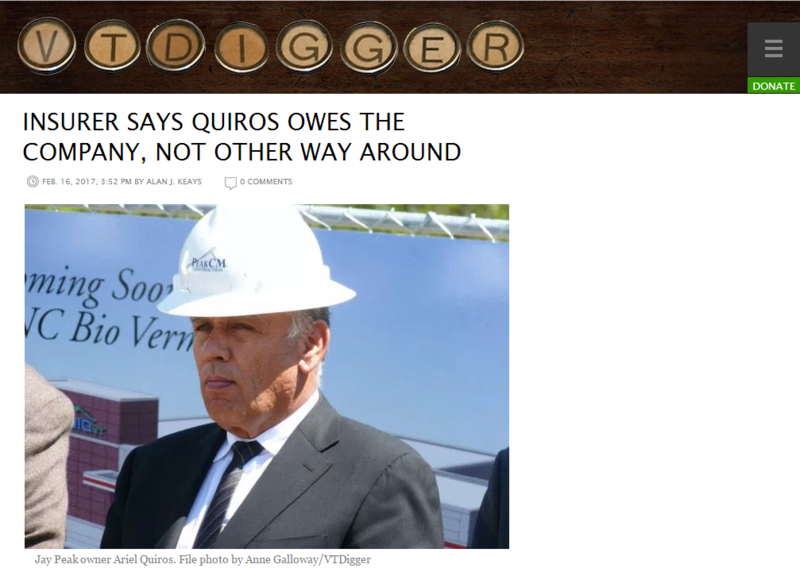 An insurance company is firing back at Jay Peak owner Ariel Quiros, disputing his claim that it has to fund his defense that tops $2 million as he fights off investor fraud lawsuits.

And, in a twist, Ironshore Indemnity Inc. is asking a judge to force Quiros to pay for its cost of defending itself from the lawsuit the Miami businessman brought seeking the coverage.

“Quiros is not entitled to relief to the extent he seeks coverage for self-dealing or fraudulent acts under the Policy,” Joseph G. Galardi, a Florida attorney representing the insurer, wrote in a recent filing.

Galardi raises several possible defenses to Quiros’ claim he is entitled to the coverage under a policy he had with the insurance company. The attorney also filed a counterclaim against Quiros, asking the judge to award Ironshore the cost associated with defending itself.

Quiros isn’t entitled to coverage from the Minnesota-based insurance company, Galardi wrote, because he did not file his claim in a timely manner and did not, in his application for coverage, disclose alleged actions that led to lawsuits against him.

Those allegations are included in federal and state lawsuits brought against Quiros in April.

Quiros, along with Bill Stenger, the resort’s former president, are accused of misusing $200 million in federal EB-5 immigrant investor money. The funds were meant to pay for improvements at the northern Vermont ski area and other projects in Newport and Burke.

Quiros denies any wrongdoing. He sued his former insurance company in December as his legal fees to fight the state and federal actions, as well as others brought by investors, ballooned to more than $2 million.

His attorney argued in the recent filing that Quiros faced “financial ruin” and possible abandonment by his legal team if the insurance company did not cover his defense costs.

Quiros’ lawsuit claims two consecutive policies, stretching from July 7, 2013, to Aug. 7, 2016, with a $10 million liability limit each, were taken out with Ironshore to insure Q Resorts, Quiros’ holding company that includes Jay Peak.

Quiros’ attorney points to a part of the policy that states the insurance company covers claims during the dates the policy was in effect for a “wrongful act.” Under the policy, Quiros is entitled to “reasonable and necessary” legal fees to cover his defense, the lawsuit states.

Neither Galardi nor Quiros’ attorney Derek Léon could be reached Wednesday for comment.

The case is pending in federal court in Miami, the same place as the federal investor lawsuit brought against Quiros by the U.S. Securities and Exchange Commission. Quiros lives in Miami, and many of his businesses are located there.

Quiros can’t access his many assets because a judge in the federal investor fraud case froze them. In October the judge did allow Quiros to use $80,000 to pay his legal bills, which at that time topped $1.5 million.