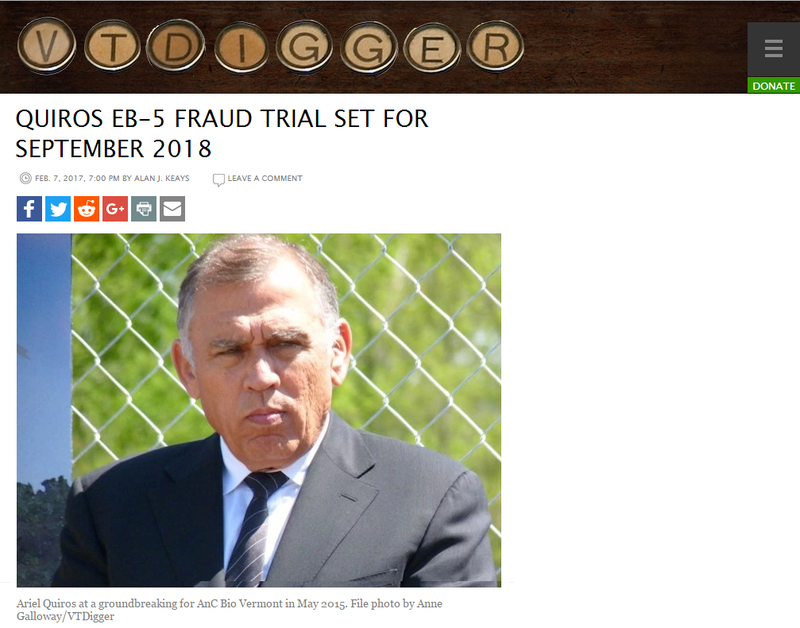 It will be more than a year before Jay Peak owner Ariel Quiros stands trial in federal court on allegations that he orchestrated a “Ponzi-like” scheme to defraud immigrant investors of millions.

Judge Darrin P. Gayles issued a scheduling order Thursday in the civil lawsuit the Securities and Exchange Commission brought against Quiros in April. The order calls for the trial to start Sept. 17, 2018, about 2½ years after the filing of the lawsuit.

The judge also set a deadline of June 2, 2018, for the filing of all pretrial motions. The case is being heard in federal court in Miami because that’s where Quiros lives and many of his businesses are located.

The order, which is only one paragraph, doesn’t say why it will be so long before the trial starts. The judge’s order closely follows a short filing by the SEC laying out a possible schedule for the case.

Robert Levenson, an SEC attorney, wrote in that filing that the SEC, counsel for Quiros, and Michael Goldberg, the court-appointed attorney overseeing the properties at the center of the fraud case, “agreed on the proposed scheduling order.”

Attorneys for the SEC and Quiros could not be reached Tuesday for comment.

The trial date represents quite a delay from one that was proposed much earlier in the case.

In July, shortly after the filing of the lawsuit, the SEC requested the trial start in October of this year. An attorney for Quiros said at that time a trial should not begin until at least 19 months after the start of the discovery process.

In filings submitted over the past several months, attorneys for both parties have talked about the complex nature of the lawsuit, involving financial records stretching back more than a decade. It is the largest alleged EB-5 investor fraud case in the program’s history.

Quiros and Bill Stenger, the former CEO and president of Jay Peak, are accused in state and federal lawsuits of misappropriating $200 million of the roughy $350 million raised through the federal EB-5 visa program.

The money was meant to finance massive upgrades at Jay Peak, including hotels and a water park. Other projects included a new hotel at Burke Mountain and a proposed $110 biomedical research center in Newport that never materialized. Federal regulators have since termed that project “nearly a complete fraud.”

Also, the SEC lawsuit accuses Quiros of “looting” $50 million from investors and using the money to pay personal expenses, including the purchase of a more than $2 million condo at Trump Tower in New York City.

Gayles, in a strongly worded ruling in November, granted a preliminary injunction against Quiros, freezing his assets and prohibiting him from dealing in securities while the case is pending.

“The record supports a preliminary finding that Quiros was the architect of a fraudulent scheme to use the investor funds to enrich himself,” Gayles wrote.

At that same time, Gayles rejected a bid by Quiros to have the case thrown out.

Quiros, in court filings submitted by his lawyers, has maintained that he committed no wrongdoing. He claims that profits he made were legitimate from development fees that investors knew, through legal documents, he was entitled to.

Also, through filings by his attorneys, Quiros contends that if state and federal regulators had not brought a stop to his developments, he would have found more investors to complete them, including the biomedical research center, AnC Bio Vermont.

Stenger has already reached a settlement with the SEC, agreeing in September to cooperate with investigators. He still faces the possibility of a civil penalty, based on his level of cooperation and ability to pay.