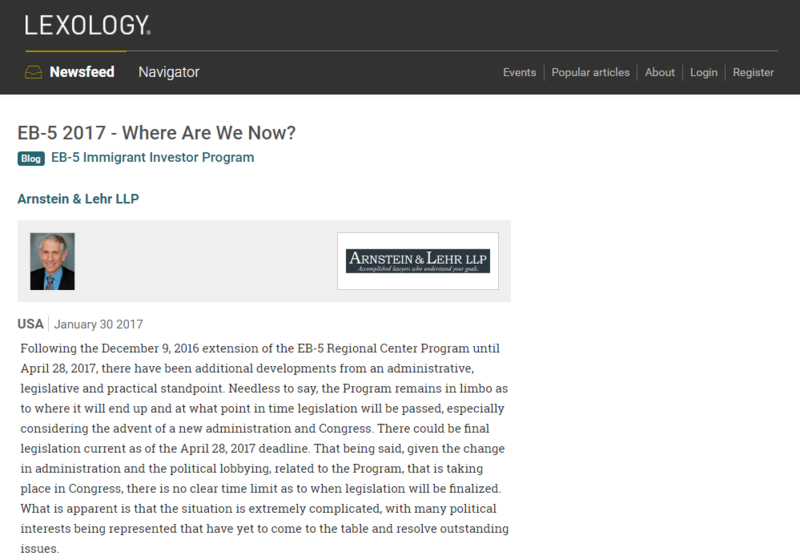 Following the December 9, 2016 extension of the EB-5 Regional Center Program until April 28, 2017, there have been additional developments from an administrative, legislative and practical standpoint. Needless to say, the Program remains in limbo as to where it will end up and at what point in time legislation will be passed, especially considering the advent of a new administration and Congress. There could be final legislation current as of the April 28, 2017 deadline. That being said, given the change in administration and the political lobbying, related to the Program, that is taking place in Congress, there is no clear time limit as to when legislation will be finalized. What is apparent is that the situation is extremely complicated, with many political interests being represented that have yet to come to the table and resolve outstanding issues.

At a recent conference sponsored by the EB5 Investors Magazine, Senator Jeff Flake of Arizona, a very proactive EB-5 proponent, hinted that given the current political climate, it would seem realistic to assume that legislation may not be passed by the end of April and that the EB-5 Regional Center Program would, therefore, be extended beyond the upcoming deadline, until Congress and the administration can agree on new legislation. Senator Flake further stated that he is in favor of increasing the visa count given the benefits of the Program and the significant backlog that has occurred as a result of the retrogression in China.

The industry is questioning the effect that the Trump administration will have on policy-making and the operations of USCIS in the future. Overall, there are many positive signs in connection, given the following:

In assessing the process, it is apparent that the Program is facing the following key issues:

Clearly the Program has become more complicated, expensive, and time consuming. Such additional costs and time delays may serve as a serious detriment to the demand for EB-5 capital as compared with traditional financing sources that may become more affordable and available. I believe that the take away as to the existing marketplace reflects the following:

This will clearly be a transition year that hopefully will end up with a resolution that results in an overall solution that is beneficial to the Program.