Judge: Quiros Can Sell Condo, But Won't Get The Money 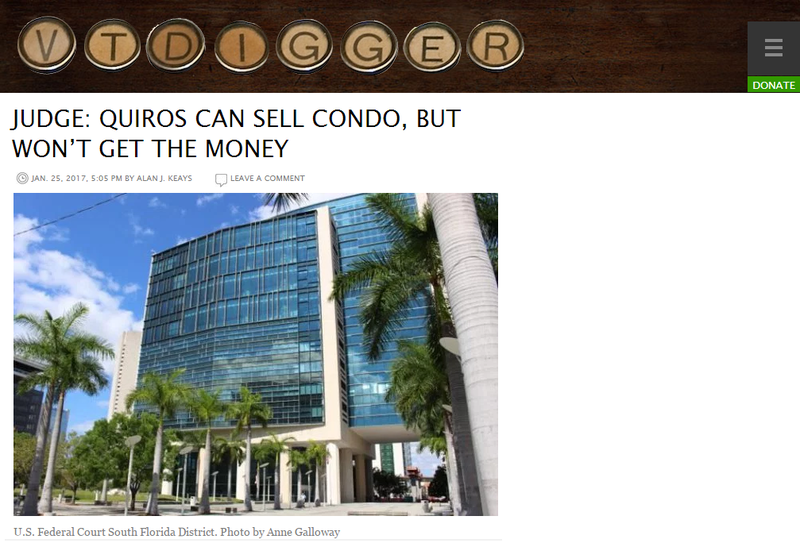 A federal judge will let Jay Peak owner Ariel Quiros sell his New York City luxury condo, but he won’t let him keep the proceeds, at least not right now.

Instead, the funds will go into a trust account held by a court-appointed receiver who is overseeing the frozen assets associated with a massive investor fraud case against Quiros and his one-time business partner, Bill Stenger, former Jay Peak CEO and president.

Quiros has already taken out a $1.5 million mortgage on the condo, which the judge in May allowed for living expenses and attorneys fees. All of the Miami businessman’s assets related to the case were frozen when the Secrurities and Exchange Commission brought charges alleging that he and Stenger defrauded more than 700 investors. Quiors is challenging the state and federal allegations in court.

The repayment on the mortgage for the condo at The Setia on New York City’s Fifth Avenue is due in August, Michael Goldberg, the court-appointed receiver, wrote in a recent filing.

Goldberg added, “Accordingly, the Receiver believes that it is in the investors’ best interest that the Condominium be immediately listed for sale in order to preserve and maximize its value for the benefit of the estate.”

Quiros had previously put the condo up for sale for $7.2 million, but it has not been listed for almost three months, the filing states.

Goldberg wrote that Quiros has agreed to list the property for sale again, and will allow the receiver to get updates from the real estate broker on its progress.

“The Receiver and Quiros have also agreed that the Condominium should be sold for its highest possible value and the proceeds held in trust pending further order of the Court,” Goldberg wrote.

Judge Darrin P. Gayles, who presides in the case pending in federal court in Miami, approved the request this week.

“Quiros shall advise the Receiver of the listing price and if the Receiver disagrees, the parties shall attempt to resolve their differences, or seek further direction from the Court,” the judge wrote.

The case is pending in a federal court in Miami because that’s where Quiros resides and many of his businesses are located.

In May, about a month after the SEC brought its investor fraud case, Gayles approved $15,000 in monthly expenses for Quiros as well as “reasonable” attorney fees from that sale or mortgage of the Setia condo.

In August, Quiros completed the $1.5 million mortgage of the condominium, and wired more than $1 million from the transaction to Goldberg.

According to the recent filing, Quiros borrowed $1.5 million from Estreno, LLC., the mortgagee, secured with a first mortgage on the condo. The loan, Goldberg wrote, has an interest rate of 9.5 percent, “well above current market rates for fully secured residential mortgages.”

Quiros sent the receiver $1,184,000 from the mortgage proceeds. Since that time, Quiros has received four monthly payments of $15,000, as previously ordered by the judge, for living expenses, totaling $60,000.

Also, following a ruling from the judge in October, Goldberg provided Quiros funds from the mortgage proceeds to pay for legal expenses. Quiros had been seeking more than $1.5 million at that time to cover his legal bills, but Gayles only a granted him the ability to use $80,000 to pay his attorneys.

In addition to the SEC case, Quiros also faces a state lawsuit brought by the Vermont Department of Financial Regulation, also accusing him of investor fraud.

In both cases, Quiros and Stenger are accused of operating a “Ponzi-like” scheme to defraud investors. Those investors through the federal EB-5 visa program put up at least $500,000, plus an administrative fee, in projects headed by Quiros and Stenger. If projects they invested in created the required jobs they became eligible for permanent U.S. residency.

The federal and state regulators claim the two developers misappropriated $200 million of the $350 million raised over an eight-year period for the series of projects in northern Vermont. Those projects included a hotel and several other developments at Jay Peak as well as a proposed $110 biomedical facility, AnC Bio Vermont, in Newport, which never materialized.

The SEC, in its case, also claims Quiros “looted” more than $50 million to pay for personal expenses, including the purchase of a $2.2 million condo at Trump Tower in New York City, which is separate from the Setia condo he is now trying to sell.

Quiros has denied wrongdoing. Stenger has settled his case with the SEC, agreeing to cooperate with investigators. He still faces a possible monetary penalty, based on his ability to pay and level of cooperation.