Landlord: Quiros Owes $86,721 In Back Rent For Florida Eatery 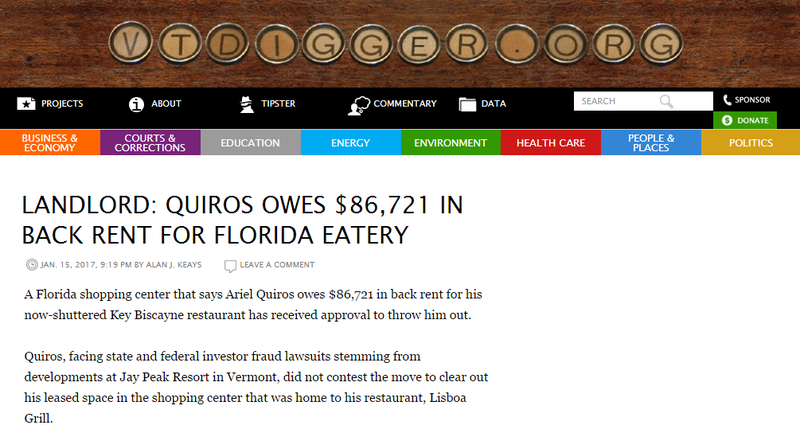 A Florida shopping center that says Ariel Quiros owes $86,721 in back rent for his now-shuttered Key Biscayne restaurant has received approval to throw him out.

Quiros, facing state and federal investor fraud lawsuits stemming from developments at Jay Peak Resort in Vermont, did not contest the move to clear out his leased space in the shopping center that was home to his restaurant, Lisboa Grill.

Galleria of Key Biscayne Inc., the shopping center’s owner, filed a motion in the federal case against Quiros, seeking to retake the space. A federal judge granted that request recently. The Miami businessman and Jay Peak owner signed a seven-year lease on March 28, 2011, for his restaurant at 328 Crandon Boulevard in Key Biscayne.

The filing said Quiros owes $86,721 in back rent and other expenses. Quiros, according to the filing, agreed to “surrender” his lease and “abandon” any rights he had under it. The rent for the 1,656-square-foot space, according to the 2011 lease, was $7,615 a month. The rate increased 4 percent annually.

The shopping center owner did say another tenant had been lined up to rent Quiros’ space, but couldn’t move in because the restaurant was among Quiros’ assets frozen by a federal court.

The restaurant, originally named Tango Hill, closed in May, the filing states. “Lisboa” is Portuguese for Lisbon. The restaurant’s menu included American and Portuguese cuisine.

“Various equipment,” according to the motion, is still in the restaurant space, also among Quiros’ frozen assets. That equipment will be the subject of a future filing to determine if it’s worth trying to sell.

Quiros has been struggling to pay his bills since April, when state and federal regulators brought lawsuits against him alleging he “looted” $50 million in investor funds for expansion projects at the ski resort and other developments in Vermont’s Northeast Kingdom.

The lawsuits also accuse Quiros and Bill Stenger, former Jay Peak Resort president, of misappropriating $200 million of the money raised through the federal EB-5 immigrant investor program. The money was meant to fund a series of projects at Jay Peak and other Northeast Kingdom communities, including a proposed $110 million biomedical research center, AnC Bio Vermont, that federal regulators called “nearly a complete fraud.”

Stenger settled his federal lawsuit. The state lawsuit against him remains pending. Quiros has denied wrongdoing and is fighting the cases against him.