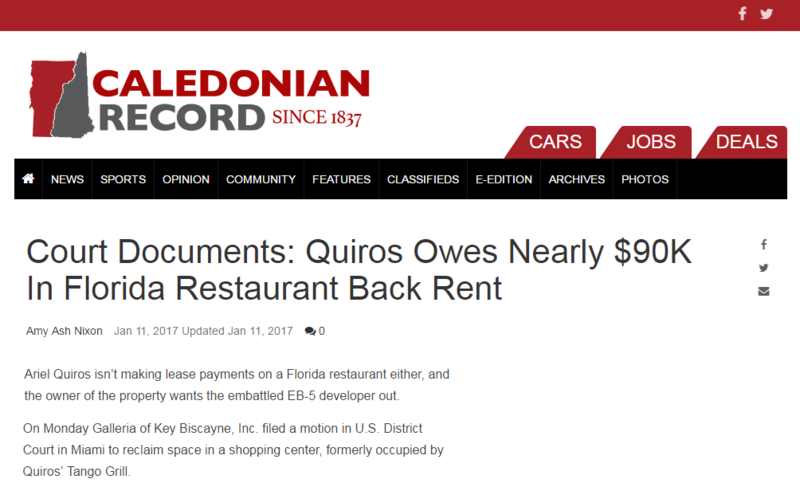 Ariel Quiros isn’t making lease payments on a Florida restaurant either, and the owner of the property wants the embattled EB-5 developer out.

On Monday Galleria of Key Biscayne, Inc. filed a motion in U.S. District Court in Miami to reclaim space in a shopping center, formerly occupied by Quiros’ Tango Grill.

According to the 43-page court filing, which includes information about the federal Securities and Exchange Commission (SEC) legal complaint against Quiros in his EB-5 developments, Quiros has not made payments on the lease for the restaurant since shortly after authorities accused him in mid-April.

Galleria Inc. says that Quiros executed a 7-year lease in March 2011 for the restaurant, and at some point he changed the name of it to Lisboa Grill.

A search online finds that the Lisboa Grill is now permanently closed. An old Groupon discount offer from the Portuguese restaurant, however, said - “Don’t spend time or money shopping for a new dinner outfit – Lisboa Grill’s laid-back vibe accepts jeans, T-shirts, and everything in between.”

“The restaurant is currently closed but remains occupied pursuant to the lease,” the motion states. “Rent is eight months in arrears and the balance owed to Galleria of Key Biscayne, Inc., for rent and other expenses is $86,721.28.”

Neither the federal receiver in charge of Quiros’s assets nor the the SEC have any objection to the lease -formerly held by Quiros - being retaken by the property owner so they can rent it to a new tenant, the court filing states.

Some non-fixture equipment, the motion states, likely does fall within the asset freeze order over Quiros, and it remains on site and its disposition “shall be brought before the court by way of a subsequent motion following the receiver’s determination of the value of the property and whether or not the required expense justifies attempting to sell the equipment,” the filing states.

“As to the leased space, Mr. Quiros has agreed to surrender the premises to the Galleria of Key Biscayne, Inc., and abandon any rights he may have under the lease,” the filing continues.

The owner of the space states through their legal counsel, “Time is of the essence since the Galleria of Key Biscayne has a prospective tenant who is prepared to put a deposit down to lease the space.”

A number of exhibits, including the restaurant lease, and some documents connected with the scandal Quiros is involved in here in northern Vermont, are attached to the motion brought by the restaurant building owner.

The motion states that Quiros closed the business in May, shortly after he was accused by SEC and Vermont authorities in the major securities fraud scandal, the largest case of massive fraud alleged to have happened in Vermont state history.

Quiros has told the owner of the property that they should retake possession of the premises, the motion states.