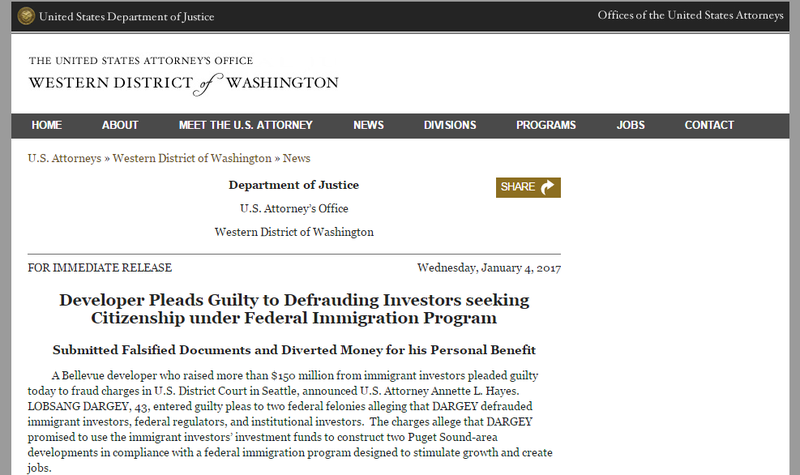 A Bellevue developer who raised more than $150 million from immigrant investors pleaded guilty today to fraud charges in U.S. District Court in Seattle, announced U.S. Attorney Annette L. Hayes. LOBSANG DARGEY, 43, entered guilty pleas to two federal felonies alleging that DARGEY defrauded immigrant investors, federal regulators, and institutional investors.  The charges allege that DARGEY promised to use the immigrant investors’ investment funds to construct two Puget Sound-area developments in compliance with a federal immigration program designed to stimulate growth and create jobs.DARGEY admitted at the court hearing that, contrary to his promises to investors, regulators and others, he secretly diverted tens of millions of dollars of investor funds to unauthorized uses and attempted to make up the resulting funding shortfall by raising additional capital using falsified financial records.

“Mr. Dargey exploited the dreams of his investors to line his own pockets,” said U. S. Attorney Annette L. Hayes.  “He promised to use the money he received in a way that would allow investors to apply to become permanent U.S. residents.  Instead, Mr. Dargey secretly sent millions of dollars overseas and used millions more for his own pet projects.  In doing so, he harmed his investors financially and risked their dreams of legal status in the United States.”

According to records filed in the case, between 2012 and 2015, DARGEY recruited overseas investors, primarily in China, to fund two development projects – one in Everett, Washington known as the “Path American Farmer’s Market” and one in Seattle’s Belltown neighborhood known as the “Potala Tower.” DARGEY promoted the projects under a federal program known as the “EB-5” program, which allows immigrant investors to qualify for permanent residency if they create American jobs by investing $500,000 in a qualifying American business project.  DARGEY represented to the immigrant investors and to the U.S. Department of Homeland Security that he was investing all of investors’ funds in the Everett and Seattle projects in compliance with program requirements.

DARGEY admitted at the court hearing that, contrary to his promises, he used tens of millions of investor dollars for uses not allowed under the federal program and not disclosed to investors.  This included approximately $11.5 million of investor funds that DARGEY secretly used to pay unauthorized sales expenses, including sales commissions to Asian brokers, as well as $16.8 million that DARGEY used for unrelated real estate projects.  In addition, DARGEY told investors and the United States government that DARGEY would contribute $32.5 million of his own money toward the projects. DARGEY admitted at the hearing that, in fact, he made no contribution to the projects.  DARGEY’s fraud resulted in tens of millions of dollars in funding shortfalls for the projects.  DARGEY admitted that he attempted to fill these shortfalls by using a falsified bank statement to obtain a $25 million construction loan, and by using altered financial statements to obtain $60 million in additional funding from a private institutional investor.

DARGEY’s fraudulent conduct came to an end in August 2015 when the Securities and Exchange Commission filed a civil suit and won a court order freezing his assets.The FBI simultaneously executed search warrants at DARGEY’s offices in Bellevue and Everett.

Each of the two criminal counts carries a prison term of up to five years, for a total maximum term of ten years.  DARGEY has agreed to provide restitution of more than $24 million to the investors. Sentencing is currently scheduled in front of U.S. District Judge Thomas S. Zilly on April 6, 2017.

The case is being investigated by the FBI and is being prosecuted by Assistant United States Attorneys Justin Arnold and Seth Wilkinson.  The Department of Justice appreciates the assistance of the Securities and Exchange Commission and United States Citizenship and Immigration Services in connection with this matter.