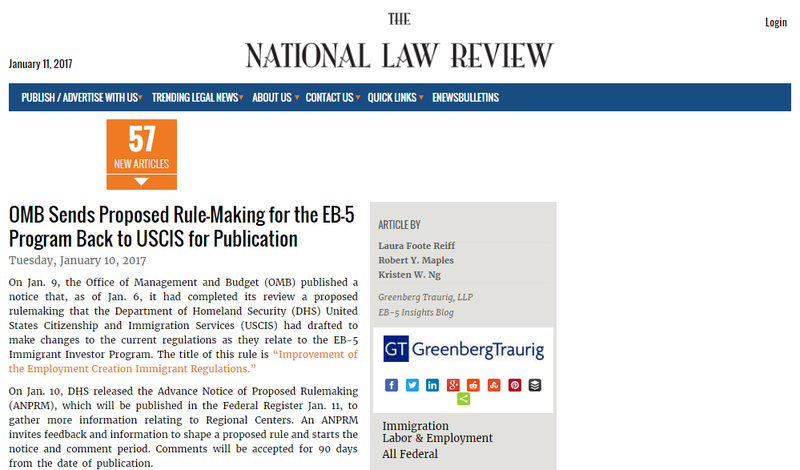 On Jan. 9, the Office of Management and Budget (OMB) published a notice that, as of Jan. 6, it had completed its review a proposed rulemaking that the Department of Homeland Security (DHS) United States Citizenship and Immigration Services (USCIS) had drafted to make changes to the current regulations as they relate to the EB-5 Immigrant Investor Program. The title of this rule is “Improvement of the Employment Creation Immigrant Regulations.”

On Jan. 10, DHS released the Advance Notice of Proposed Rulemaking (ANPRM), which will be published in the Federal Register Jan. 11, to gather more information relating to Regional Centers. An ANPRM invites feedback and information to shape a proposed rule and starts the notice and comment period. Comments will be accepted for 90 days from the date of publication. The ANPRM seeks comments on several topics relating to the EB-5 Regional Center Program, including the process for designating entities as regional centers, establishing requirements for regional centers to utilize the exemplar filing process, the process to maintain regional center designation, the process to terminate regional center designation, and measures for ensuring safeguards for monitoring and oversight.

OMB clearance is the last procedural step in the rulemaking process. DHS can now release a Final Proposed Rule at will. Those regulations, as previously reported, will purportedly include changes that will result in increased investment amounts and change the way targeted employment areas (TEAS) are determined. We anticipate that further proposed rules could be released in the next few days and will include changes to TEA designation and minimum investment amounts.