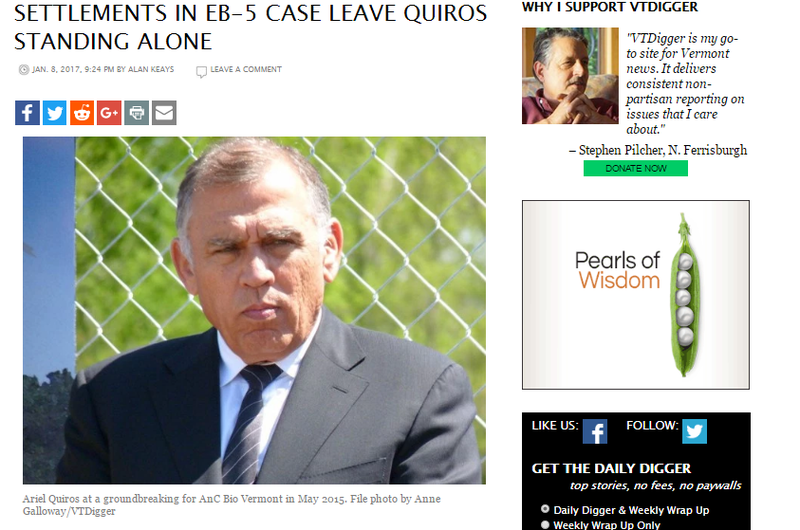 Jay Peak owner Ariel Quiros is now the only defendant left in a case brought by federal regulators alleging the largest fraud in the history of the EB-5 immigrant investor program.
Federal Judge Darrin P. Gayles issued an order last week approving a filing by Michael Goldberg, the court-appointed receiver overseeing the properties and assets associated with the case, that settles lawsuits against a slew of corporate and relief defendants named in the action.

Those defendants were recipients of funds raised through the EB-5 program, which Quiros, a Miami businessman, and Bill Stenger, the former president and CEO of Jay Peak, used to pull in money for projects in the Northeast Kingdom.

Most of the entities named in the case brought by the U.S. Securities and Exchange Commission in April were under the control of either Stenger or Quiros.

The entities include North East Contract Services Inc., which Goldberg now has authority over and which had been headed by William Kelly, a longtime business associate of Quiros.

As part of the order, Gayles wrote that “upon motion” by the SEC he would decide on possible civil penalties and whether it is “appropriate to order disgorgement of ill-gotten gains and prejudgment interest on disgorgement.”

As the receiver, Goldberg has oversight over all the relief and corporate defendants, and in that role consented to judgment against them in the SEC lawsuit.

The developers raised money from immigrant investors to pay for a series of projects at Jay Peak ski resort and a proposed $110 million biomedical research center in Newport, called AnC Bio Vermont, which never materialized. Kelly was paid $7.9 million for services he allegedly provided for that project.

Relief defendants are entities that have received “ill-gotten gains,” though they may not have necessarily taken actions that led to the fraud allegations.

The corporate defendants include six limited partnerships formed to raise money for the Jay Peak projects as well as for AnC Bio Vermont.

Quiros has denied wrongdoing in the case. Stenger settled with the SEC. He agreed to cooperate with investigators and faces a possible civil penalty. A state lawsuit alleging fraud remains pending against them.