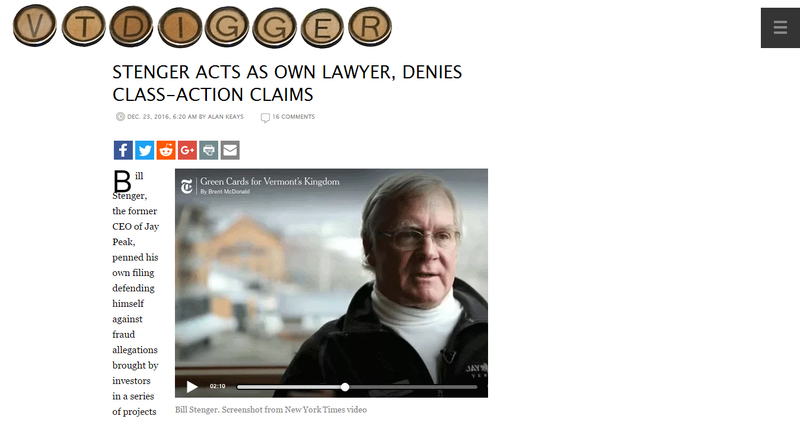 Bill Stenger, the former CEO of Jay Peak, penned his own filing defending himself against fraud allegations brought by investors in a series of projects he headed with his former business partner Ariel Quiros.

Stenger earlier this year settled an investor fraud lawsuit filed against him by the U.S. Securities and Exchange Commission, neither admitting or denying the allegations.

However, in a filing this week in a class-action lawsuit brought by investors against him and others associated with the investor-funded development projects, Stenger denied wrongdoing. He points the finger of blame at Quiros, Jay Peak’s owner as well as a defendant in the case.

The allegations in the class-action lawsuit, led by Brazilian investor Alexandre Daccache, closely mirror claims made by the SEC in their lawsuit against Stenger and Quiros.

It’s unclear if Stenger’s filing this week in the class-action lawsuit constitutes a breach of his earlier settlement with the SEC regarding his agreement to not challenge the claims against him.

Christopher Martin, the SEC attorney, could not be reached Wednesday for comment.

Attorney David Cleary, who represents Stenger in a separate case, said Wednesday that the agreement with the SEC relates only to that case.

“In other litigation, it’s another issue,” Cleary said. “I don’t think it restricts what he has to do to defend himself in other actions.”

Cleary added that Stenger is representing himself in the Daccache case because he has “limited resources” to pay for legal services.

The filing by Stenger is titled as an “answer” to the class-action lawsuit brought by Daccache and other investors. In the 39-page submission, Stenger stridently challenges the claims against him and demands a trial.

He added, “Allegations made against Ariel Quiros and others on this issue, particularly with regard to personal use of funds by others than myself appear accurate, based on information obtained in connection with the SEC litigation.”

The Daccache lawsuit was brought on behalf of a proposed class of 836 people who collectively invested more than $400 million in several projects led by Quiros and Stenger. The projects spanned eight years in northern Vermont, with money raised from foreign nationals seeking green cards through the federal EB-5 immigrant investor program.

The suit was filed after the SEC as well as the state of Vermont brought investor fraud lawsuits against Stenger and Quiros. Those actions claimed the two men misused $200 million in investor funds meant to pay for projects in Vermont’s Northeast Kingdom, including hotels at Jay Peak and Burke Mountain.

Both the SEC and Daccache cases are pending in federal court in Miami, which is where Quiros lives and many of his businesses are located.

Stenger, in his filing this week in the Daccache class-action case, contends that he was not aware that he was he was assisting Quiros in any fraud scheme.

“I still do not know, understand, or have sufficient information to understand or appreciate all of these claims regarding the movement and commingling of EB-5 funds which were apparently, unbeknownst to me, occurring in connection with Mr. Quiros’s accounts at Raymond James in Miami, Florida,” Stenger wrote. “I certainly never knowingly participated in any fraudulent Ponzi, or other scheme.”

Stenger added that he was “never knowledgable” about Quiros’ use of margin loans to apply investment funds for any EB-5 projects, including the improper use of investor funds for completion of earlier EB-5 projects.

Those statements appear to contradict information obtained in the SEC case from former accountants at Jay Peak, Michael Dupont and John Carpenter.

The SEC referred to an email on Jan. 27, 2009, in which Dupont complained to Stenger that he hadn’t been able to get bank statements from Quiros starting in August 2008. Stenger said in his deposition with the SEC that he didn’t remember the conversation the email referred to.

The SEC pointed out that Stenger had said he didn’t recall any conversation about margin loans, but Dupont referred to a shortfall in the accounts and pointed out the statements showed “ready access margin loans” had been taken out against the investor funds.

According to the SEC lawsuit, Quiros, from 2009 to 2012, leveraged $105 million in investor funds for margin loans.

Later that year Dupont left Jay Peak. He was replaced by John Carpenter, who, in his deposition with the SEC, said he realized the developers were commingling funds and using money from new investors to pay for previous projects and resort operating expenses.

In his answer to the class-action lawsuit filed this week, Stenger wrote, “I realize what the United States SEC has claimed, but l was never knowledgeable of, nor did I participate in the masterminding in any way of any scheme to deprive the investors of anything.”

Cleary said Wednesday that it wasn’t a commingling of the funds that was taking place. Instead, he said, a percentage of the “partnership proceeds” from subsequent projects was being used to complete earlier projects, which was permitted as long as it was done “within the confines of the private placement memo.”

“(Stenger’s) agreement with Quiros was no money would be taken and put anywhere except in the projects until the last project had been completed,” Cleary said.

As part of his settlement with the SEC, Stenger has agreed to cooperate with investigators. He still faces the possibility of a monetary settlement, to be determined based on his level of cooperation and ability to pay.

Stenger continues to work at Jay Peak. Sources say he comes in on a daily basis, continues to drive a company car and occupies an office at the ski area. Michael Goldberg, the court-appointed receiver, has said he is paying Stenger $50 an hour for special projects, the equivalent of $100,000 a year.

The state case, in which Clearly is serving as Stenger’s attorney, remains pending. Cleary filed an answer to that lawsuit denying the allegations and asking for a jury trial.

Quiros is challenging the state and federal lawsuits. He is also contesting the allegations against him in the Daccache class-action case.